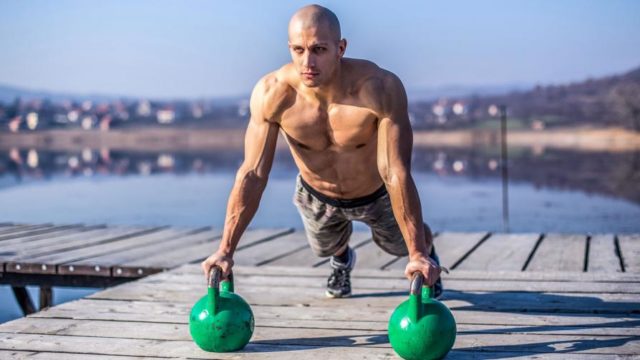 IF YOU’RE TRYING to get in shape, you’ve probably gotten plenty of “tips,” either from friends or from online resources. These pieces of advice include only eating whites of eggs, avoiding milk, and making sure to keep your heart rate at a certain level during cardio.

Our take? Don’t listen to those guys.

Trainers and researchers are learning more about the science of building muscle and losing weight every day, and as a result, implementing strategies that would give some gym veterans a panic attack could actually help you get better gains. Here’s ten examples.

1. Lift weights to increase your flexibility

By performing weight-training exercises through your full range of motion, you can build strength and extensibility in your muscles and connective tissues all at once, says Bill Hartman, P.T., C.S.C.S., an Indianapolis-based strength coach. “Exercises such as lunges, chinups, squats, and Romanian deadlifts improve your performance in the gym and on the sports field better than static stretching,” he says. (Note: Hartman does recommend static stretching for injury prevention-see The Rehab Clinic on page 134 for an example.)

There’s been a backlash against the stuff in recent years due to the fat and high calorie content. But switch to skim and you’ve got one of the cheapest, simplest, and most effective post-workout shakes available. “Twenty ounces provides an ample serving of carbs and both whey and casein protein, two kinds that are absorbed at different rates,” says Hartman. “The combination is ideal for supporting growth right after a workout.”

3. Put more weight on one side

“When you lift outside the gym, whether it’s grocery bags or boxes,” says Joe Stankowski, a trainer in Wilmington, Del., “you’re rarely handling the same load on each side of your body.” That’s why it makes sense to train with asymmetrical loads-particularly, unevenly weighted dumbbells. “Start with 5%-10% more weight on one side than the other,” says Stankowski. In your next workout, lift that heavier weight with your other hand. The uneven load will force your muscles to work harder to balance the weight, shocking your body into new growth. But be careful: Always use weights you’re sure you can handle safely and with good form.

4. Don’t lower the bar to your chest on a bench press

“Pull it there,” says Stankowski, who learned the trick from powerlifting legend Ed Coan. “Actively bringing the bar down to your body forces you to engage your lats-muscles that are crucial for supporting your bench press and lifting big weight.” But take it easy: Pull the bar down with control for safety.

5. Don’t do cardio in the “fat-burning zone”

It’s one of the oldest myths in fitness: the notion that you need to raise your heart rate to a certain level and maintain it for a certain amount of time in order to burn the most fat. “That’s utterly untrue,” says Alwyn Cosgrove, C.S.C.S., a strength coach in Santa Clarita, Calif. “The idea is based on the fact that low-intensity exercise burns a higher percentage of calories from fat than high-intensity exercise,” which is fueled more by your carbohydrate stores. “But it’s a higher percentage of a smaller number.” Think about it: Reclining on a couch is about as low-intensity an activity as there is-which means the calories you burn just lying there are primarily from fat-but because you’re burning so few calories overall, it’s hardly an effective method for fat loss. “Forget about the diagrams hanging on the cardio equipment,” says Cosgrove. “Do high-intensity intervals or lift weights.” You may not burn quite as high a ratio of fat to carbs, but you’ll burn substantially more calories overall, leading to greater fat loss.

6. Go below parallel on squats

Contrary to the advice of many trainers, studies have shown that the lower you squat, the less you risk injury. “Ask any orthopedic surgeon where the knee joint is most unstable,” says Cosgrove, “and he’ll say ‘at 90 degrees'” (when your thighs are about parallel to the floor). That’s because the shinbone is able to shift around more in relation to the thighbone at that position. Add to that the fact that, because the range of motion is shorter, you can add more weight to a parallel squat than you can to a full squat, and you’ve increased the damage risk even more. In addition, when researchers at the University of Connecticut compared the results of two subject groups-one that squatted as deep as possible, and one that squatted only to parallel-they found that the full squatters added significantly more muscle to their thighs.

7. Eat eggs yolk and all

“Eggs are one of the most nutrient-dense foods out there,” says Jeff Volek, Ph.D., R.D., professor of exercise physiology at the University of Connecticut. Each one provides a good serving of vitamins and minerals-such as vitamin E, iron, and zinc-and six or more grams of easily digestible protein (with all the essential amino acids). While it’s true that a large egg yolk contains four to five grams of fat, it’s primarily the hearthealthy, unsaturated kind. “Egg yolks also contain choline,” says Volek, “a substance that breaks down fat, helps make up the membranes of nearly every cell in your body, and produces neurotransmitters.” Need another reason to scramble over to the dairy aisle? When compared with the price of meat and fish, eggs are one of the cheapest muscle foods on the market.

“Everything you eat tells your body either to burn fat or to store it,” says Toronto strength coach Craig Ballantyne, C.S.C.S. The foods you consume cause strong hormonal responses in your body, particularly from insulin-a hormone that can shut down fat-burning in a hurry. “One of the most important fat-loss strategies is to not let your insulin levels climb too high at any time in the day,” which you can accomplish primarily by following a high-fiber, low sugar diet, says Ballantyne. At the same time, elevated levels of insulin can be very beneficial immediately following a workout, when the body needs a fast protein fix. “Insulin can effectively carry protein into your muscles,” Ballantyne says, “leading to faster recovery from your workout and greater growth.”

A complex is a series of barbell exercises performed one after the other without rest. Doing a few after your weight routine will not only help you burn more fat than the treadmill but will also reduce the risk of your body using its muscle tissue for fuel (a danger with any cardio activity). “Complexes work much the way intervals do,” says Hartman, “by stimulating a lot of muscle and forcing your body to burn more fat during and after the workout.” For example, perform 10 reps of these exercises in the following order: good morning, squat, push press, front squat, Romanian deadlift, and bentover row. The weight you use should be the most you can handle on your weakest exercise in the complex. (So, if you can do only 10 reps with 135 pounds on the front squat, use 135 for every exercise.) Rest three times as long as it takes you to complete, then repeat 3-10 times, depending on your level of conditioning.

While performing chin-ups before arm curls, for example, is a good rule of thumb, it isn’t a flawless formula for growth. “Muscles don’t work alone,” says Cosgrove, “so if your chin-up is weak, it could very well be the result of weak biceps, which help you complete the movement.” A better rule of thumb: “Train whichever muscles are weaker first, even if it means violating other rules you’ve heard.”

Here’s why you should never lift heavy in running shoes