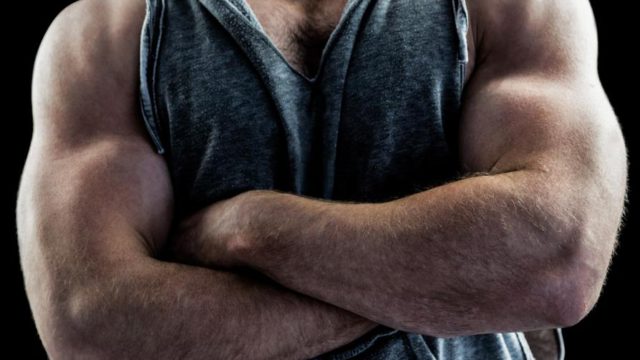 WHEN MOST PEOPLE size up the results of a good pump, they look to the arms for evidence. There’s something about Popeye-worthy biceps and razor-sharp triceps that act as proof of a workout done well. To develop that balance of mass and strength, you have to carefully hone both the front and back of the arms.

These biceps- and triceps-focused exercises—from trainers Josh Holland of Zoomtion Fitness in New York, Jesse Jones of Basecamp Fitness in California, and Eric Emig of Evolution Fitness in St. Louis—provide a serious call to arms. Just don’t blame them if you struggle to button your shirt the next day.

Pretty much what it sounds like, lowering yourself halfway into a pushup and hovering provides a crazy isometric burn for pretty much the entire upper body, and the triceps in particular. Hold for 15 seconds up to a minute, take a minute break, and repeat, going for three rounds.

Often used as a learning technique when building the strength to perform multiple reps of pullups or chinups, prolonging the time you hold your head above the bar gets at that isometric stability Holland loves. Slowly lowering yourself down to straight arms once the hold is complete really pushes that strength-building—it’s actually more taxing on the muscles to lower slowly with control (the eccentric contraction) than it is to pull up (the concentric). An overhand pullup grip works the tri’s more, while using an underhand chinup grip hits the bi’s. Aim to hold your chin above the bar for 15 seconds to a minute before lowering slowly and resting for a minute. Do it three times.

Holland says: “It’s a great way to build pullup strength, and helps to balance out the concentric and eccentric components of doing a pullup or chinup.”

It wouldn’t be an arms article without at least a few variations on biceps curls. This first one is an oldie but goodie, using heavy dumbbells. Hammer curls keep your hands thumbs up, which requires you to stabilize your wrists. Go as heavy as you can handle for 10 reps—and then do curls in three one-minute sets, with a minute’s rest in-between. Play with doing the curls simultaneously, one arm at a time, or alternating, but no matter what, lock those elbows into your sides and don’t use body momentum to throw the weight up.

Jones says: “This is the best way to build biceps and forearms. I prefer neutral-grip because it reduces the stress on the wrists and elbows that we commonly see in overuse injuries such as elbow tendonitis.”

Up your curling game by adding isometrics to the mix. Hold one arm in a 90° bent position while doing a full-range hammer curl with the other arm—and go until you can’t do anymore, then switch sides. Three sets should be all you need.

Jones says: “The complexity of this exercise seems to take my mind away from the burn.”

Similar to a skull crusher, Emig prefers to take the hands down behind his head for a greater and full-range development of the triceps. Load an EZ-bar with around 15lbs per side. Lie down on a bench, and press your arms straight over your chest. Bend the arms, bringing the weight down and over the top of your head, keeping those elbows pointed straight at the ceiling. Press back to straight. Emig recommends four sets of reps—12, 10, 10, and 8—with a minute rest in-between.

Emig says: “I like these done super-strict with no movement at the shoulders, because they really isolate and fire up the long head of the triceps. I am always sore the next day after four good sets of these.”

Another one from the files, dips are magic for the tri’s, as long as you do them without sacrificing your shoulders. Start simply, with your hands on the edge of a bench, legs bent, hips up. Before you even consider bending your elbows, widen your chest and keep it proud, shoulders back. Bend your elbows straight back, again, focusing on your shoulder position, only going as low as you can without sacrificing your form. Start with 30 seconds and work up to a minute per set, with a minute break in-between. Once you’ve mastered the bent-leg version, go for straight legs, resting on your heels. Emig even likes to kick it up further by elevating the legs on a bench, too.

Jones says: “This one you can even do between commercials watching Marshawn Lynch going Beastmode on Sundays. After 60 seconds, your triceps will be on fire.”

This curl variation has the elbows moving back at the same time as they bend, which isolates the biceps even more intensely. Step on a band that’s either a loop or has handles. Grasp it with an underhand grip, arms right alongside the body—the band should be already at tension with your arms straight (if not, you may need to loop it around your feet). As you pull up to bend your arms in a curling action, aim your elbows back behind you and keep the hands very close in front of the torso. Slowly lower back to straight. Go for 10 to 20 reps for three rounds, taking a one-minute rest in-between.

Holland says: “The band maximizes tension on the biceps, and helps to take away the swinging motion of the body. The movement helps to get some work in the upper back.”

8. Triceps extension from wall or floor

A triceps exercise that gets the core into the mix? Yes, please. Level 1: Stand a few feet out from a wall, and place your hands on it, so your body is in a plank position. Bend your elbow back toward the sides of your body to bring your face closer to the wall, then press out to re-straighten your arms. Level 2 takes it down to the floor, in a modified knee pushup position. Again, slowly bend your elbows back toward your sides, and push up to re-straighten them. Level 3 sets you up in full pushup position, with a slight pike at the hips. For all, aim for 10 to 20 reps in each of three sets, taking a one-minute rest in between.

Holland says: “This is a great way to isolate the triceps with the shoulders in a stable position. Most people start to feel it around rep 15 on the wall, and sooner on the floor.”

Yet another curl variation, this one further pushes full range of motion without strain on the lower back. Load a cable machine with around 60lbs on the stack and lower it, clips with a straight bar, to a foot or so off the ground. Lie down on your back, knees slightly bent, and feet resting on the machine. Lock your elbows at your sides, and curl the bar to your chest, keeping your head resting on the ground. Slowly lower back down. Go for four sets in Emig’s rep scheme of 12, 10, 10, 8, with a minute between each set.

Emig says: “You can curl a lot of weight without straining your back even after you’re tired from standard curls. They are a strict move that provide constant tension from top to bottom range.”

A favorite of many, this is a great triceps finisher, especially if you go light and focus on your control. Set the cable machine at 60lbs or so, with the rope attachment above your head. Stand with feet planted, and grasp the rope handles, pulling them down so your elbows are at right angles, locked at your sides. Press slowly straight down toward your legs, bringing the handles apart and around your thighs for the full range of motion. Hold here for two seconds, then with the utmost control, raise back to the right angle. Go for four sets, with a minute rest between, of 12, 10, 10, 8.

Emig says: “I like including this move because it really develops the outside horseshoe shape of the triceps. With the two-second hold, it really burns it up.”