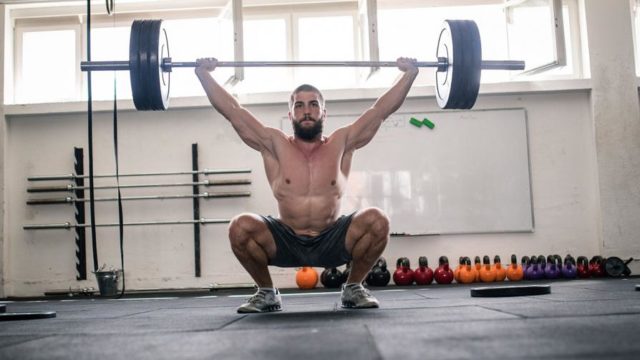 “ADDICTED.” “HOOKED.” THEY aren’t typically words you hear about workouts that have been known to leave people barfing more than once.

“CrossFit is an fitness approach that people really buy into and enjoy,” says Wayne Stokes, M.D., director of sports medicine at the NYU Langone Medical Center’s Rusk Rehabilitation. “It doesn’t matter what’s going on, they aren’t going to miss their Workout of the Day. They get addicted.”

If CrossFit has a cult-like following, what’s making so many people drink the (Paleo approved) Kool-Aid? Basically, that CrossFit takes an approach to fitness that is different than what anyone else in fitness is doing. It steps up where other workouts fail, and, after every rep is said and done, is way more than a workout.

Read on to learn the 10 ways CrossFit is different from every workout you’ve ever tried.

Running will increase your endurance. Weightlifting will strengthen you up. Cycling will turn your legs into rock-hard tree trunks. Meanwhile, CrossFit takes a “Jack of all trades, master of none approach” to fitness, says Kevin Hughes, C.S.C.S, a certified CrossFit coach and owner of FTF Fitness in California. It’s right there in the brand’s definition of fitness: increased work capacity across broad time and modal domains.

Basically, that means you’re faster, stronger, and better at a whole heckuva lot of exercises. “CrossFit has challenged specificity, or training according to your goal,” he says. “The workout’s not based on any goal other than to get better in a general way.”

Every day is different

“We want to have people be really well-rounded, and you can’t be well-rounded unless you do a lot of stuff,” says Russell Berger, head trainer and spokesperson for CrossFit. He notes that CrossFit methodology is based on the belief that routine is the enemy. “We want people to complete some work with the greatest variety of exercises possible,” he says.

Hence why you can come into a CrossFit gym every day for months on end without completing the same workout twice. Most CrossFit facilities design workouts based on 25 to 30 movements, constantly changing up their variations, loads used, duration, and how they are grouped with other exercises, says exercise physiologist Dan Casey, C.S.C.S., a CrossFit coach at Windy City Strength & Conditioning in Chicago.

In CrossFit, the most regularly completed workouts are called “benchmark” workouts and typically pop up every three to six months, although that varies some with every facility, Kevin says. They are broken up into “the girls” and “the new girls,” which are named after women and “the heroes,” which are named after fallen military service members. Angie, for instance, involves completing 100 pullups, 100 pushups, 100 situps, and 100 squats for time. “Performing several of these benchmark workouts give you clear picture of how fit you are,” Berger says. “If there’s one thing you are not good at, we see that as a deficiency in your fitness and that’s what you then work on.”

“CrossFit is the antithesis of the ‘Globo Gym’ where people come in, put in ear buds, and nobody talks to anybody else,” Berger says. That’s one of the biggest differences between CrossFit facilities and just about any other gym or even group workout class out there right now. “CrossFit gyms have become a modern-day social club, a place where people can go, train, feel good about themselves, and meet other people who are interested in similar things,” Casey says.

This isn’t to say that every other form of exercise isn’t functional—tons of other exercises certainly are—but the primary goal of CrossFit workouts is to get you better at life. “We want to make people as prepared as they can be for regular life,” Berger says. “For some people, that’s above and beyond.” For instance, police officers, firefighters, and military personnel. Therefore, CrossFit focuses on exercises like squats, bench-presses, sprints, push-ups, and deadlifts that mimic your body’s natural movement patterns to help you catch the bus and get lids off of jars in a single twist.

Rather than being all about endurance or all about strong, explosive movements, CrossFit taps both your aerobic and anaerobic energy systems, Casey says. It does that by asking you to do two things: 1) complete as many reps of some exercises as you can in a certain amount of time and 2) complete as many reps of other exercises as you can until you cry “uncle.”

For instance, think about wall balls (squats with a medicine ball toss): If you try to complete as many of them as you can in a given amount of time, you are really going to get your heart pumping and your aerobic system working. Meanwhile, if you perform the same movement, but ignore time and just complete as many as you can in a slow and steady row, your whole body is going to shake.

Workout brands rarely take a stance on eating programs, but CrossFit and the Paleo diet love to mingle. The CrossFit website recommends people follow a Paleo diet (rich in lean meats, healthy fats, and produce, and excluding dairy, legumes, and grains). Plus, a lot of CrossFit gyms also host Paleo challenges in which you compete in different CrossFit workouts, but have points deducted if you eat anything that’s not Paleo. You don’t have to follow a Paleo diet to perform CrossFit by any means, but know that a lot of Paleo talk goes down in CrossFit gyms, Hughes says.

CrossFit is a workout hybrid unlike any other. That’s because it borrows movements and programming techniques from a ton of sports and training methods, says Wendy Hurd, P.T., Ph.D., C.S.C.S., a physical therapist with Mayo Clinic and CrossFit participant.

Weightlifting, gymnastics, calisthenics, and plyometrics, to name a few, she says. You even push sleds like football players do. “You become a well-rounded athlete, gaining experience in a variety of different sports, workouts, and training patterns,” she says.

CrossFit workouts are typically either done for max reps or for time, meaning that, pretty much whatever CrossFit workout you’re completing, it’s going to be high-intensity, according to Hughes. High-intensity training is critical to improving your cardiac capacity, increasing your anabolic threshold, building muscle mass, and making your workout the most effective it can be in as little amount of time as possible, says Stokes. “This isn’t getting on a treadmill for 40 minutes and watching TV.”

DEXTER JACKSON PLANS TO COMPETE IN THE 2020 OLYMPIA

How To Drop Another 5% Body Fat When You Are Already On 20%.

THE CORE WORKOUT FOR MAXIMUM RESULTS IN MINIMUM TIME