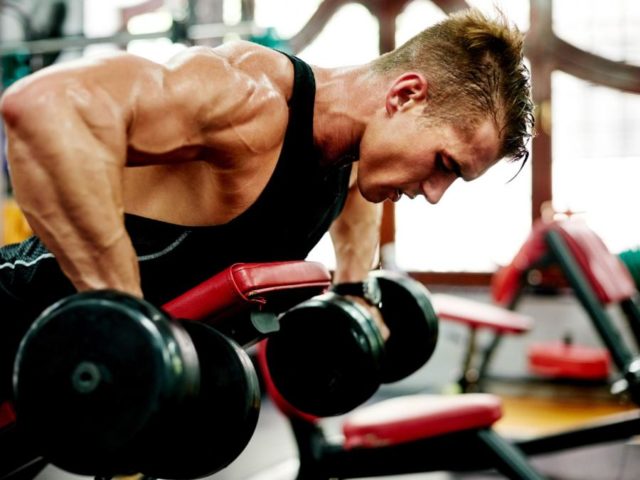 Rather than focusing strictly on gaining “X” pounds of muscle—which may or may not be doable in a given period of time—work on getting stronger. Increasing strength improves your body’s ability to recruit muscle fibers, particularly the ones that make the biggest difference in the way your physique looks. Training for strength also makes your goals more tangible and concrete. If you shoot to hit certain numbers on your lifts and then meet them, you’ll see your muscles respond along the way. Choose three exercises you want to see improvement on: one upper-body push (such as the bench press), one upper-body pull (like the chinup), and one lower-body exercise (try the deadlift). Then get to work.

Just as you want to be specific with your training goals and monitor your progress, you also want to keep track of your nutrition. Training hard won’t translate to new muscle unless you’re eating enough calories, and a food journal gives you an objective measure of how much you’re actually eating. It also lets you make adjustments easily if you’re not making the progress you’d hoped for. Write down everything that you eat and drink, along with the time of the day. If you’re not gaining weight, try to see where you can sneak in more calories to kickstart your progress.

Lifts that work muscle at more than one joint are known as compound exercises. These include the deadlift, squat, press, row, and pullups. Compound lifts recruit lots of muscle mass, making for efficient training and a big release of hormones such as testosterone that promote growth—make them the cornerstones of your workouts. There’s nothing wrong with throwing in some isolation work (curls, leg extensions), but treat them like dessert after you’ve had your main course of compound lifts.

Recovery is imperative for muscle growth, and there’s no better way to recover than by simply sleeping more. In a perfect world, you’d get eight to nine hour of sleep per night, but that’s not always realistic. You can, however, control when you go to bed, thereby giving you the best chance of getting as much sleep as you can. Record the TV shows that would otherwise keep you up and hit the hay.

5. Drink a shake during training

Pre- and post-workout nutrition receives a lot of attention, and rightfully so, because both are important. But if you’re looking to gain muscle, drinking a shake with protein and carbs during your workout is a great way to sneak in some extra calories without making a meal. Mid-workout nutrition will give you a quick shot of carbs and calories that can keep your energy up and help you train harder. You just need to be conservative with the amounts you consume so you don’t upset your stomach. Start with a modest shake of around 20g of protein and 40g of carbs.

Bodybuilding programs are typically split up to hit each individual body part once a week. That means you go a long time between workouts for a particular muscle group. If you can only lift weights three times per week, try switching to full-body workouts where you work the entire body in each session. This way, you’ll hit each muscle three times per week. Perform two to three sets per muscle group. If you’re training four days per week, try an upper/lower split where you’re hitting each muscle twice a week with about five sets each. Increasing the frequency with which you’re working each muscle will allow you to achieve strength and muscle gains more rapidly. The key is to keep the volume low to moderate to avoid overtraining.

Even if your goal is just to have a big chest and arms, you can’t forget about training legs. Firstly, muscle imbalances look bad, and secondly, heavy compound lower-body exercises like the deadlift have an enormous impact on your overall muscular development, even in your upper body. That’s because they recruit muscles everywhere—even in your shoulders and back—and they promote the release of hormones that build size and strength.

Just because you’re not training today doesn’t mean you shouldn’t eat big. Your off days are when most of your muscle growth takes place—the recovery phase—so it makes sense to keep plenty of nutrients on hand for the body to make the most of.

It’s fine—and probably prudent—to decrease your carb intake slightly on non-training days, as you don’t need the extra energy for training, but keep your protein high and make sure your overall caloric intake doesn’t drop by more than 500 calories.

Low-carb diets are wildly popular for losing body fat, but they’re the opposite of what you need to grow muscle. To get big, you can’t be afraid to gain a little fat, and as long as you’re eating clean food and enough calories to grow—but not too many—a little fat is all you’ll gain.

As a starting point, include carbs in your pre-workout meal and post-workout meal, as well as in the shake that you consume during workouts. From there, you can add or subtract carb meals based on how you’re progressing toward your goals.

Most people weigh themselves when they want to lose weight, but using a scale is a great tool for tracking muscle gains too. Weigh yourself once a week on the same day and time, preferably first thing in the morning, after you’ve used the bathroom and before you’ve eaten. If the scale isn’t moving up, you’re not gaining muscle. Plain and simple. Shoot to add about a half-pound per week to minimize fat gain and use the mirror to make sure the weight you’re gaining is solid muscle.

DOES EATING FRUIT MAKE YOU FAT?

What’s the difference between HIIT and Tabata?