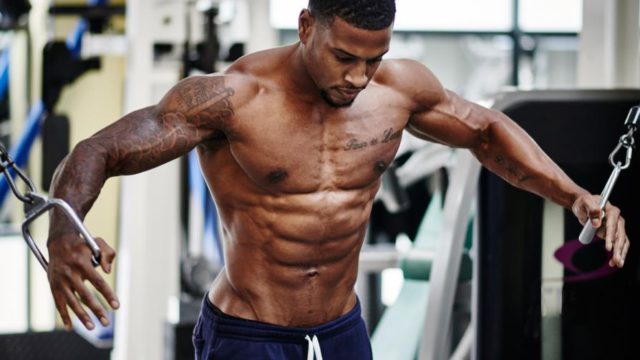 IT’S THE SAME old story at the gym: For months, you’ve seen the same group of guys doing bench presses—two, three, and sometimes four days a week (in which case, that’s probably all they do at the gym). And how do they look?

Exactly the same as when you first saw them.

They pyramid up in weight, starting with eight reps of 185, then six reps of 205, maybe three reps of 215, and then one rep of 225, which their buddies have to deadlift off their chests before it kills them. Every. Single. Week.

Sure, they look like they’re making progress. But they’re training with heart but not brains, and that’s why they plateau for years at a time—failing to increase their pressing strength and chest size. Hopefully, you’re not a member of the aforementioned group.

So if you’re looking for a way to add size to your chest, it’s time to adopt these key strategies.

Ask any old-school bodybuilder how to add two inches to your chest, and he’ll be happy to lead you through a routine of bench presses, inclines, flyes, and cable crossovers. But rows? “No,” he’ll tell you, “those are for Back Day.”

Well, no offense to your brofessor, but research has shown that a rowing movement is one of the best exercises you can include in a chest workout.

Although rowing exercises don’t tax your chest directly, they will promote strength and muscle mass on the rear side of the shoulder joints, thereby keeping your upper back and rear delts in balance with the pecs and front delts. It also prepares your entire shoulder girdle to lift heavier weights on pressing exercises.

For example: Your main bench press workout of the week should begin with one set of seated cable rows for just this purpose, allowing you to put up monstrous numbers on the bench presses that follow. Each time you stimulate your chest muscles, your body will be ready to use the heaviest weights the set calls for.

Old-fashioned chest workouts typically put lifters through a slew of exercises, commanding guys to perform an exhausting number of sets with the attitude that if you don’t feel sore for days afterward, you’d better do more next time. But there’s a better way.

Rather than spending hours trying to hammer a few muscles into submission, try hitting the chest as part of a workout while working other muscles along with it in the session. This allows you to train your entire body in less than an hour, and it releases a flood of the muscle-building hormones you need to bring on rapid gains.

In addition to building muscle faster, organizing your training this way increases your recovery time between sets and/or exercises. For example, you could do bench presses early on and then go to deadlifts, which are mainly a lower-body exercise.

Afterward, you’ll do dumbbell alternating presses—another chest exercise—and you’ll probably find you can use a heavier load than you anticipated. That’s because, at this point, it will have been long enough since you completed the bench presses that your chest will feel almost fresh again. And because you’re not blitzing your chest completely each session, you’ll be able to recover in time for your next one-and more frequent training means faster growth.

No, you don’t have to starve yourself to lose weight and live healthier