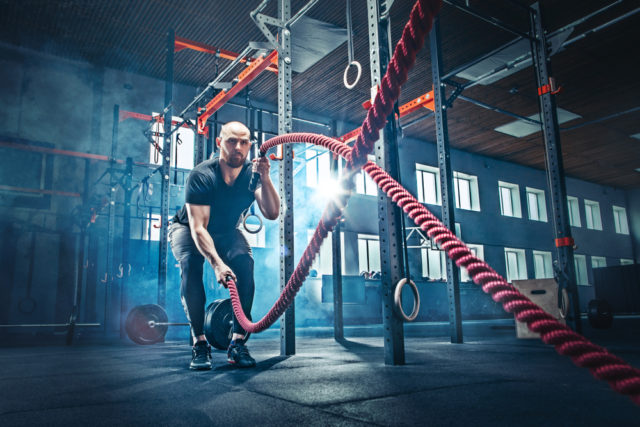 It doesn’t matter what type of training or dietary protocol you follow; none of them call for you to lard up. What you drink, how you train, and especially what you eat can all affect your ability to drop fat. We’ve compiled 25 proven tips that, when combined, can help you stay lean and mean through the winter. Remember, if you want abs, you have to start working toward that goal now.

Using sliders, or gliders, for body-weight exercises adds difficulty to the move and creates instability during each rep. This additional muscle recruitment allows you to torch more calories.

Excess post-exercise oxygen consumption refers to the increased metabolic rate you enjoy after a workout. Scientists at the Norwegian University of Sport and Physical Education analyzed multiple studies and found that training with heavier weights for fewer reps produces a greater rise in resting metabolic rate that’ll last longer compared to training with lighter weights for more reps. Don’t swear off high-rep training, but you should occasionally lift heavy (three to seven reps) to maximize the calories you burn when you’re not at the gym.

Despite this coming out of the home of Oktoberfest, German researchers have shown that drinking about 2 cups of cold water (not beer) can temporarily boost metabolic rate by roughly 30%. The effect appears to be mainly due to an increase in norepinephrine.

Not only will certain fats—particularly omega-3s—not lead to fat gain, but they can promote fat loss. Aim to keep your healthy-fat intake at about 30% of your total daily calories. Healthy fats include fatty fish such as salmon, sardines, and trout, as well as olive oil, peanut butter, and walnuts.

Researchers from the College of New Jersey discovered that when subjects rested 30 seconds between sets on the bench press, they burned greater than 50% more calories than when they rested three minutes. To maximize fat loss, rest less than a minute between sets.

Grapefruits, oranges, and other citrus fruit are high in vitamin C and fiber and can help prevent strokes and promote fat loss. A study from the Scripps Clinic in San Diego reported that subjects eating half a grapefruit or drinking 8 ounces of grapefruit juice three times a day, while otherwise eating normally, lost an average of four pounds in 12 weeks, with some test subjects losing more than 10 pounds without dieting. The researchers suggest the effect is likely due to grapefruit’s ability to reduce insulin levels. Try adding half a grapefruit to a few of your meals, including pre-workout.

A study done at Glasgow Caledonian University found that subjects who chewed gum between meals ate significantly less food at the second meal than those who didn’t chew gum. The researchers concluded that chewing gum increases satiety and therefore reduces food intake.

Soy protein is a proven fat burner. A 2008 review paper from the University of Alabama at Birmingham concluded that soy protein can possibly decrease appetite and calorie intake. The scientists also found that subjects who drank 20 grams of soy daily for three months lost a significant amount of fat.

Using free weights, especially in multi-joint moves such as squats, has been found to burn more calories than doing similar exercises on machines. Scientists said the difference may be due to the greater number of stabilizer muscles used when working out with free weights.

In one study, subjects who did three 10-minute bouts of running separated by 20-minute rest periods found the workout easier than when they ran at the same intensity for 30 minutes. The intermittent cardio even burned more fat and has also been shown to burn more calories post-workout than the same amount of continuous exercise.

Avocados are full of monounsaturated fat, which isn’t generally stored as body fat. They also contain mannoheptulose, a sugar that actually blunts insulin release and enhances calcium absorption. As mentioned earlier, keeping insulin low at most times of the day is critical for encouraging fat loss, and getting adequate calcium can also promote fat loss. Try adding a quarter of an avocado to salads and sandwiches.

A 2013 study in the American Journal of Clinical Nutrition showed that those who ate a high-protein breakfast (35g) felt more satiated for a longer period of time.

Go past failure when trying to get lean by using forced reps, static contractions, rest-pause, or dropsets. A study on collegiate football players found that using a high-intensity weight program—just one set per exercise for 6-10 reps to failure, plus forced reps and a static contraction for several seconds—caused more body-fat loss in 10 weeks than a lower-intensity program consisting of three sets of 6-10 reps per exercise taken just to muscle failure. This could be due to a greater spike in growth hormone (GH) in the high-intensity group: In a study from Finland, forced reps boosted GH three times higher than training to failure.

While lifting heavy does burn more calories post-workout (see No. 2), performing higher reps burns more calories during the workout, College of New Jersey researchers reported at a 2007 annual meeting of the National Strength and Conditioning Association. Be sure to mix up your training by using lighter weight and higher reps (10-20) during some workouts and heavy weight and low reps (three to seven) in others. Another way to get the best of both worlds is to perform four sets of most exercises, doing your first two sets with heavy weight and low reps and the last two with light weight and high reps.

Consider using less water when whipping up a protein shake to curb hunger when dieting. In a study from Purdue University, subjects drank two shakes that were identical in nutritional content and reported a greater prolonged reduction in hunger after drinking the thicker shake.

Dairy products are rich in calcium, which can help spur fat loss. This may be because calcium regulates the hormone calcitriol, which causes the body to produce fat and inhibit fat burning. When calcium levels are adequate, calcitriol and fat production are suppressed while fat burning is enhanced. Adding lower-fat versions of cottage cheese and yogurt (Greek, plain, or skyr) to your diet are great ways to boost protein intake and aid fat loss.

Capsaicin, an active ingredient found in hot peppers, is a chemical that has been shown to promote calorie burning and reduce hunger. Its effects are enhanced when used with caffeine, and research also shows that it boosts fat oxidation during exercise. Try adding crushed red pepper, hot peppers, or hot sauce to your meals. If you can’t stand the heat, try a capsaicin supplement.

One study in the American Journal of Epidemiology reported that subjects who slept five hours or less per night were one-third more likely to gain 30-plus pounds over the 16-year study than those who slept seven hours or longer per night. This may be due to an imbalance in the hormones leptin and ghrelin: While leptin decreases hunger and increases the metabolic rate, ghrelin boosts hunger. A study by University of Chicago researchers found that men who were sleep-deprived for two days experienced a rise in ghrelin levels and a drop in leptin levels, along with a concomitant rise in hunger. A Stanford University study showed that subjects who slept the least had lower levels of leptin and higher levels of ghrelin and body fat compared with those who slept eight hours. Try to get seven to nine hours of sleep every night to not only enhance your recovery but also improve your health and help you keep fat away.

Apple polyphenols are compounds found in apples that have been found to boost muscle strength, endurance, and even fat loss. While they appear to directly increase the activity of genes that decrease fat production and storage, the boost in endurance and strength can help further fat loss by allowing you to train harder longer. A typical large apple provides about 200mg of polyphenols.

22. Feel the Need for Speed

Lift weight explosively, say researchers from Ball State University. They believe that because fast-twitch muscle fibers are less energy-efficient than their slow-twitch counterparts, they burn more fuel during exercise. To perform fast reps in your workouts, choose a weight equal to 30-60% of your one-rep max for each exercise. Perform two sets with three to eight fast reps, then follow with two to three sets of normal-paced reps.

A study from Italy found that subjects who rock-climbed had an average heart rate of about 80% of their max, which equates to an intense cardio session. Subjects also burned about 12 calories per minute (based on a 180-pound guy) or just less than 400 calories in 30 minutes. Check out indoor or outdoor rock-climbing clubs in your area.

Turns out that meat and dairy products from grass-fed cows are worth the extra bucks. U.K. scientists found that organic milk had about 70% more omega-3 fatty acids than conventional milk, and a study published in the Journal of Dairy Science found that grass-fed cows produced milk containing 500% more conjugated linoleic acid (CLA) than cows that ate grain. Meat from organically raised cattle also contains higher levels of CLA and omega-3s, both of which can help you burn more fat and build muscle.