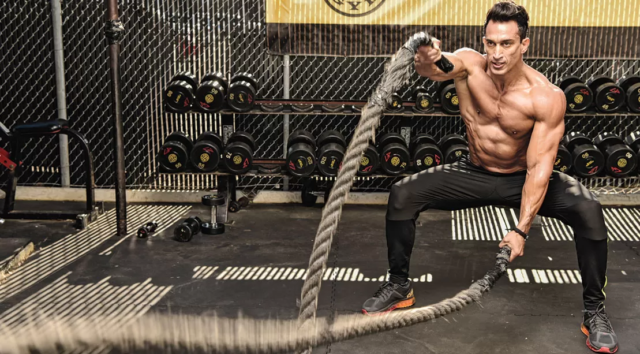 Two reasons the treadmill became and has remained such a popular machine at the gym is because it’s easy to use and convenient to access. But whether you loathe running in place on a conveyor belt or are simply on the lookout for new cardio workouts, these upper-body sessions will fill that void.

The above examples of M&F’s previously prescribed walking and running cardio sets are insular and exclusionary. That said, just because none of those examples are exciting doesn’t mean lower-body-focused cardio activities don’t have value. They target your body’s largest muscle groups (read: glutes, hamstrings, quads), which generally gives you more bang for your buck in the calories-per-minute department. But to ignore the positive effects of upper-body cardio is to ignore emerging science on the effectiveness of it.

There are a multitude of cool tools to use at the gym these days—including tires, sledgehammers, battling ropes, and heavy bags—and many of them are ideally suited for increasing your body’s ability to torch belly goo. Hell, even a set of light dumbbells, put to good use, can set your metabolism (as well as your muscles) afire.

Translation: There’s no need to run when you can slam ropes and get a crazy pump in the process.

So we encourage you to skip your previously scheduled treadmill sesh and instead try any (or all) of the following routines to continue chiseling a lean, mean, show-stopping physique.

For rope slams, the Tabata protocol is a strong option. These eight, all-out bouts of rope tussling will allow you to churn out more cumulative work at a high level of intensity, providing a higher metabolic payout. Pick at least two types of rope slams—two-handed slams and alternating waves are solid choices to start with—and go as hard as you possibly can for each work period.

Keep your core tight and make short, choppy movements with your arms so that the rope creates a wavelike appearance.

Justin Fortune has trained world champion boxers like Manny Pacquiao and actors like Frank Grillo and always with a common training denominator: body-boiling intensity. One of his go-to exercises for developing upper-body stamina and carving out deltoids in his clients is a shoulder-beatdown protocol known as Fortune raises.

Set a timer for three minutes. Every 30 seconds, alternate between straight punches and dumbbell raise variations (front, lateral, and rear). Use three- to five-pound dumbbells and rest a minute between rounds.

If you have access to a tire and a sledgehammer, you have all the tools you need for an upper-body-focused workout that will torch your lats, delts, traps, and abs, along with a boatload of calories. Also, doing planks instead of resting will only help expedite the calorie burn. (Note: Swing the hammer from overhead straight into the tire. Just be careful that it does not rebound and hit you in the face.) Perform the below as a superset.

We Asked 20 Women: What do you think about when you’re having sex?