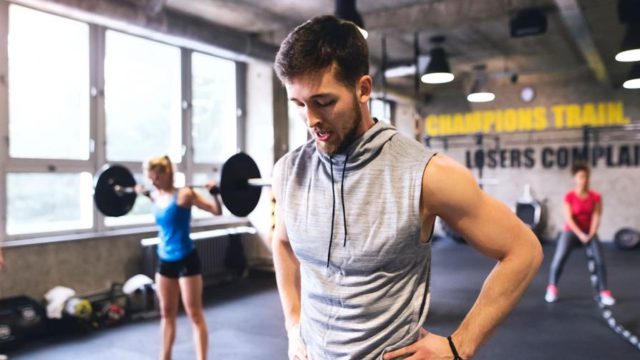 YOU LOVE YOUR rest periods. Sometimes they’re the best part of a workout—those brief respites between sets of a hard lift that allow you to catch your breath, get a drink, and scroll through your Instagram feed.

But while resting is an essential part of anaerobic exercise (like weight training), that doesn’t mean you should sit like a lump the entire time. There are several strategies you can use between sets that will help you get bigger, stronger, and leaner.

Start using them now, and make your rest periods work for you!

Whatever muscles you’re training, try stretching their antagonists—the muscles that oppose them—between sets. For example, if you’re working your back, which is all pulling muscles, you’ll stretch out your chest, which is used to push. Other complementary muscle groups: shoulders and back, thighs and hamstrings, and biceps and triceps.

In a study published last May in Research in Sports Medicine, two groups of subjects were tasked with performing three sets of seated rows (which primarily work the lats), with two-minute rests between sets. While resting, one group did nothing, while the other group had their pecs stretched by a researcher for 40 seconds. Result: Not only did the subjects who stretched not lose reps to fatigue in each succeeding set, they actually got more reps than those who hadn’t stretched. Researchers also measured significant increases in muscle activity in the subjects’ lats and biceps.

It’s not clear exactly why stretching is helpful or if actively stretching on your own will have the same effect, but Sherrington’s law, a physiology principle, states that when a muscle is stimulated, its antagonist is forced to relax—so it’s possible that stretching one set of muscles forces greater relaxation, and therefore recovery, in its antagonists, leaving them fresher for subsequent sets.

Squeeze in some cardio

Whether you’re training to lose fat or build endurance, you can burn more calories in your workout by doing some light cardiovascular exercise between sets. This could be anything from simple jumping jacks to jumping rope, kettlebell swings, or a sprint on an Airdyne bike. Interset cardio “keeps your heart rate elevated without hindering your weight training goals,” says L.A. trainer Kate Vidulich, owner of fatlossaccelerators.com. But ease into it if you’re not in very good shape to begin with.

“Do 30 to 45 seconds of cardio, then give yourself at least 30 seconds of pure rest,” says Vidulich. And be sure the exercise you choose doesn’t compete with the lift you’re performing. In other words, don’t do bike sprints between sets of squats, or you’ll see your leg strength drop off rapidly.

Sometimes sitting down to rest between sets is not only OK but advisable, such as when you’re about to perform an extremely heavy lift. Your nervous system has to gear up for the effort as much as your heart and your muscles.

But even then you can still be active with your recovery. “Take a deep inhale, then make sure your exhale is slow and deliberate and takes twice as long,” says strength coach Jim Smith, C.S.C.S., co-author of Strength: Barbell Training Essentials. “It slows down your heart rate and restores normal breathing.”

Below are the approximate recommendations for rest times (complete rest, that is) between sets according to your goal, per the National Strength and Conditioning Association (NSCA).

* Note that since fat loss depends primarily on diet, there is no official rest-period prescription for it, although we feel that both short and long rests work, depending on the program.

Why do some women orgasm more often than others?

If you’re young, single, and home for the holidays there’s a 60% chance you’ll...

Curcumin may boost brain power, lessen the effects of depression