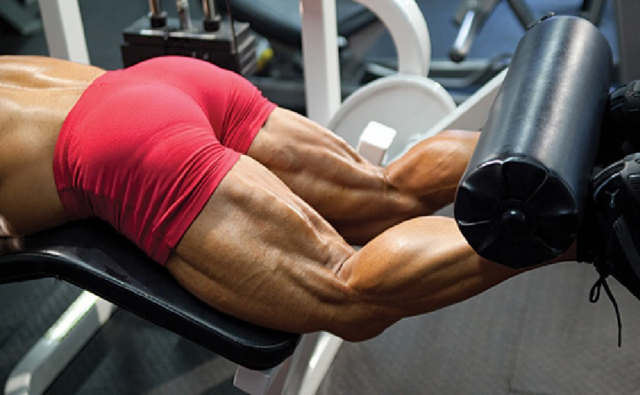 For some reason, hamstrings tend to get the short end of the stick when talking about leg strength and developing leg size. Not surprisingly, people tend to always “think quads” when it comes to the true source of power and size for impressive wheels — until they turn around and notice their posterior chain is flatter than 6-month-old Pepsi.

The truth is, hamstrings are like the triceps of the legs. Their development is the key to true leg size, and their strength translates to plenty of other strong moves in the gym. It goes beyond just jumping on the hamstring curl machine and going to town. Here are the moves that deliver the most bang for their buck.
MOVE NO. 1: ROMANIAN DEADLIFTS

RDLs torch the hamstrings in the most athletic way possible, as a hip extensor and contributor to a properly functioning posterior chain. I generally keep reps between six and eight when doing this exercise, try going heavier rather than lighter.

The reason many sprinters injure themselves is because of their hamstrings’ poor ability to decelerate the lower leg to stop it from extending. Exercises that focus on the eccentric strength of the hamstrings are a crucial strength tool. The best news is that you can achieve this using bodyweight only. Assume a tall kneeling position, with your heels secured under anything immovable. Without bending forward at the waist, contract your hamstrings and dig in hard with your heels as you slowly let your body descend toward the floor for a 5-8 second negative rep. You should land gently on the ground in a push up position. At this point, push yourself back up to the start position using your hands to help, and repeat. Focus on no more than 6 reps.

Hip thrusts are the best way to get a heavy hip without large amounts of stress on the lower back. These can be a saving grace while you’re recovering from an injury. Sure, primarily they’re meant to target the glutes, but the hamstrings’ contribution is just as important to making the lift successful.

This sounds like a shocker, but properly executed box squats can recruit a ton of hamstring tissue. For this particular purpose, they beat squatting to full depth because there’s less quad involvement due to lower-knee flexion and greater hip flexion. What matters most is that you come to a full stop on the box while staying tight. The second you let go of your tension through your lower and upper back, this becomes an unsafe movement. Remember to use a slightly wider, toes-out stance when squatting this way too. This will ensure that your shins stay more vertical to shift the emphasis away from your quads.