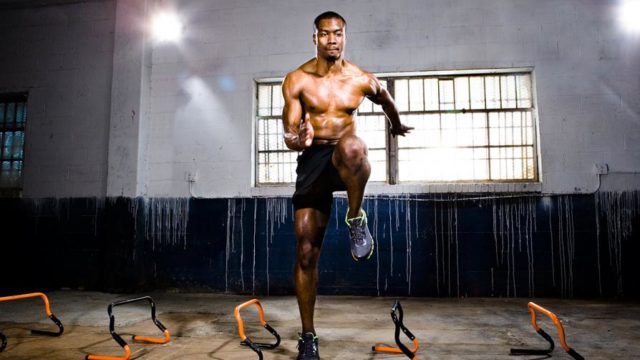 AGILITY ULTIMATELY sets apart the great athletes from the average ones. Watch Steph Curry or Devin Hester break ankles on their way to epic scores, and it’s obvious: They’re not the biggest guys in the game, but they move so fast and so fluidly that they’re almost impossible to defend.

Agility is defined as an athlete’s ability to accelerate in a target direction as fast as possible, decelerate in that same direction, plant, and reposition body mass appropriately to effectively reaccelerate in a new direction—all within a matter of seconds. If an athlete can’t do that, they’re not only at a distinct disadvantage but also more likely to be injured.

The good news: While you might not have agility like Curry or Hester, you can always train yourself to get a little bit closer to that level.

That’s where the following five workouts come in. They’re built on classic exercises used by countless athletes to master agility training. Whether you’re an avid weekend warrior or just want to step up your game, these agility workouts can give you some fresh new training ideas to help you stay more engaged with your current routine, and ignite new development that can not only complement but also improve your performance. (And be sure to check out the five essential training rules for agility training that every athlete should know.)

Scroll through the list below to find each workout, plus a warmup phase, which will ensure you’re ready to perform at the highest level possible with the training that follows.

Travis Hansen, C.P.T., is the director of the Reno Speed School at the South Reno Athletic Club, and was recently named the leading authority on speed training for the International Sports Sciences Association.

Phase #3: Muscle activation techniques:
a. Front- and side-plank: 1 x 10 sec. each
b. Glute bridges: 1 x 10 reps
c. Quadruped / bird dogs: 1 x 5 reps per leg
On your hands and knees, extend your right leg behind you and your left arm in front of you. Return to start. Then extend your right arm and your left leg behind you. That’s one rep.
d. Clamshells: 1 x 10 sec isometric hold
Lie down on your side with your knees bent slightly. Wrap an elastic band around your knees and slowly open and close your legs.

Phase #4: Explosive plyometrics:
a. Lateral anklings: 2–3 sets x 10 yards each direction; 30 sec rest
Perform a series of stutter steps as quickly as you can for 5-10 yards. Keep your feet as low to the ground during each step as possible.
b. Lateral barrier jumps: 2–3 sets x 10 sec; 30 sec rest
Use a 12-18″ tall barrier or low hurdle. Jump back and forth sideways over the barrier. Focus on landing lightly on the balls of your feet.

A. Box drill: 2–3 sets x 4 reps; rest 1–2 min between sets
Set up 4 cones 5 yards apart in a square. Start at the bottom right cone. Sprint to top right, shuffle to top left, backpedal to bottom left, and turn and sprint to where you started for the finish.

B. Shuffle, shuffle, sprint: 2–3 sets x 2 reps on each side; rest 1–2 min between sets
Pick a starting location. Side-shuffle rapidly for 5 yards, then turn and sprint for 10 yards.

A. Slideboard or lateral speed shuffles: 5–8 sets x 20-30 seconds; rest 1–2 min between sets
Set up 2 cones 5 yards apart, and shuffle back and forth toward each cone as fast as you can.

A. T-Drill: 2–3 sets x 4 reps per direction; rest 1-2 min between sets
Set up a cone series in the form of a T. Start at the bottom, sprint to the top, shuffle to right side of T, then shuffle to the left, then back to center, and then backpedal to the start. That’s one rep.

A. Swing plants: 2-3 sets x 8 reps per direction; rest 1-2 minutes between sets
In this drill, you’ll make two quick turns to simulate rapidly turning around. Sprint 5 yards, then turn your body and right leg 90° to the right. Plant your right leg, and then swing your left leg across your body another 90°, plant your left leg, and rotate again so both feet are set. You should now be facing the direction you came. That’s one rep. Repeat to the other side.

B. Swing plant shuttle run: 2-3 sets x 4 reps per direction; rest 1-2 minutes between sets
Do a swing plant rep. Once you’ve turned around, sprint 10 yards and do another swing plant (turn the opposite direction), and then sprint back the other direction for 5 yards.