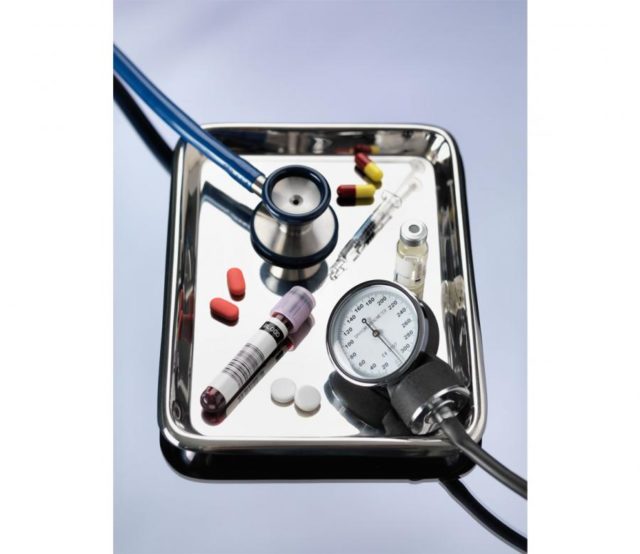 WE’VE ALL HAD mornings where our mugs look a little bit off—call them bad-face days—because we didn’t sleep enough, caught a bug, or partied too hard. But if you consistently notice any of these five physical changes, it may not be a temporary problem.

We asked top dermatologists to decipher when subtle shifts are perfectly normal, and when they may be a sign you should see a doctor.

The common explanation: You really can blame your parents for this one: Male pattern baldness is caused by your genes and sex hormones. It happens when the hair follicle shrinks over time, resulting in shorter and finer strands—and then no hair at all.

The bigger problem: In a new study from the University of Copenhagen, researchers found that men with receding hairlines had a 57 percent increased risk for heart attack and a 39 percent increased risk for heart disease. Earlobe creases and fatty deposits around the eye were other tell-tale risk indicators. If your hairline creeps, talk to your doctor about strategies to maintain good heart health, like exercising regularly, not smoking, and avoiding saturated fats.

The common explanation: Raccoon eyes are often caused by thinning under-eye skin, which is mainly due to the collagen loss that naturally happens as we age. They’re also genetic, and can be more pronounced in people with olive or dark skin. Oh, and if you’re chronically short on sleep, expect to see them too.

The bigger problem: Dark circles may be a sign of nasal congestion or undiagnosed allergies, which make your blood vessels more prominent, says Alastair Carruthers, MD, a clinical professor in the department of dermatology at the University of British Columbia in Vancouver. Allergies can emerge at any stage of your life, so ask your doctor or an allergist to run tests. Treating the condition with antihistamines may help reduce their dark appearance.

The common explanation: Some people naturally redden with shyness, alcohol consumption, or stress. And, of course, flaming skin is also a result of unprotected sun exposure—which is a common problem for guys who earn their living outdoors.

The bigger problem: If the long term redness isn’t caused by one of the above—and it doesn’t go away—you may have rosacea, a chronic skin condition that happens when the blood vessels on the face dilate and increase blood flow near the surface of the skin, making it appear red and flushed, similar to when you’ve had a bit too much to drink. Rosacea is harmless—although it can make you feel self-conscious—and it’s not usually caused by an underlying medical condition. It’s typically treated with antibiotics, but there is no cure.

The common explanation: Zits happen when your body produces excess oil and dead skin cells—together they form a soft plug blocking hair follicles and creating a landscape where bacteria can thrive.

The bigger problem: “Sometimes in men who work out a lot, they’ll have acne eruptions on their backs as a result of the supplements, proteins or anabolic steroids they’re taking to build muscle mass,” says Peredo. Plus, taking a potent cocktail of supplements and steroids could be messing with your body’s chemistry in other ways, causing mood swings, aggression, irritability, or even insomnia. She suggests taking a break from your supplement routine to see if it improves your skin (and your mood). Antibiotics or a topical treatment can help resolve the problem.

The common explanation: Some people are naturally prone to moles, but sunspots are small brown patches caused by a lifetime of overexposure to the sun’s ultraviolet rays. Both are usually harmless, and they can be safely removed with lasers.

The bigger problem: The moles and dark patches to watch out for are the ones that creep up suddenly, have a dark color, irregular border, or are larger than a pencil eraser. “If you have a mole that appears or one that has changed, it’s a good idea to see a dermatologist,” says Marina Peredo, M.D., board certified dermatologist in Smithtown, New York.

More than 3.5 million cases of skin cancer are diagnosed annually, and moles and spots are often the first physical signs you have the disease. (To find free skin cancer screenings in your area, visit the American Academy of Dermatology’s web site at aad.org.)

The new rules of recovery

THE VEGETARIAN BURGER TO KILL YOUR CRAVINGS

THE HEAT WAVE WORKOUT: HOW TO TRAIN IN HOT WEATHER