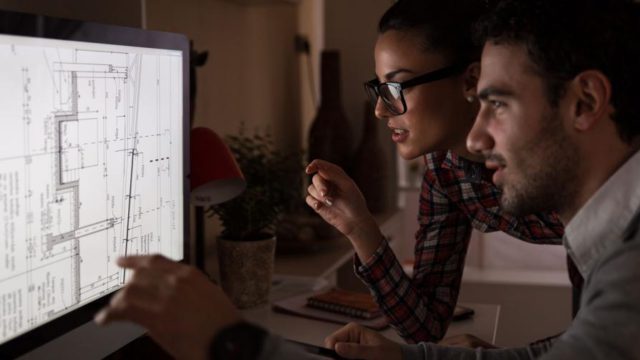 SO YOU’VE MADE eyes a few times over the copy machine. Then a few more times at the water cooler. And then there was that one time you both started talking at the office happy hour, and one drink turned into four, and you both felt a little more giggly than you usually do with, say, Grumpy Bob from accounting.

And now you’re thinking: Could we make an office relationship work?

Here’s the thing: An office romance is a risk with no guarantees, says New York-based relationship expert and psychologist Michele Barton, Ph.D. The thrill of ushering out for elevator makeout sessions and lunch dates starts hot, but it can soon fizzle—and suddenly you’re playing a metaphorical game of minesweeper, tip-toeing over trip wires until one of them ignites a Human Resources bomb of doomsday proportions.

That’s why we—and just about everyone else—will sanely recommend you avoid getting involved with a colleague. But you probably won’t listen to us—after all, 39% of Americans have dated a co-worker, according to a survey from CareerBuilder. But if you really want to shack up with your cubemate anyway, read our tips on how to navigate an in-office romance without getting fired or obliterating your amicable work environment.

It’s tempting to keep your budding romance as quiet as possible, especially if there are complicating variables, like a difference in hierarchy. But don’t keep it a secret from everyone, Barton says. Have a chat with HR sooner rather than later. “The more closely you follow protocol from the start, the less likely it is that problems will emerge,” she says.

Speaking of which: It’s probably a good idea to familiarize yourself with your company’s inter-office dating policy ASAP. Almost half—45%—of employees have no idea whether their company even has a dating policy, according to that 2016 CareerBuilder survey we mentioned.

Following protocol doesn’t mean you need to send an office-wide memo about your sex life. But cover your ass. Nobody’s as secretive as they think they are, so it’ll probably (definitely) come out. Do your best not to fan the flames.

Why do you want to be with this person? Is it just that flirtatious, endorphin-flooded, you-haven’t-had-sex-in-nine-months-fueled attraction tempting you to throw away your job or risk having your employers think less of you? Or is this a situation where you’ve worked together for about a year, you find yourself not only attracted but wholly connected to your co-worker, and you see this being a serious long-term relationship? If the heat dissipates after a few months of harmless office flirtations, drop it. If it only gets stronger, have that chat with HR.

Also, make sure your lover feels the same way. Not to say you’re delusional, but if this professional relationship is not in any way, shape, or form becoming romantic, you need to pump the brakes. If you both have feelings and want to pursue this, then get on the same page, discuss the risks, and create a game plan.

If it’s not someone in a different department or location, you should at least try to avoid the classic taboos—your immediate supervisor, or your direct subordinate. Some companies straight-up ban these types of relationships, while others just watch them closely to make sure there’s no favoritism.

The important thing to remember is that this might not just be a matter of losing your job, Barton says. There’s the obvious issue of a potential sexual harassment suit, as well as varying ethical standards for different professions. “Psychologists are prohibited from relationships with anyone for whom they have an evaluative influence, so in something like therapy it’s important to have clear boundaries or you could lose your license,” Barton explains. “In other words, it had really better be worth it.”

If the relationship flounders, you’ll have to consider how difficult everyday work life will be—walking past your former paramour’s desk to go to the kitchen. Your meetings and collaborative projects could be ungodly awkward. If your ex is in a higher place of power, what if they flex some muscle to get you laid off? “Going to work after a breakup is hard enough—do you really want to deal with a failed romance staring you in the face every day as well?” Barton says.

One more thing to consider: Whether this lover makes a habit of cozying up to co-workers. Are you their first, or is this person notorious for previous office flings? Of course, it doesn’t necessarily mean anything sinister if they are—maybe they’re a workaholic who doesn’t have time to meet people outside the office. But this should still weigh heavily into your decision, Barton says, because you could find yourself in a position that’s awkward for everyone involved if they end up dating someone with whom you work closely, like your manager.

If you do decide to engage in an office relationship, “try to keep things as compartmentalized as possible,” Barton says. “Having clear, defined boundaries is important in any relationship, especially in the early stages, and especially if you work together.”

For example, wait until you’re off the clock and out of the office before making any moves. “The best way to initiate is during a group activity outside the office, such as a happy hour,” Barton says. “If no group activities come up, try talking to them about a common interest, then suggest continuing the conversation over coffee or lunch.” Company dinners and parties are fair game as long as they’re identified as leisure activities, but if clients are involved or if there are people who don’t work directly with you, it’s best to err on the side of professionalism, Barton says.

“The goal is to keep your job and get the relationship, not to lose both,” Barton says. “So keep both in mind.”

If they’re picking up what you’re putting down and you’ve gone on a few dates, then initiate a conversation to discuss the state of your relationship. We’re not suggesting you go from hooking up to serious relationship status in 60 seconds flat, but more communication is always better if you work together.

“It’s very helpful in the early stages of a relationship to discuss situations that might be difficult to navigate in advance,” Barton says. “Things won’t always turn out exactly as planned, but you need to be on the same page.”

Bottom line, no matter what you decide: be a professional. If you date, and your office (or select people from your team) knows, make sure everything stays businesslike. Don’t elope on two-hour lunch breaks. Don’t spend half your day standing at her desk or office. Keep the PDA to a minimum—actually, best not to have any PDA.

“I tell my clients there’s an inverse relationship between logic and arousal,” Barton says. “The more aroused you are, the less likely you are to be focused on work and things that require brain power.” The last thing you want is for your colleagues to think you’re not pulling your weight because you’re distracted (especially if that distraction is a colleague).

How To Prevent Stretchmarks From Weightlifting And Bodybuilding.

After Fighting Down Skin Cancer, Hugh Jackman Is Reminding You To Wear Sunscreen.