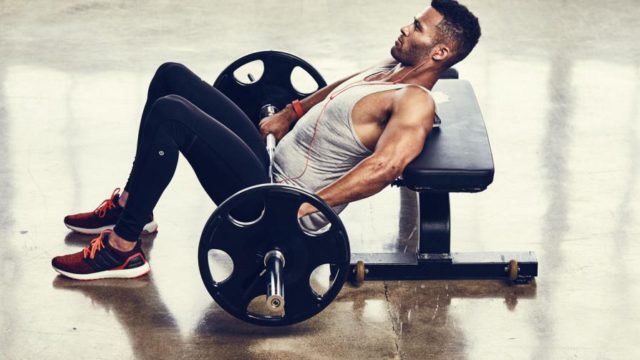 IF YOU’VE SPENT time on tough workouts, we’re betting you’ve experienced the phenomenon known as delayed onset muscle soreness (DOMS), aka muscle fever. You know the deal: You’re feel like a beast, so you hit the gym hard or go extra-long on your last run or ride—but after about 24 hours, just putting on your shirt or going down stairs has you grimacing with soreness and stiffness.

But while plenty of guys have contended with delayed onset muscle soreness, it’s still something of a mystery. “The jury’s still out as to exactly why it happens,” says Lance Dalleck, Ph.D., assistant professor of exercise science at Western State Colorado University. “But the leading candidate is that excessive eccentric contraction causes muscle damage, inflammation, and stress that trigger the pain receptors.” Eccentric muscle action refers to movements that have you releasing load, such as the lowering portion of a bench press, the release portion of a row, the action of starting and stopping a lot (such as in intervals), or even a lot of running downhill. “Most people who’ve done some activity will know after what workouts they can expect it,” Dalleck says.

Delayed onset muscle soreness isn’t necessarily as bad as it sounds, or even an indication that you totally overdid it (with some exceptions.) Rather, “it’s a sign that your body is on the move to improvements in strength,” says Michele Olson, Ph.D., professor at Auburn University Montgomery. “You overloaded the muscles, which is important for your body to adapt upwards and get fitter and stronger.”

That said, muscle fever really doesn’t feel so hot (at least figuratively.) Here’s what you can do to bring it down.

First and foremost, you shouldn’t go hard again the next day or even the day after. Mostly because you probably physically can’t—the damage you’ve caused will inhibit performance until it heals. Still, if you’re not totally debilitated, some exercise can help to get the blood pumping to the affected muscles, bringing oxygen and nutrients and flushing out any buildup of post-exercise waste products. Just go easy: Walk, don’t run, or do lighter weights with fewer reps and sets. Cross-training is also an option, but again, don’t do it aggressively. It can take a week to fully recover, and that might be how long your body needs before you hit it hard again.

Gentle stretching, such as an easy yoga class or some slow holding stretches may also help, but only if they don’t cause more pain than you’re already feeling. “I’d stay away from dynamic or aggressive stretching, and go carefully,” says Dalleck. Light foam rolling or even getting a massage may also be beneficial as both can increase blood flow to affected areas, but again only if they don’t increase the discomfort.

“There’s been a lot of recent research on nutritional interventions to aid recovery,” Dalleck says. Antioxidants, such as those in pomegranates, cherries, and blueberries, and caffeine have been shown to help reduce inflammation and decrease recovery time. It’s not clear the dosage needed, but Dalleck says that taking in a bottle of antioxidant-rich juice or perhaps a cup of coffee, before or after your workout, may help. As an ultrarunner, he personally ups his antioxidant consumption for the week prior to racing (call it berry-loading?), and keeps it elevated for the week after.

What may be less important, according to recent research, are your electrolyte levels. So as long as you keep up your usual consumption of potassium-, magnesium-, calcium– and sodium-containing foods, you should be good there at least as far as muscle fever is concerned.

Sometimes this fever needs a pill, too. Anti-inflammatory drugs such as ibuprofen can be a godsend to muscles that have been to hell and back, but the key is to take one pill (or maybe two). Don’t overdo the doses and pay attention to how you feel when the meds wear off. “Sometimes masking the pain can lead to worse injuries,” Dalleck says. “The symptom of pain can be a signal to our body to use caution.”

If the pain’s not getting better and has lasted a week or more, or if it’s localized to one area or side of your body and your workout was symmetrical (as in, you used your left and right side muscles equally), the pain you’re feeling could be a sign of injury. “In some unusual cases, the damage is so profound that it distresses your body into a condition called rhabdomyolysis,” Olsen says, in which the body’s muscles break down to such an extent that their cells flood in the bloodstream and can lead to kidney failure.

Sorry, but drinking booze every day might increase your cancer risk

HOW TO CHOOSE THE RIGHT VITAMINS

The Unique Health Benefits Of These Nuts.