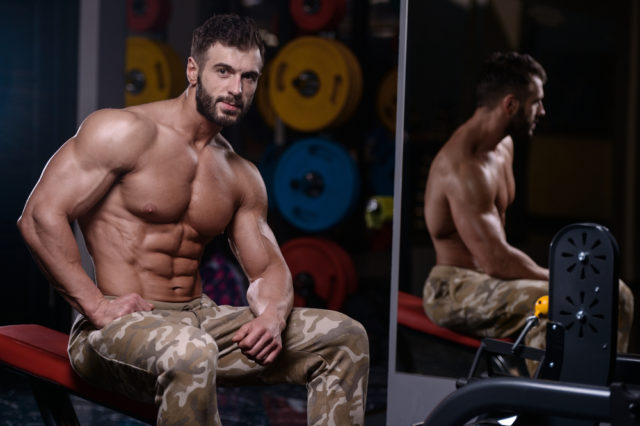 If there is one muscle group that can truly set you apart from the rest of the pack it is the shoulders. Why do I say that? Well, because the delts live in three-dimensions, with heads in the front, sides and back. Onlookers can see just how developed your shoulders are no matter where around you they are standing. In addition, big, thick, and wide delts are not only noticeable when in a tank top or topless, but also when wearing a dress shirt, sweater and even a suit. In other words, no other muscle screams, “I lift hard and heavy” like the shoulders do.

Make sure you are avoiding the following mistakes if you want your delts to stand out in a crowd.

Because the delts are made up of three heads – anterior, lateral, posterior- utilizing a variety of lateral raises is very effective for building both massive and proportionate shoulders. However, laterals are one of the most “abused” exercises in gyms throughout the globe simply because trainees do them incorrectly. Flaws include using too heavy a weight to achieve full range of motion; swinging the DB’s up rather than using muscular power; and not keeping the hands flat to the floor to properly “isolate” the targeted head. In short, make sure your form on all laterals is strict, complete and performed with precision.

Although presses overhead most strongly activate the anterior (front) deltoid head, they are still the best exercises for manifesting overall muscle mass in the shoulders. I don’t know too many “delt-monsters” out there who do not include at least one form of pressing in every shoulder workout. However, like laterals, overhead pressing exercises are also performed incorrectly much of the time. In an effort to use more weight, many trainees use a very short range of motion, only bringing the bar about halfway down before pushing back to the top. Now while this might look cool, the only thing these people are accomplishing is working more triceps than delts. Another common error is leaning back (often again to be able to use bigger weights) during presses, which shifts much of the emphasis off the delts and onto the clavicular pecs. So, sit upright and always use a full range of motion!

I think that one of the reasons most top bodybuilders today show much more impressive shoulder development than from eras past is because of the incredible variety of new equipment we are so lucky to have at our disposal. While barbells and DB’s remain the cornerstone of any intelligent mass-building program, I find that the delts react quite well to the various angles and planes of motion that machines and cables offer. Too many people get stuck using the same basic exercises over and over, even when they are no longer progressing. If you want to break plateaus and continue to grow make sure you explore all your gym has to offer for shoulder training.

Developing a truly exceptional pair of cannonball delts is no easy task. I think we often see far more impressive chests and arms than shoulders out there in the land of iron. In fact, up until a few years back I myself realized my delts were not nearly as developed in relation to my pecs, and this was making my overall “aesthetics” suffer.

At this point I altered my plan of attack and began to utilize all sorts of “intensity techniques” to increase TUT (time under tension) and the amount of punishment I was dealing to my delts. Every shoulder workout included a variety of one or more of the following growth tactics: Supersets, Tri-sets, Rest Pause, Eccentric emphasis, Pre-Exhaustion, Post Activation, 1 and ½ reps, etc.

It did not take long for my shoulders to “submit,” and now they match my chest and arms better than ever before. Always remember – “Muscles do not grow when you whisper at them. Most often you have to SCREAM!”

Although working the muscles of the rotator cuffs will not directly contribute to the visual appearance of the shoulders, this mistake is still just as important as any other listed above! I will make it rather simple for you – if you fail to properly warm up your shoulders by using various internal/external rotation movements, eventually you will experience severe shoulder joint pain (or worse), and thus will be unable to effectively build huge delts. Take some time to work those rotators, and in turn, your shoulders will remain pain-free and ready for battle.

5 THINGS TO KNOW ABOUT ZINC