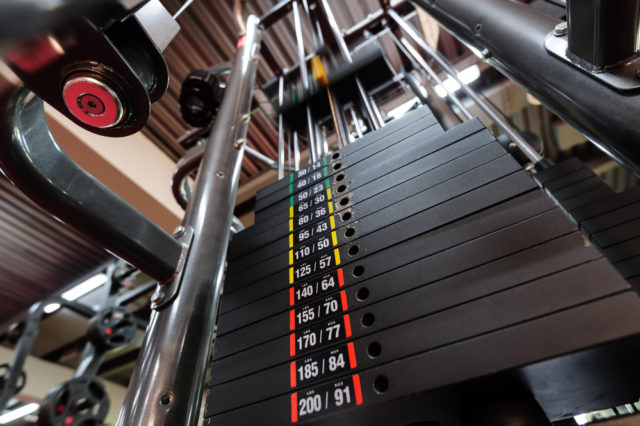 Ever since various types (and makes) of resistance machines began filling gyms a few decades ago, a debate amongst athletes, bodybuilders, trainers, coaches, and scientists arose rather quickly about which is superior when it comes to stimulating muscular hypertrophy free weights or the aforementioned machines? While there are certainly excellent arguments for both sides, based upon laboratory research and “in-the-trenches” anecdotal evidence, this article is not to make a case for either, but rather to share some of the best possible machine substitutions for six commonly used, basic free-weight exercises.

Here are the six machines that best match their free-weight counterpart.

Solid substitution for the barbell squat.

This is about as basic as it gets, and without a doubt this movement is largely responsible for some of the biggest quads ever developed.

Awesome advantage(s): You can easily vary your foot position on the platform from high to low, and close to wide. This will allow you to target different sections of the thigh, as well as bring more hamstrings and/or glutes into play when desired.

Solid substitution for the dumbbell flye.

This movement isolates (to a larger degree than presses) and works the chest very efficiently by allowing for a very complete range of motion and a powerful stretch.

Awesome advantage(s): Not only does this machine allow for a terrific stretch just like DBs, but it also provides a peak contraction effect so that you can squeeze the muscle intensely against resistance.

An excellent exercise for targeting the abs or the lats. It provides an excellent stretch, and allows for heavy weights to be used while keeping the lower back stable.

Awesome advantage(s): You can get an even deeper stretch using a machine since the floor is not a limiting factor, as with DB Rows. Additionally, the seated, rather than bentover, position of the torso is far easier on your breathing, which may help you push your sets further.

Along with the bench press, this exercise is a must for those seeking a monster-size chest, with even development from top to bottom.

Awesome advantage(s): This machine not only provides a different feel than the basic lying incline press, it can also be used unilaterally without worrying about stabilizing the torso. In addition, no spotter is needed so you are free to push to complete muscle failure without the aid of a training partner.

Solid substitution for the dumbbell side lateral.

An amazing exercise for creating width in the shoulders when done correctly. Unfortunately the majority of lifters go too heavy and swing the DB’s to the top with the help of momentum, rather than forcing the medial delts to perform the brunt of the work.

Awesome advantage(s): This machine is one of my personal favorites, as it does a better job than DBs at putting direct “pressure” on the lateral delt heads, and also allows for a more intense peak contraction at the top. Additionally, it forces the lifter to use more strict form, which will manifest better results.

Solid substitution for the wide-grip pullup.

This is one of the most basic back exercises one could perform, and was a staple in most lats-building programs before machines became available. And while it’s still a movement that should be included in one’s routine now and again, it can become tough to perform when a great amount of size/bodyweight is achieved.

Awesome advantage(s): The reason for this particular machine over pulldowns is because it more closely mimics pullups and still forces the lifter to move his/her body through space, rather than remaining stationary. For those who are not yet strong enough, or have become too big (not a bad problem to have), to perform several sets of 8-12 strict reps, the assisted pullup machine serves as the perfect back-blasting option.