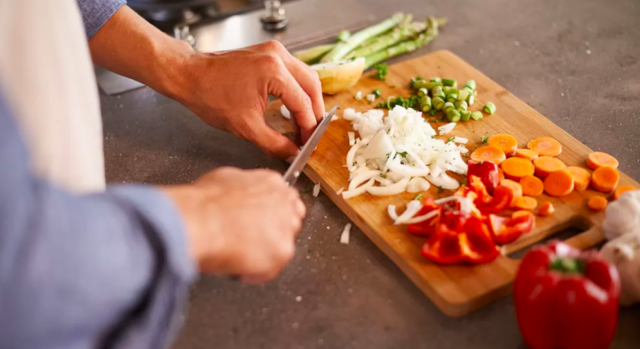 Hunger cravings can often be convincing enough to get you to cave, and that one sugary or fatty slip up can lead to a devastating domino effect.

A solution would be to feel full without eating more. For tweaks you can make to help do that, we asked Dr. Jonny “The Rogue Nutritionist” Bowden, PhD, CNS, author of The Great Cholesterol Myth, and an expert on weight loss and nutrition to pitch in with a few tips.

Despite the seemingly unappealing title—“high volume” sounds like it’s going to add mass to your gut—health-conscious eaters should learn to embrace the term. “High-volume foods like vegetables and fruit contain a lot of fiber and water, but not a lot of calories,” says Bowden.

In other words, they’ll make you feel full. Just make sure you opt for fresh fruit over sugar-packed canned or dried fruit. With veggies, be mindful about how they’re prepared. Translation: Go easy on the butter and oil.

Research published in a 2012 edition of the journal Flavour showed that foods with a stronger aroma caused people to take smaller mouthfuls. One hypothesis is that strong fragrances send signals to the brain that the food you’re about to eat is higher in calories and more filling. Looks like you might want to add tuna fish to your shopping list.

Your dinnertime conversation may not be as lively, but you could end up consuming less food. In 2012, Dutch researchers had 70 pairs of women dine together in a lab disguised as a restaurant and noted how the diners took bites at roughly the same time. Although that synchronization tapered off toward the end of the meal, it helped corroborate other studies showing that A) people often match their food intake with their eating partners, and B) people are likely to consume more food in a group setting.

A Chinese study that appeared in a 2011 edition of the American Journal of Clinical Medicine looked at the chewing habits of obese and skinny men. Not shockingly, the larger dudes chewed less and ingested their food quicker than the toothpicks. While we wouldn’t rely too heavily on this technique, the researchers claimed that chewing 40 times instead of the average 15 translated to 12 percent fewer calories.

5. Be Diligent About Protein Consumption

We recommend people who train hard consume 1 to 2 grams of protein per bodyweight. Not only does that ensure your muscles are being replenished and rebuilt following a tough workout, but protein is more filling than carbohydrates and fats.

“Protein has a decided affect on satiety—way more than carbohydrates,” Bowden explains. “If you want to feel full on less food, you should not be eating a low-fat diet that’s high in carbs; you should be eating a high-protein, high-fat diet and you won’t need that much [food] to feel full.”

Carb-heavy foods like white rice, cold cereals, and bagels can cause an insulin spike. Insulin, as Bowden points out, is also know as “the fat storage hormone.” Translation: You want to learn to keep it in check.

“Eating high-carb, processed foods creates more hunger and cravings,” Bowden says. “When you eat those high-carb meals it causes blood sugar and insulin to go up … [and] you can end up on this constant blood-sugar rollercoaster …  where you never feel full. Wouldn’t it make sense to eat the foods that don’t cause that hunger? That’s what low-carb diets do. You can consume five bowls of Cheerios in one sitting … but you can’t consume five steaks and Brussels sprouts because … there’s a signal to your brain that says you’re full.”