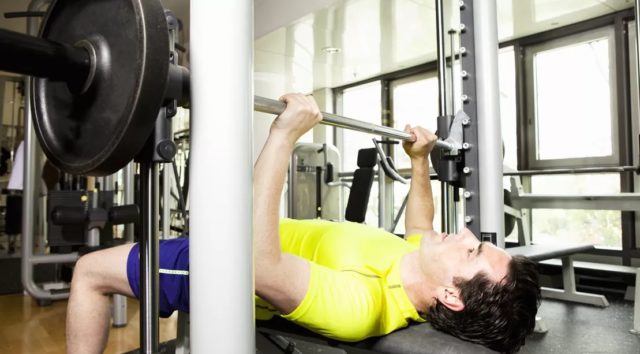 Here at Muscle & Fitness, we’re fans of free-weight compound moves for building muscle and improving your overall musculature. Moving the body through its natural range of motion is, after all, inherently functional. It just so happens that you end up getting jacked and ripped training this way, too.

But the Smith machine definitely has its place in the annals of physique history, too. Despite locking users into a set range of motion, the Smith allows you to safely handle more weight, sans spotter. And the vertical path of the bar actually lends itself to more moves than you may have realized.

Here are six ways to get more out of the Smith machine
1. Don’t just raise it, throw it.

Up, down. Up, down. Bench presses and squats at the Smith are perfectly acceptable exercises when you want to diversify your routine. But they can get a little stale. WWE strength and conditioning coach Rob MacIntyre suggests doing more than raising the bar. He suggests throwing it, a move known as a ballistic bench press.

“The ballistic bench press is an exercise I see being very useful on a Smith machine,” he says. “In this exercise, you actually throw the bar out of your hands and catch it on the way down using the stretch reflex to repeat the motion. It’s for more experienced lifters but can help develop upper body explosiveness.”

Named after famed strongman Bill Kazmaier, the Kaz press is akin to a close-grip bench press. The main difference is that the fixed range of motion of the Smith keeps the weight in more of a vertical, rather than an arched plane.

“It’s hard to argue with one of the strongest man of all time,” says Josh Bryant, C.S.C.S. “Kaz presses are very elbow-friendly. They limit shoulder and chest contributions and can be performed at very heavy weights.”

When it comes to lower-body focused exercises, free weight barbell squats are king. But the Smith lends itself to another version of the squat that is of great value: the hack.

“Hack squats are easy to perform in a Smith and you can really target the muscles of your quads,” says David Sandler, M.S., C.S.C.S. “I do six sets—two with my feet really wide, two with a normal stance, and two with a narrow stance. And since the bar is controlled, I lower myself as deep as possible—well below parallel, to crushing-soda-cans-with-your-butt depth. Step out so that you are on slight angle leaning back slightly against the bar. Take your time, tighten your core and hit 12 good deep reps for 4-5 sets.”

This would be a great alternative to the leg press as your second move on leg day.

Everyone benches. Not everyone benches on an incline. Going heavy on the incline bench can be intimidating unless you have a reliable spotter. But with the Smith, you are less reliant on a vigilant training partner – if you fail, you can just flip your wrists and re-rack the weight.

“I think the incline press is the best Smith machine exercise,” says Justin Grinnell, C.S.C.S. “Especially without having a spotter, you can load a ton of weight on the bar and be safe. You can also do rest-pause sets and drop sets very efficiently.”

So if you’ve been lagging in the upper-chest department, the Smith may be your best bet.

The walking lunge is one of the most functional, yet body-altering moves that you can do in the gym. It hits all the major muscles of your lower body, it requires a great degree of balance and stability and it’s a major energy-suck. But every once in a while, it is in your best interest to challenge yourself to really see how much weight you can handle with it. Enter the Smith.

“My favorite move performed on the Smith machine has to be the stationary lunge,” says Jim Ryno, C.P.T. “You can really set yourself up directly under the bar nicely without needing as much stabilization as you would if you were performing the same move with free weights in open space. This will allow you to blast out some more serious weight and really increase the isolation of the glutes, hamstrings, and quads.”

For years now, the training public has grown in its fear of the behind-the-neck press with stories abounding about how it can cause injury. Well for every one of those stories, we also have a handful that were done doing more ubiquitous moves like the curl or the bench press. When done properly—after a detailed warm-up and using an appropriate load—the behind-the-neck press can be perfectly safe. The safety factor is increased in the Smith apparatus.

“I like the behind the neck, limited range of motion shoulder press because it keeps the intensity within the confines of the deltoid muscles while delivering a crystal-clear message to build new muscle,” says Eric the Trainer, a member of the M&F advisory board.

He suggests taking the bar behind the head to about eye level before reversing pressing through to full extension. Going lower may compromise the integrity of your shoulder and should only be attempted in the presence of a reliable spotter.

After Fighting Down Skin Cancer, Hugh Jackman Is Reminding You To Wear Sunscreen.

For more energy, take the stairs instead of drinking your daily cup of coffee