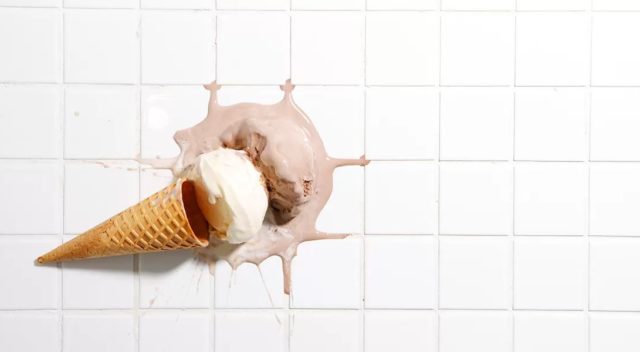 You’re looking great—you’re sticking to a low-fat diet, balanced with plenty of complex carbohydrates, fruits, veggies and lean protein. And then it happens. You stumble, fall and commit a dietary blunder. With the day nearly complete, you find yourself suddenly pulling into the nearest fast-food joint ready to scarf down a large combo: fries, the greasy burger, the drink big enough to throw blood-sugar levels into a tailspin.

You’re distraught and filled with guilt as the drama continues. “Heck, I’ve already blown my diet. I might as well really blow it,” you reason. With a defeated attitude, you speed home and indulge in the best of Ben & Jerry’s, with maybe a Ding Dong or two for good measure. Still, you look for hope. “Tomorrow’s another day,” you think. “I’ll go right back to my super-strict diet.” Sound familiar?

With the desire and pressure to look great, people tend to follow an absolute path. We try for complete nutrition perfection. Problem is, we’re human—we can’t be perfect all the time. An important part of looking perfect—okay, at least near-perfect – is understanding the burdens of striving for that head-turning physique. Check out the common dietary pitfalls below. We’ll show you how to make the very best of potentially disastrous situations.

The principle of moderation is the key to a successful diet. Some dieters put certain foods completely off-limits, claiming calorie-dense foods like pizza, ice cream or cake lead to all-out gluttony. They believe that a single slice of pizza can trigger the consumption of the entire pie. Therefore, some dieters practice abstinence. No pizza, no desserts. Ever.

This strict strategy can be counterproductive, according to Suzanne Girard Eberle, MS, RD, and author of Endurance Sports Nutrition (Human Kinetics, 2000). “Every binge is preceded by a strict diet,” she notes.

Instead, Eberle advises a moderate approach to leaning down, complete with foods that might fall into the trigger category. Instead of doing without your favorite foods, she recommends responsible moderation: “Set yourself up for success. Eat less of your trigger foods, but don’t eliminate them.”

Eberle believes women can incorporate a 150-calorie snack and men can have a 200-calorie snack every day. That means the small serving of soft-serve ice cream is a go! A carefully measured slice of cheese pizza could come in under the 200-calorie mark, as could half a candy bar.

The bottom line here is to identify your weaknesses and trigger foods, and enjoy them—in moderation. 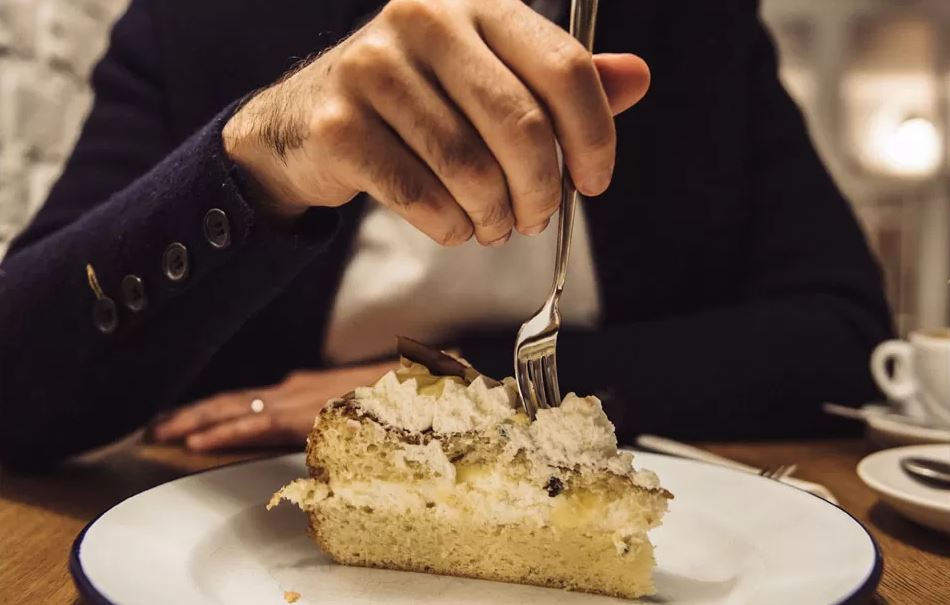 One dieter striving for perfection confessed, “I ate three egg whites and a slice of dry toast for breakfast, an apple mid-morning, a healthy lunch consisting of soup and a small salad with no oil, and a dinner of fish with a green vegetable around 5 p.m.” Sounds pretty darn strict, right? Listen to the sin: “At 8 o’clock, I ate a half-dozen cookies and a large bag of chips.”

The big mistake, Eberle explains, boils down to a lack of fuel. “Many people who eat way too much at night need to re-evaluate their eating patterns,” she says. “They may not be eating enough during the day, which leads to a desire to eat at night.”

Eberle points out that nighttime nibblers tend to stand and snack, which is another problem. “Sit when you eat! Standers tend to munch without realizing the quantity of food they’ve eaten,” she suggests.

To fix the problem, Eberle advises eating up to two-thirds of a day’s total calories before dinnertime. “Not meeting your energy needs during the day and then back-loading at night is the perfect scenario for gaining fat. Switch it around and eat during the day, give the body the fuel it needs, and then cut back at night.” Eating more, earlier will cage those late-night hunger demons, eliminating Sin No. 2. 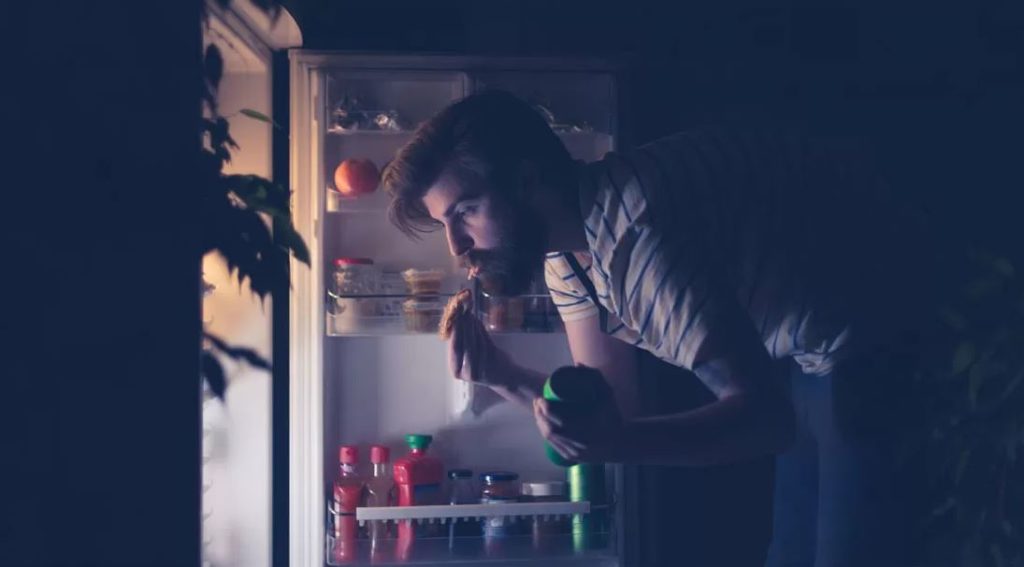 Next time you’re starving and on the road, skip the 1,200-calorie meal combo and make a better choice. According to two pro athletes, fast food doesn’t have to lead to dietary transgression.

IFBB pro bodybuilder Garrett Downing incorporates drive-thru food this way: “When I’m in contest mode, I go places where I know I can get the equivalent in nutrients for what I normally would be eating at that time.

For example, if I’m supposed to have 200g of chicken, a serving of vegetables and the equivalent of a cup of rice, I can pull into a Wendy’s and pick up a plain baked potato and two grilled chicken breast salads as a substitute.”

New York City pro fitness champion Adela Garcia-Friedmansky eats out often and orders her meals dry. “Most restaurants have chicken breasts, fish, rice, potatoes and vegetables, and they can prepare them steamed, baked or without oil.”

When it comes to fast food, she agrees with Downing. “You can stay in good shape if you stick with the low-fat items that many fast-food places serve. Every few days, if you want a chicken burger along with small fries, you can do it if you’re training hard, doing your cardio and paying close attention to your diet at all other times.”

Garcia-Friedmansky will splurge every 3-4 weeks. “I’ll go for a McDonald’s cheeseburger with fries and a diet cola,” she says. She figures the meal yields a hefty 800 calories, which is fine in her book. “If you want the greasy stuff once in a while, that’s okay, too. Just don’t make a habit of it.” 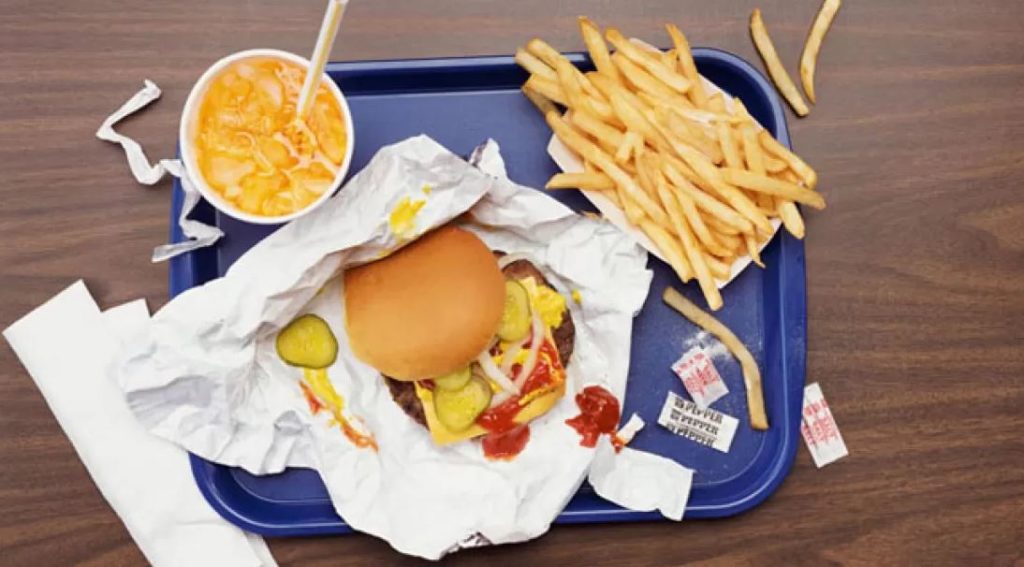 You start each day planning for the best, but then those cinnamon rolls by the office coffee pot catch your eye, and there goes another perfect day. According to Larry Krug, MS, a renowned Hollywood exercise physiologist and nutrition consultant, workplace sweets can be replaced with healthy snacks and techniques to avoid those traps.

“If you have access to healthy choices, you can get around those mistakes. A plain bagel or a bagel with low-fat cream cheese is a better way to go than a doughnut or cake, which is full of sugar and fat.”

If your workplace serves nothing healthy, Krug says you must tote food or snacks along with you. When there’s no better choice, or if you have to attend a work function where only junk food is served, Krug suggests pre-eating. “If you show up satisfied, having recently eaten something that is healthy and adequate in calories to meet your energy needs, it’s easier to say no to the junk and empty calories.” 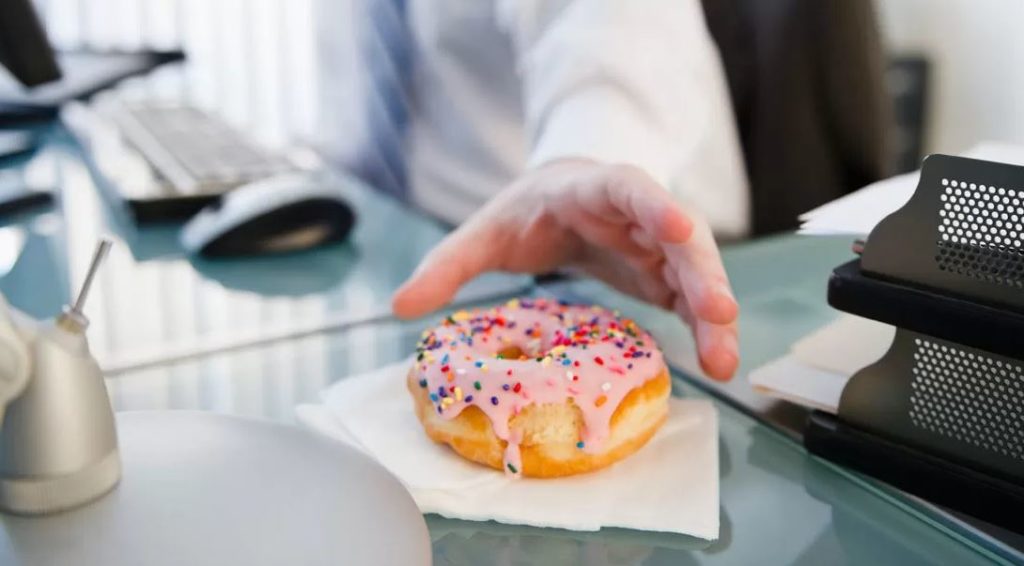 The calorie-counting bodybuilder trying to hold onto a six-pack set of abs sometimes needs a reality check, says Krug. “To be strict all of the time is about self-denial,” he says. “Denial surpasses the limits of willpower. It’s more of a compulsive behavior that sets a person up to fail. When the dieter eats something thought to be an off-limits food, he gets down on himself and goes overboard, eating way too much.

“I think it’s healthier and more effective to follow a strict plan 80% of the time,” Krug continues. “If you’re eating five meals a day, you can take a meal and include some food that may be higher in fat or sugar.”

Another way to follow Krug’s advice: Eat strictly for four days—low-fat, high-fiber, lean proteins—and then increase your carbohydrate content on the fifth day. Have a larger portion of bread or pasta, indulge in a dessert, or eat out and order a favorite dish. The take-home message is to indulge in some foods that might not be very low in fat or devoid of sugar.

Krug summarizes the issue: “A great body is the result of consistency and eating very strictly most of the time, though not all the time. I subscribe to the idea you can stay lean and even improve upon your body composition by staying strict 80% of the time. That leaves you room to fudge.” 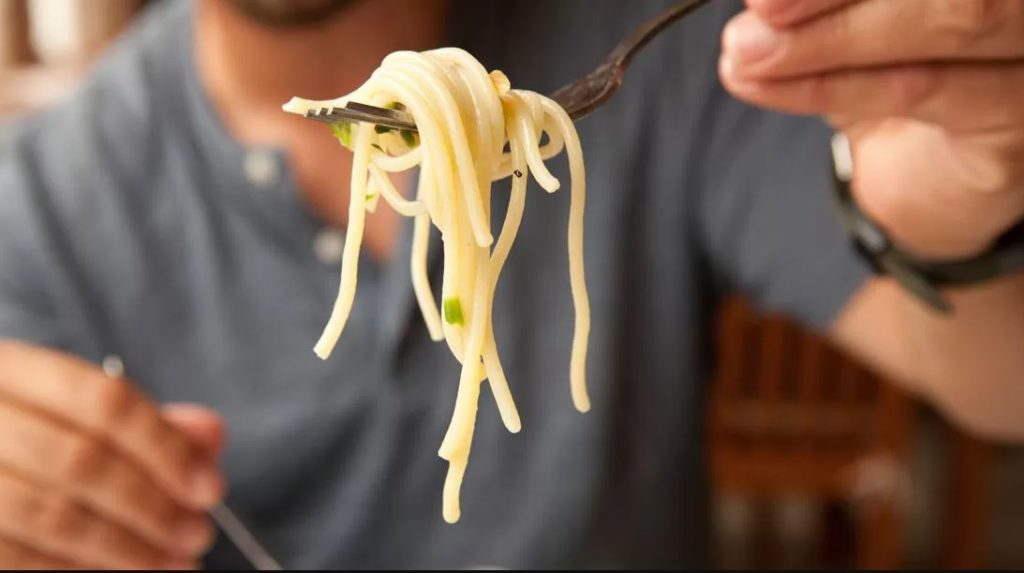 Some bodybuilders view sugar as Public Enemy No. 1, while others believe sugar’s not so bad. Those in the former category may wind up fighting severe cravings, when instead they could get a lot by giving in a little.

According to chef and IFBB professional bodybuilder Laura Creavalle, sugar is not the bully many make it out to be. Calories are most important.

“When I started, I used to stay away from anything with sugar, even juices. That’s what I thought was the right thing to do. Unfortunately, the temptation for something sweet would drive me crazy and I wouldn’t stop at something sweet—I’d make an entire day into a marathon binge. Later, I learned that losing weight, for the most part, is about eating fewer calories than you need each day and expending energy through exercise.”

These days, Creavalle dampens the sugar devil by scheduling a daily sugar fix. “Sugary foods are least likely to be stored as fat when you eat them after your workout,” she says. “After I’m finished training, I always have a handful of Reese’s Pieces or peanut M&M’s. I don’t need a lot. Just a taste.” That’s sufficient to keep her happy, her sweet tooth at bay and her finely sculpted physique lean and hard. 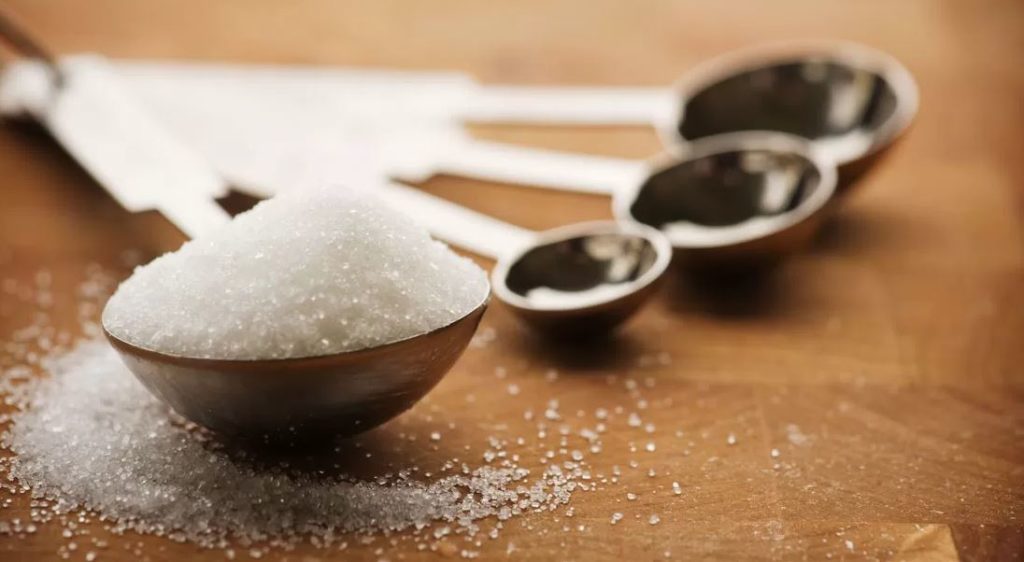 There may not be a voluminous file of scientific literature correlating fast eating with bodyfat, but successful dieters and fitness buffs will tell you to slow down. Those who chomp, barely chew and swallow fast, says Krug, end up overeating, which leads to gains in bodyfat.

“It takes time for the food in the stomach to signal the brain that the body has eaten enough,” Krug says.

As food passes through the stomach, it sends chemical messengers through the nervous system, promoting a feeling of satiety or being full. When you take your time and thoroughly chew your food, you become more tuned-in to satiety and to how much you’ve eaten. As Krug notes, “Enjoy the process of getting into shape and maintaining a fit lifestyle.”

He’s right. Life is about pleasure. Apply the principles above and you’ll maintain muscle, strip away the fat and feel good doing it! 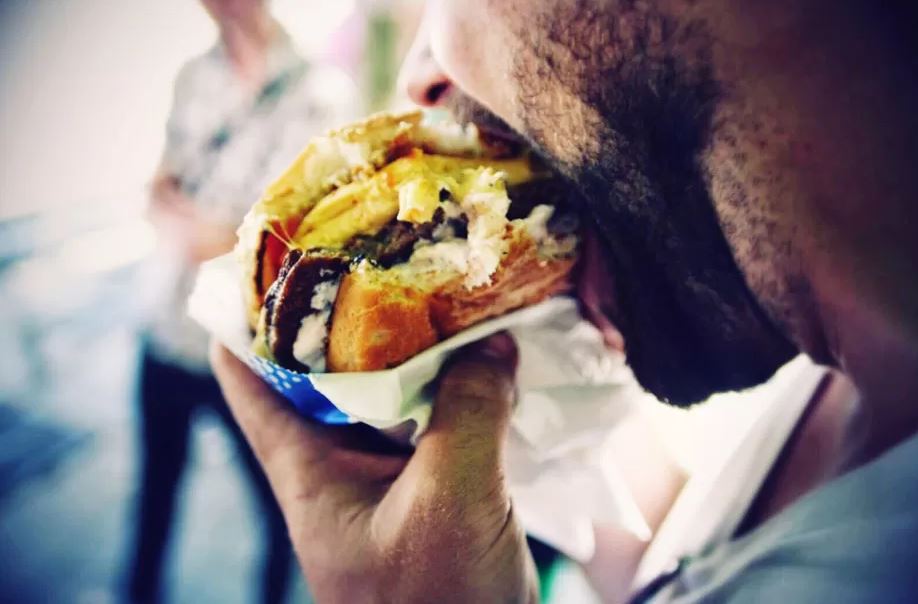 5 foods to eliminate from breakfast