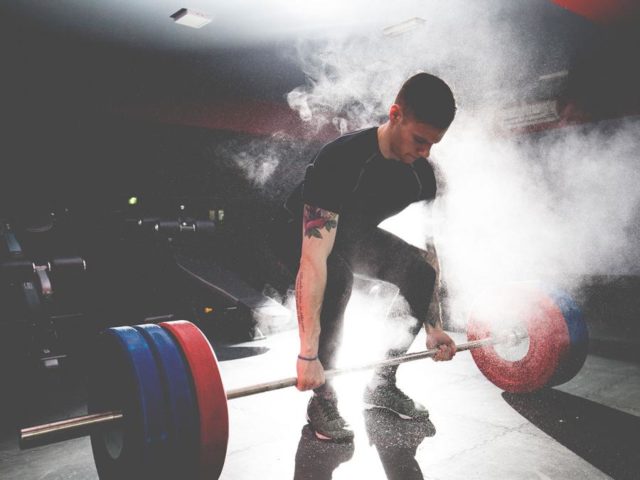 FOR DUDES, TESTOSTERONE IS the holy grail of hormones—it’s what literally makes us men. Often referred to as the “male sex hormone,” testosterone drives gains in muscle mass, bone density, body hair, and changes the timbre of your voice when you go through puberty. Testosterone also regulates important functions like sex drive, muscle and bone mass, muscle strength, fat distribution, and red blood cell production.

Guys who are interested in bigger and stronger muscles (along with increased libido) are constantly on the hunt to find easy ways to boost testosterone. But besides taking potentially dangerous drugs or getting a prescription to inject testosterone to build up flagging levels, the only foolproof techniques to increase and maintain healthy levels are lifting weights and eating the right foods, says Thomas King, M.S., C.S.C.S., strength and conditioning coach at JK Conditioning in St. John’s, Newfoundland, Canada.

“To maintain high testosterone levels, it is best to eat foods high in magnesium, zinc, and vitamin K, like dark leafy greens for magnesium, shellfish to get a healthy dose of zinc, and plenty of egg yolks for vitamin K,” he says. “Heavy resistance training exercise protocols have been shown to increase T levels in men.”

Testosterone-building workout: How it works

Perform the workout featured below three times per week on nonconsecutive days, King says. “An added bonus of this training system is that it allows your weekends to be rest days.” Exercises labeled with a letter (“4A” and “4B,” for example) are performed as supersets: Do the second exercise set right after the first one, resting only after the second set.

Each workout, change up the routine by doing a variation of the deadlift or squat. For the deadlift, you can do a suitcase deadlift, sumo deadlift, deficit deadlift, or Romanian deadlift. For the squat, you can do front squats, back squats (high or low bar), or safety bar squats. In both cases, make sure you adjust the weight accordingly.

Set a barbell on a power rack at about shoulder height. Stand in front of the bar and grasp it with hands at shoulder width and raise your elbows until your upper arms are parallel to the floor. Take the bar out of the rack and let it rest on your upper back—as long as your elbows stay up, you’ll be able to balance the bar. Step back and set your feet at shoulder width with toes turned out slightly. Squat as low as you can without losing the arch in your lower back.

The sex positions that can help you last longer in bed