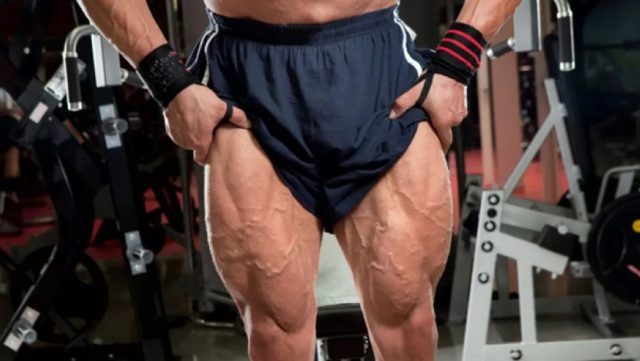 Get a Leg Up

Powerful, strong legs are paramount for overall power, athletic dominance and symmetrical balance. So why do so many “bros” skip leg day or bring the intensity of a poodle pumped up on estrogen.

Well, for one, they can hide weak development with 90’s retro bodybuilding pants but the main reason is they don’t want to do the hard work. Tom Platz and Branch Warren have the two best sets of wheels to ever grace the bodybuilding stage and what do they have in common? Only being the two hardest-working bodybuilders of all-time.

For a leg-training workout to be productive it has to be an intense and brutal session—except for a few genetic anomalies, there is no way around it. Your legs are made up of the largest muscles in your body so you gotta train heavy!

If you don’t have the squat in your program you don’t know squat about leg training.

Squats have been the go-to for leg development for bodybuilders like Ronnie Coleman and Tom Platz as well as the who’s who for strength athletes for strength development.

Squat with a full range of motion and go heavy, regardless if it is a single repetition or 20. Bring the intensity and train a variety of rep ranges.

Strength Coach Mark Rippetoe best sums up the importance of squats and why they work your legs to exhaustion, “There is simply no other exercise, and certainly no machine, that provides the level of central nervous activity, improved balance and coordination, skeletal loading and bone density enhancement, muscular stimulation and growth, connective tissue stress and strength, psychological demand and toughness, and overall systemic conditioning than the correctly performed full squat.”

The former Soviets and adept American strength athletes have benefited from this exercise for decades.

This movement is like a compound leg curl that highly engages the glutes. It is a compound movement because knee flexion and hip extension both take place.

When you become proficient, you can add resistance by placing a barbell behind your shoulders like a squat, holding a weight or going against resistance bands. Originally, this machine was called the glute-ham-gastroc machine because it even hits the calves.

In Ronnie Coleman’s prime, he did walking lunges with 405 pounds for a 50-yard lunge! Quoting Brian Dobson, “The walking lunge has now become standard for upper leg separation and glute/ham tie-in.” Lunge variations not only assist in total leg development but also strengthen the core and increase stability in heavy squatting.

The hamstrings are responsible for knee flexion (bending) and assist in hip extension.

For full hamstring development, both functions must be worked. Leg curls may not seem “functional” but they certainly overload knee flexion.

There is nothing “sexy” about leg curls but let’s forget about what’s new and concentrate on what’s a necessity to build great hamstrings.

Hamstrings are primarily made up of fast-twitch muscle fibers, so primarily keep reps eight or fewer and go heavy!  Occasionally, do throw in high-rep sets so no stone is left unturned.

Back in the day, sissy squats were a mainstay in the leg routine of champion bodybuilders but as chrome machines made their way “in”, sissy squats gradually became a forgotten relic.

The beauty of sissy squats is you need nothing beyond yourself; with the elimination of the weight pile behind prison walls in the 1990s, these have become a favorite of incarcerated brethren looking to build some big ol’ tree trunks.

Make sure to perform these for high reps using a full range of motion—the stretch element is what makes sissy squats such an effective quad builder.

Want to really engage in some quadriceps masochism?

Try supersetting these bad boys with leg extensions to failure.

You ever notice the fact that sprinters and Olympic lifters have better hamstring development than top-rated bodybuilders? The reason is the way they train.

The ways to drag a sled are like the whiskey selection at an Irish pub—numerous!

Additionally, this movement will test the strength of your torso, grip, balls (figuratively) and all without placing a huge strain on your lower back. Backward simply means you are facing the sled and pulling it backward. You will be leaning backward with your arms straight and pulling away from the sled with maximum intensity; if this looks like a relaxing back pedal—add more weight.

11 SIGNS YOU’RE EATING TOO MANY CARBS

5 GREAT THIRST-QUENCHING DRINKS FOR AFTER A HARD WORKOUT

HOW TO MEET WOMEN