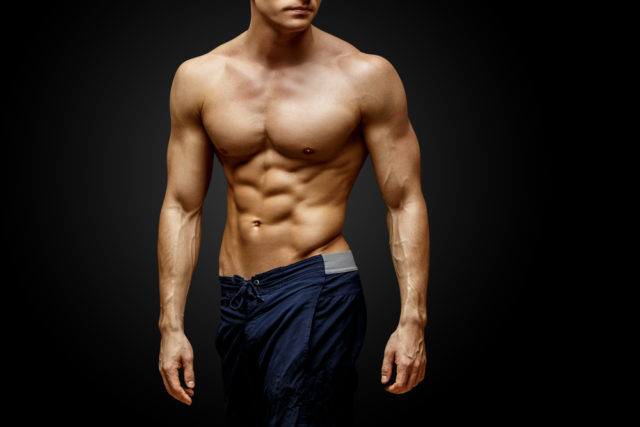 There are pecs and then there are boobs. And it turns out, up to 50% of men in the U.S. have the latter, according to a review from the Cleveland Clinic Journal of Medicine. And FYI, the condition’s called gynecomastia.

But don’t buy stock in the bro (thanks, Kramer!) just yet. Assuming you aren’t born with a genetic disorder like Klinefelter syndrome that can cause the condition, bra-ready jugs are pretty simple to avoid if you heed the causes. Breast tissue—which both women and men possess—feeds off of estrogen hormones. While women naturally have more estrogen, and men naturally have more androgen hormones, men can easily get their estrogens-to-androgens ratio out of whack. The result: sprouting boobs faster than your high school’s head cheerleader.

Pounding a six-pack of beer every night is bad for more than one’s belly. Alcohol affects the liver’s ability to get rid of excess estrogen. Plus, phytoestrogens (compounds that mimic true estrogen in the body) are present in the hops used to make beer, and in plants involved in the making of alcoholic beverages. What’s more, severe drinking can cause damage (cirrhosis) of the liver. And because the liver is largely responsible for metabolizing hormones, a less-than-efficient one can convert many androgens into estrogens, resulting in an exceedingly feminine chest, says Robert D. Galiano, MD, a plastic surgeon at Northwestern Memorial Hospital in Chicago.

A shrinking scrotum isn’t steroids’ only threat to your manhood. So are “bitch tits,” a name reserved for the breasts men grow after taking anabolic steroids to bulk up. This phenomenon is caused when the body converts the ridiculous amounts of testosterone in steroids into estrogen, says plastic surgeon Elliot W. Jacobs, MD, who specializes in gynecomastia surgery in New York City. About half of his gynecomastia patients are bodybuilders, many of whom either have B and C cup-size breasts as well as puffy nipples, he says.

Sure, more fat can put some padding on your chest, but it can also throw your muscle-to-fat ratio out of whack. “As your ratio of fatty tissue to lean tissue raises, the body produces more estrogen hormones and less androgen hormones,” Galiano says. The result: real, live boobage. No wonder it’s so hard to find a date while sporting a (nonsilicon-induced) 32DD-size chest.

Deprive yourself of adequate nutrition and your testosterone levels will drop. Your estrogen levels, not so much. While some men develop breasts during times in which they are skimping on food, others don’t grow breasts until their nutrition levels and food intake return to normal. Commonly referred to as “refeeding gynecomastia,” the phenomena was first noted in 1945 in the Journal of the American Medical Association, when men liberated from World War II prison camps grew breast tissue within a few weeks of resuming an adequate diet. While the exact cause of this type of gynecomastia is unknown, significant weight loss and malnutrition are often accompanied by hypogonadism, in which the testicles produce little to no hormones, according to researchers from the State University of New York at Stony Brook.

What’s in your medicine cabinet? Medications are to blame for a quarter of all cases of man boobs, according to research published in the New England Journal of Medicine. More than two-dozen prescription drugs have estrogen-like properties, raise levels of estrogen directly, or include androgen hormones that can be converted into estrogen, says Galiano. These include commonly prescribed medications such as amphetamines, antidepressants, blood pressure drugs, and antibiotics. But chances are your doctor hasn’t told you about their super-unsexy side effect. “It is so rare that most doctors don’t worry about it,” Galiano says. “Ask your doctor if your current medications can cause gynecomastia, and if you are on any of them, tell your doctor if you begin to see any changes before it gets out of control.”

Need another reason to shun the cigs? Let’s try this: “Cancers can produce hormones for their own benefit and growth, which can result in hormone imbalances and in turn make breasts grow,” Galiano says. While gynecomastia can occur as a result of various forms of cancer (including testicular cancer), lung cancer is among the most common reasons for cancer-related breast growth—and is also, of course, one of most preventable forms of cancer.

A 2007 study in the New England Journal of Medicine found that when applied topically, tea tree oil and lavender oil—common ingredients in shampoos, lotions, and soaps—can cause gynecomastia. The pure oils mimic estrogen activity and dull the effects of androgen hormones in the body, according to study researchers. So before you start lathering up with your girlfriend’s shampoo, check its label.

It doesn’t matter if pot is legal in your state, marijuana is still a no-no…at least as far as your chest is concerned. Abusing weed (as well as heroin, amphetamines, and methadone) can cause increased amounts of breast tissue in men, according to the National Institutes of Health. While the exact mechanism isn’t known, studies suggest that marijuana depresses testosterone levels for up to 24 hours.

Talk about backfiring: The infamous chest thud experienced when shooting a rifle can cause breast tissue to grow. In fact, the German Armed Forces Hospital of Berlin has found that shooting drills have contributed to serious gynecomastia in more than 70% of the German military’s Wachbataillon unit (which performs precision military drills at official ceremonial functions). While it’s unknown why a rifle’s backfire raises estrogen levels at the area of impact, you might be wise to not spend all of your time skeet shooting.