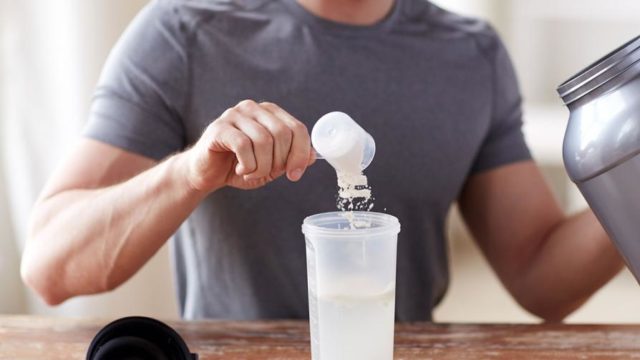 EVERY GUY WANTS to get big—but there’s a difference between bulking up and ballooning out. The formula is tricky: You need to work out in a manner that both builds muscle and burns fat, while also refueling to encourage muscle growth but not fat accumulation. There are countless factors that feed into reaching that sweet spot, but we’ve tapped experts to share nine of the biggest.

Cut back on the booze

We know—this is the advice you always hear and never want to take. But hear us out: Even if you ingest the proper post-workout protein, hitting happy hour after the gym hampers your muscle protein synthesis—how much muscle is being built to repair exercise damage—according to a 2014 study in PLos ONE. Then there’s the fact that it’ll take you longer to get back at it (not even including the hangover), as recovery from delayed-onset muscle soreness is slowed by booze, says a 2012 New Zealand study. To top it off: “Since men are prone to store fat around the gut and near major organs, and alcohol consumption is also associated with increased fat storage in this area, it’s wise for them to lay off the booze when trying to see progress,” says Franci Cohen, personal trainer, certified nutritionist, exercise physiologist, and founder of Fuel Fitness in Brooklyn.

Scale back at the gym

Hitting HIIT every day of the week? Kudos to your commitment—but it may actually be thwarting your progress. “So many people in the gym are actually over-exercising and destroying their metabolisms, making it hard to not only add muscle but also keep body fat under control,” says trainer Brad Davidson, author of The Stark Naked 21-Day Metabolic Reset.

Your body views working out the same as it would running from a lion—the adrenal glands will keep you in a heightened state of awareness (that “fight or flight” response) for as long as it feels the threat. Exercising for excessive amounts of time is basically telling your body the lion won’t leave you alone, forcing the adrenals to dig deeper and deeper to keep you functioning at the heightened state, never allowing for the opportunity to reach the recovery stage, he explains. As the damage keeps building, the adrenals are forced to rob amino acids and hormones from other organs, like the thyroid, to keep up with the demand. This then causes those organs to become sluggish, dragging your metabolism down and fat accumulation up. Plus, this process depletes your supply of the hormones that become testosterone—a healthy supply of which is necessary for muscle recovery and regrowth, Davidson adds.

So how much is too much? Everyone’s threshold is different, depending largly on the stress load from the rest of your life, like sufficient sleep and diet. Davidson’s rule of thumb: If you have a high-stress life, help your body by scaling back HIIT routines to only twice a week, with low-intensity cardio the other days. “As my clients gain control on their high-stress lifestyles, I build them up to four high-intensity training sessions a week with low-intensity cardio and play days worked in on the other days,” he says.

Trade in your protein powder

“Research shows there’s a lot of benefit to whey protein on muscle/weight gain, but I find over and over through lab testing that so many people are sensitive or allergic to whey protein,” Davidson says. If your body doesn’t handle whey well, you may still bulk up—but it’s likely going to be from fat or water weight. Food sensitivities and allergens trigger a system-wide immune response that can lead to a dramatic increase in inflammation, causing insulin-resistance issues and unwanted fat gain. Luckily, rice protein isolate may be just as effective as whey in trimming fat and increasing lean body mass, muscle mass, strength, and power, according to a 2013 study inNutrition Journal. So, if you’ve found you don’t tolerate whey all that well, try switching temporarily to see if you feel/see a difference.

Stick to a routine

“One of the biggest mistakes guys make is hopping from program to program—it’s like fitness ADD,” says Adam Rosante, C9 Champion brand ambassador and author of The 30 Second Body: Eat Clean, Train Dirty & Live Hard. You need consistency in your training to see results. Most gym rats will benefit in bulk from sticking to a routine for 6-8 weeks. But if you’re new to the gym, take longer before switching so your brain and muscles can truly become conditioned to the coordination and load required to build bulk.

Bulk isn’t built by loading plates onto the barbell. Gains are made during the eccentric portion of every move, when your muscles are stretching out, Cohen explains. That means you’re better off focusing on proper form rather than max load. When you’re bench pressing, extend arms overhead for 2-3 seconds during the concentric movement. On the way down—the eccentric portion—try and slow it so it takes 5-7 seconds to return to the bottom. Same goes with the lowering portion of a squat, a bicep curl, a pullup—you get the picture.

The debate over how many carbs you should eat in a day is an ever-evolving battle—and a very tricky formula. One thing is for sure: “Many guys think they have to eat excess calories to gain muscle, but if you take in more than you need, you will gain fat,” says personal trainer John Rowley, best-selling author and director of wellness for the International Sports Sciences Association. Excess protein for your body is fine, but after it has burned enough carbs for fuel, it stores the macronutrient as fat. In other words, consuming too many carbs causes you to accumulate fat.

On the other hand, though, you have to ingest carbs to grow, Davidson points out. They are your body’s first choice for fuel, meaning you have more accessible energy; they dramatically enhance recovery post-workout; and they help keep your cortisol levels down so stress doesn’t wreak havoc on your body.

But when you eat them is crucial, Davidson adds. “With clients, I’ve found carb-loading after training sessions is ideal for muscle gain and controlling fat accumulation,” he says. And science agrees: Eating carbs before exercise can actually decrease the fat oxidation rate that comes from a workout, but not when you eat carbs after your workout, according to a new study in the Proceedings of the Nutrition Society. Why? For muscles to grow, you have to shift the body from the breakdown state to an anabolic rebuilding state to recover from the damage done during the workout, he explains. One of the best ways to do this is via insulin, which is produced as a result of eating carbohydrates.

“The key is to find the lowest number of carbs you need for optimum performance,” says Rowley. A good place to start is by cutting carb intake down to 30-50g a day for the first two weeks then gradually adding them back until you find the right amount for you. How will you know? Feeling tired or sluggish is a sign you need more of the fuel.

“One of the keys to results is to progressively overload your body—but how can you be sure you’re doing that if you’re not writing down how much weight you’re lifting week to week?” Rosante points out. “If you’ve got a radical memory to help you store all your training stats to compare and contrast each session, then hats off to you. For the rest of us, it helps to write it down.” In fact, writing down and/or publically posting your weights and reps will increase your likelihood of achieving any goal, according to a recent study from the American Psychological Association.

We’re huge fans of supplements—they can improve performance in the gym, allowing you to build muscle and shed fat with greater ease. However, this is only the case when you’re popping the right pills—and alongside a proper diet. “Unfortunately, many men get clouded by the concept that more pills equals more muscles,” says Cohen. “Focusing too much on supplements often leads guys to neglect their diet, which causes muscle to break down instead of build up.”

Plus, certain amino acids—including the hulking holy grail, creatine—are highly osmotic. “When bodybuilders abuse amino acids, water gets drawn into the muscles, leading to false impressions in the mirror—what your eyes perceive as muscle growth is actually smaller muscles with water infused into them,” he says. Additionally, too much creatine can cause stomach and GI distress, leading to bloating. To build real bulk, eat a balanced diet full of fresh produce, lean protein, and whole grains, taking supplements only as recommended.

Sleep can be your best friend when it comes to getting ripped—but neglect the relationship and it’ll wreak havoc on your progress. “Sleep is the ultimate tool to optimize your metabolism for fat loss, since it literally recharges your metabolism every night,” says Davidson. Researchers from the University of Chicago found that people lost the same amount of weight whether or not they logged eight hours. However, in dieters who scored an adequate amount, more than half their weight loss was from fat. When they skimped on shuteye, that number was slashed in half. “Not sleeping screws up your body’s sensitivity to insulin and increases your cravings for the wrong foods—both of which dramatically increase your risk of obesity,” Davidson says. Plus, when you cheat sleep it demolishes your hormones—especially your testosterone levels, which are crucial to building muscle. “Studies show sleeping only four hours compared to eight can reduce your total T levels by as much as 60% the next morning,” Davidson adds. If you want to be at peak muscle-building, fat-burning potential, you have to log at least seven hours of sleep a night.

3 Steps To Transform Your Workout To Hugh Jackman’s Routine For His Wolverine Role.