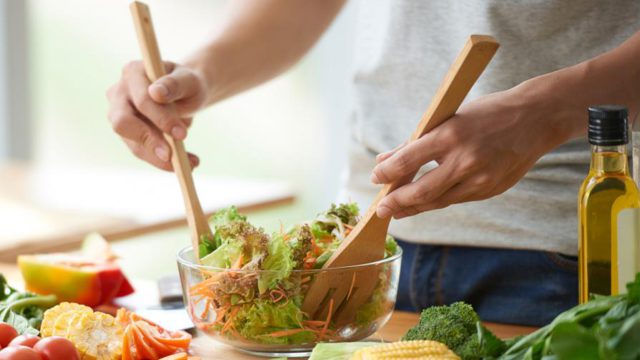 MOST OF US could stand to lose a few pounds,even it if just five or 10. But it’s often hard to get started when you stick to your same old routines of cooking and eating the same foods, and are just cutting back on calories. To jumpstart your weight loss, a new study says, try dropping the meat and going vegetarian.

For the study, which recently appeared in the Journal of the American College of Nutrition, researchers followed 74 people with type-2 diabetes for six months who were put on either a vegetarian diet—veggies, grains, legumes, fruits, nuts, and one low-fat yogurt a day—or one specifically tailored to treat diabetes that included 50% carbs, 20% protein, and less than 30% fat a day.

At the end of the study, the veggie diet won out—with results that showed it was almost twice as effective as the diabetic diet, with people averaging 6kg lost versus only 3kg. And they scanned the subjects’ body fat after the weight loss, and found that only the veggie eaters lost sub fascial fat—or fat layers underneath the band of connective tissue under the skin—and more intramuscular fat was dropped in the people on the vegetarian diet.

“Vegetarian diets proved to be the most effective diets for weight loss,” said lead author, Hana Kahleová, M.D., Ph.D., director of clinical research at the Physicians Committee for Responsible Medicine in Washington, D.C. “However, we also showed that a vegetarian diet is much more effective at reducing muscle fat, thus improving metabolism. This finding is important for people who are trying to lose weight, including those suffering from metabolic syndrome and/or type-2 diabetes. But it is also relevant to anyone who takes their weight management seriously and wants to stay lean and healthy.”

Icing Your Muscles Post-workout May Not Be the Best Way to Recover, After All

4 TIPS FOR INCREASING YOUR VERTICAL JUMP