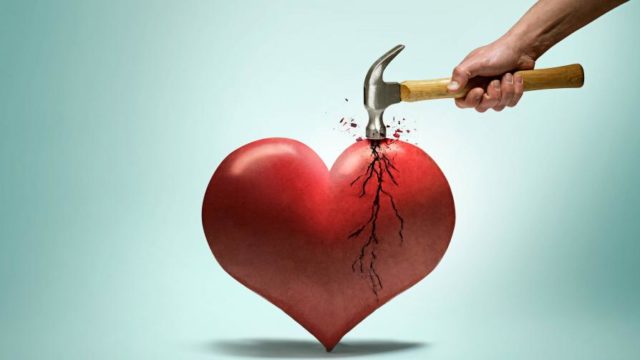 RELATIONSHIPS ARE COMPLICATED, and—although it’s not the most pleasant thought—it’s inevitable that obstacles will come up throughout the course of even the most blissful of them. And while many people expect a little turbulence but don’t give it much thought, some seem to worry constantly about a breakup (looking at you, guy who’s got a multi-phase backup plan in case your girlfriend decides to give you the boot).

If you’re the guy constantly doubting the stability of your relationshipand sizing up the risk of it coming to an end, you may actually be snubbing the flames between you and your partner, according to a new study from Vita-Salute San Raffaele University in Italy. The study’s findings support the idea that feeling like there’s a risk of breaking up can actually become an obstacle in the relationship, and, eventually, cause a breakup.

One way they went about this was giving people statistics about the failure of relationships. Another was giving participants “false feedback” about the odds of their romances ending—which sort of sounds like that one friend who loves nothing more than to insist that every relationship you have is doomed.

Once those people were primed with unsettling ideas about their love lives, researchers asked how committed they were to their relationships, and how they felt about their partners. Compared to people who hadn’t been presented with the possibility that their relationship won’t last forever, they showed weaker commitment and less intense romantic feelings.

The findings suggest that if your head is swirling with fears of potential betrayal or preoccupied with the notion that many relationships don’t go the distance, you may be inadvertently hurting your relationship by causing yourself to be less committed, according to study author Giuseppe Pantaleo.

“Reduced relationship commitment, for instance, leads to dissolution considerations and, thereby, to actual relationship breakup,” Pantaleo says, according to Springer. “Relationship breakup, in turn, plays a critical role in the onset of depression, psychological distress, and reduced life satisfaction.”

So next time one of your friends tries to fill your head with thoughts that you and your partner aren’t meant to be, just try to not get paranoid and dismantle your relationship.

5 CHEST-TRAINING TWEAKS TO BECOME A FREAK

Are you in love? Or are you just lusting after her?

Guardian Muscles: 3 stretches to unlock your hip flexors and generate huge power in...