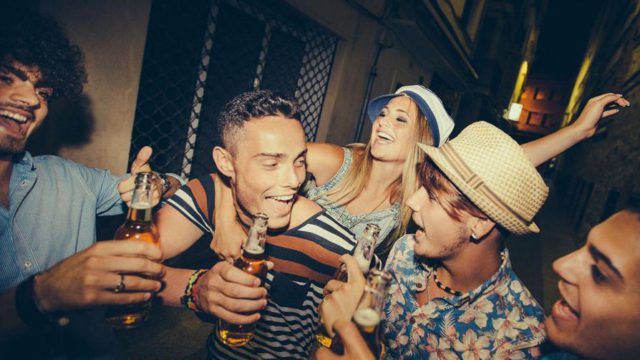 THERE’S NO DENYING it: Cracking open a cold beer at the end of a long day can be extremely satisfying for a lot of us.

And sure, the teetotalers among us would probably assume that the happy feeling comes from the alcohol content. But there’s more to the good vibes than just the booze: A special ingredient found in malted barley can stimulate the brain’s reward center and boost your spirits, according to recent researchpublished in the journal Scientific Reports.

Researchers at Germany’s Friedrich-Alexander-Universität Erlangen-Nürnberg—of course the Germans would study beer—took a close look at more than 13,000 food molecules that activate brain receptors linked to dopamine, a feel-good neurotransmitter. Out of thousands of compounds, the scientists found only 17 that fit the profile of dopamine analogues. One of those 17, called hordenine, is found in barley, which is used to make beer. Hordenine was also discovered to be the most promising of the molecules studied, and activated the receptors for a longer period than the other identified compounds.

“It came as a bit of surprise that a substance in beer activates the dopamine D2 receptor, especially as we were not specifically looking at stimulant foodstuffs,” said study co-author Monika Pischetsrieder, Ph.D., a professor in the department of chemistry and pharmacy at the university.

So by all means, celebrate a good workout with a hearty prost! But you know the drill: Imbibe your feel-good neurotransmitter analogues responsibly.

Schick Hydro 5 has been voted “Product of the Year 2017

Why You Should Think Twice Before Dyeing Your Gray Hair.