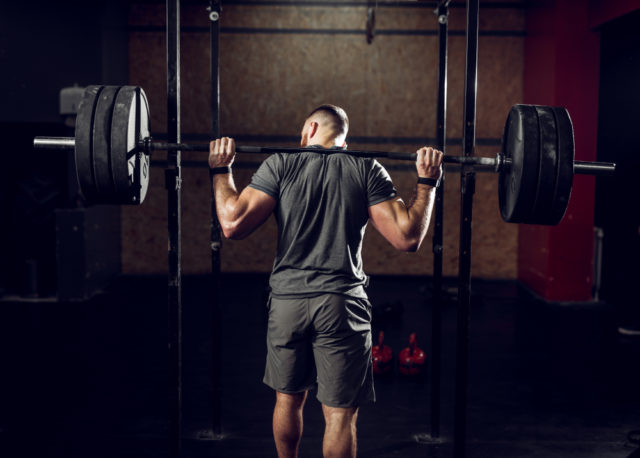 Despite being used by icons from different sects of the lifting community, such as Arnold Schwarzenegger, four-time World’s Strongest Man Zydrunas Savickas, and world champion Olympic lifter Dimitri Klokov, the behind-the-neck-press is still shunned by the masses.

Many people think lifting a loaded barbell behind your head is asking for a shoulder injury, but like most exercises, whether or not you can or should do them isn’t a “yes” or “no” answer—it depends.

It’s hard to pinpoint exactly when the behind-the-neck press went from a gym staple to a stigma. Many bodybuilders used it in the 1950s up to Oand through the Golden Era .

Look up the image on Google and you’ll find images of Arnold, Serge Nubret, and Franco Columbu all performing the move. In the 1980’s, after Pumping Iron brought gym culture into the mainstream, more lay folks began to join the gym.

That’s a good thing, but as more beginners flooded the gym, more advanced exercises —like the behind-the-neck press—became rarities among the mainstream.

Why the Behind-the-Neck Press Was Phased Out.

Misinformation and poor application were the exercise’s downfall.

Most folks don’t fully realize what the shoulder joint is capable of. But being a ball and socket joint, your shoulder is the most mobile joint in your body.

However, if you have a limited range of motion or a recurring injury, then behind-the-neck presses are not the best option. They require a full range of motion, and therefore won’t be comfortable to perform.

Why It Shouldn’t Be Ignored

Its negative reputation is false because the fact is that some folks have the mobility to press a barbell from behind their head and some don’t.

If you possess healthy shoulders and a full range of motion, then congratulations—you can start performing light behind-the-neck presses and build up to heavy sets over time.

How heavy? Paul Carter of lift-run-bang.com can press 365 pounds, pain free, behind his neck.

“The big fuss against [behind-the-neck presses] is about impingement but that’s a far more complicated and individualistic issue than most people realize,” Carter says. He argues that Olympic lifts, mainly the snatch, put you in the same position and that those athletes don’t have major problems.

“I don’t see Olympic lifters complaining about shoulder pain. If you don’t have the mobility to do the press behind the neck, then don’t. But it’s not the boogieman people make it out to be,” he says. “Plenty of people blow out their shoulders from the standard bench press, but I don’t see anyone shying away from benching every Monday.”

How to Behind-the-Neck Press Properly

1. Start with a light barbell resting across your traps, as if you’re about to squat.

2. Place your hands slightly wider than shoulder-width. You can start with your pinkies in the ring of the knurling (the rough part of the barbell) and adjust your hands from there.

3. Tuck your elbows in and then press the bar straight up until your elbows are fully extended.

4. Lower the bar back down slowly.

People who eat French fries 2-3 times per week double their risk of early...