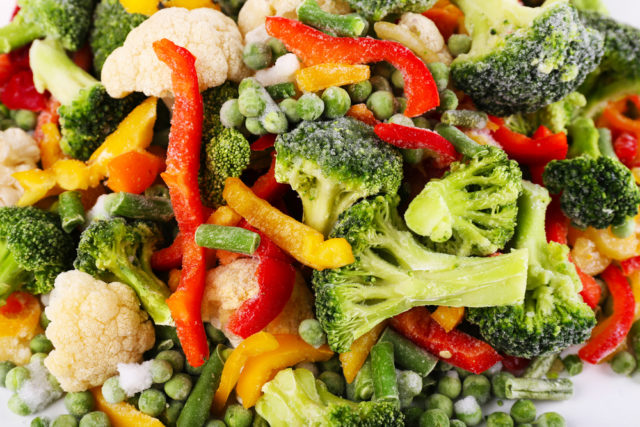 Frozen vegetables are a miracle, especially for people with busy schedules who can’t fathom the idea of sautéing fresh spinach or roasting cauliflower at the end of a long workday. But while that ice-cold block of broccoli may cut down on your cooking and cleanup time, does it actually provide you with the same nutrients as the fresh stuff?

The answer is a resounding “pretty much.” And depending on the type of fruit or vegetable you buy and the nutrients you’re looking for, frozen might even be better than fresh produce.

In 2015, Dr. Ali Bouzari and a team at the University of California, Davis, studied the vitamin content of eight fruits and vegetables (corn, carrots, broccoli, spinach, peas, green beans, strawberries, and blueberries), using both fresh and frozen samples. What they found was that while some produce lost a small amount of nutrients when frozen, there were times when they actually had more.

“It really depends which plant you’re talking about,” Dr. Bouzari said in an interview with The New York Times. And it’s true—while the frozen broccoli had more riboflavin than fresh, the opposite was true for peas. Broccoli was also found to have increased “phenols, carotenoids, chlorophyll, and also antioxidant capacity” when frozen. The biggest issue with frozen vegetables, according to the study, came with beta carotene in the peas, carrots, and spinach, which was found to “decrease drastically in some commodities.”

There’s good news if you’re always on the hunt for easy sources of fiber: the team found that the fluctuations in fiber content was dependent on the specific fruit or vegetable being tested, but on the whole, there was “no significant difference between fresh and frozen.”

“Minerals like iron are almost bulletproof, and the fiber doesn’t care at all whether it’s heated or frozen,” Dr. Bouzari told The Times.

In another study, Ronald Pegg, associate professor of food science and technology at the University of Georgia, found that some frozen fruits and vegetables contained more vitamins A and C when compared to fresh produce that had been stored normally for five days. That’s because produce begins losing nutritional value over time, so once it’s picked, packaged, shipped to stores, and bought by you, your fruits and vegetables are always losing something. Frozen produce, in theory, would halt this process and get you fruits and vegetables at a more vitamin-rich stage.

“Freezing is nature’s pause button,” Pegg said. “It helps maintain the nutritional value of fresh vegetables, even during storage.”

So, fear not. Throw your frozen berries into shakes, cook that rock-hard block of spinach, and toss that icy corn into a big pot of turkey chili. You’ll be getting just as big of a nutritional bang for your buck. Maybe even more.

Taking a test? Boost your performance with a quick workout beforehand.

Should You Exercise When You’re Sick?

THE NEW RULES OF DATING