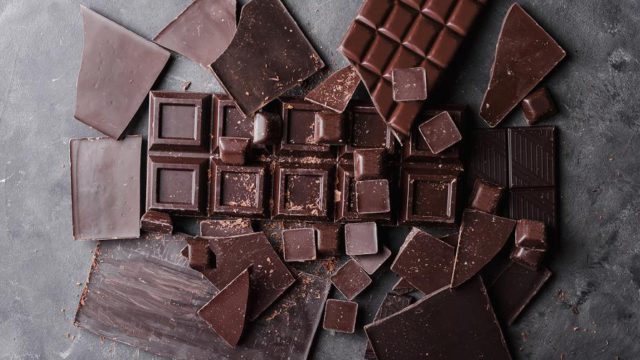 WHO DOESN’T LIKE a nice piece of chocolate after a satisfying meal? Chocolate—especially dark, with at least 70% cacao content—is filled with antioxidants called flavonoids that have been shown to neutralize the free radicals that cause inflammation, chronic disease, and premature aging.

A multitude of studies supporting the health benefits of the sweet treat have been performed over the years, and a new one published in the journal Heart has found another reason to make sure you get a daily dose of chocolate. For the study, researchers pulled data from more than 55,000 people who were enrolled in the Danish Diet, Cancer, and Health Study which provided info on their average weekly chocolate consumption, but not type. It can be inferred that it was mostly milk chocolate, and not dark, as Danish people are known to prefer that type.

The scientists then checked out the heart disease risk factors on the subjects—like diet, lifestyle, and whether or not they smoked—and followed their health over 13.5 years through a national registry. They discovered that those who had 1-3 servings a month (with a serving defined as 1oz) had a 10% lower rate of atrial fibrillation, or heart arrhythmia, than for those who ate less then one serving a month. If they had one weekly serving, that bumped up to 17%, and then to 20% for 2-6 weekly binges. Researchers also found that the correlation had a gender relation—women had a 21% lower risk if they had one weekly serving of chocolate, while men got a 23% reduction if they ate 2-6 weekly servings.

Even though the study authors stated that “despite the fact that most of the chocolate consumed in our sample probably contained relatively low concentrations of the potentially protective ingredients, we still observed a robust statistically significant association,” we suggest you stick with dark chocolate for your after-meal treat. There’s more evidence that eating chocolate with at least 70% cacao content is better for you, and has less sugar, than milk chocolate, which typically only has about 30% cacao.