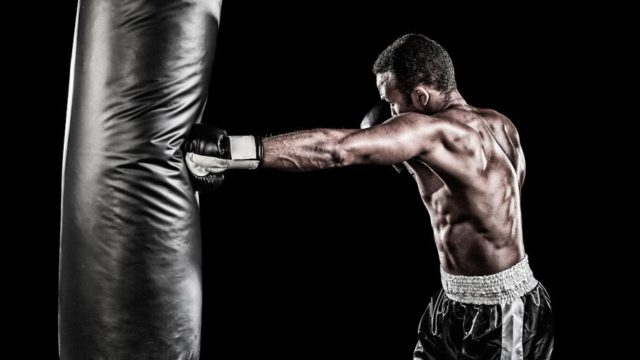 TRAINING LIKE A boxer is all about intensity—you go hard. “You’re trying to mimic what it’s going to be like in the ring,” says Jason Strout, head coach at NYC’s renowned Church St. Boxing Gym. Aside from technique, that means lots of fast and varied movement, with active rest—you’re almost never not moving in a fight unless, well, let’s not go there. “Workouts vary the exercises as much as possible to mimic the fight, which is never a steady pace like a run for an hour,” he says. “The pace is changing constantly.”

Boxing workouts are often long—at least an hour—to fit in a warmup, conditioning, and drills. And when preparing for a match, sessions are five or six days a week. “Rest is very important, but you need to be able to perform under pressure,” Strout says. “The training gets your mind prepared for it, too.”

Think you’ve got what it takes? See if you can go five rounds with these tough sessions designed by Strout.

If you don’t know your jab from your cross, or haven’t a clue how to even stand properly, start here.

The boxing stance is crucial to your success—it sets you up to both throw and dodge punches, and puts you in the best position to take a punch should your opponent land one. If you’re right-handed, your left leg will be in front, so your more powerful arm is further back to maximize the force it can generate. “Southpaw” or lefty stance is the opposite.

To find your stance, start with your feet shoulder-width apart, with your feet standing on the same imaginary line. To get a good stagger, righties should move the left foot forward so your heel is now touching that imaginary line, and shift the left foot back so the toe is on the line. (Lefties do the opposite.) Bring your weight onto the balls of your feet and soften your knees. Bring your dominant fist up so you’re just touching the side of your chin with your index finger, and bring the nondominant fist up to about cheek height. Keep your elbows in close, touching your ribs. “If you let your elbows flare out, it leaves your body exposed,” Strout says. “Keeping your elbows tucked also increases the power of your punches.”

Now, onto the punches. The three basic ones are the jab, the cross, and the hook. 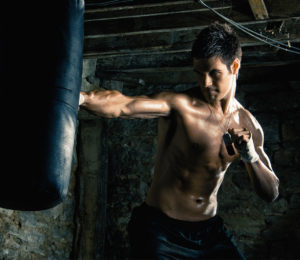 Jab: This is the lead hand punch thrown straight ahead with your nondominant hand. It’s not a power punch but instead is used to set up other punches. “When in your boxing stance, it’s the closest hand to your opponent so you will use it the most,” says Strout. Need an example? Boxers with a good jab include Larry Holmes, Ike Quartey, Muhammad Ali, and Gennady Golovkin. Cue up YouTube and start studying.

Cross: The cross is thrown with the rear, dominant hand, which is farthest away from your target. It’s also thrown straight but much more powerfully, using your legs and torso to generate force. You rarely lead with the cross unless you’re countering an opponent’s punch. Boxerswith a good cross include Thomas Hearns, Sergey Kovalev, Deontay Wilder, and Manny Pacquiao.

Hook: These can be done with either hand, but you should focus more on the hook done with the lead (nondominant) hand (hooks done with the other hand can leave you more vulnerable). Unlike the others, this isn’t a straight punch: Its aim is to come at your target from the side, using your hips and legs for power. “The hook travels out from your shoulder and turns in toward your target halfway through the punch,” Strout explains. “Don’t let your elbow travel out wider than your shoulder, nice and compact, and return it the same way you throw it.” Boxers with good hooks include Joe Frazier, Felix Trinidad, Oscar de la Hoya, and Mike Tyson.

Once you’ve got the individual punches, you need to put them together. Common combinations include:

If you’re new to this kind of intensity, do three rounds, not five, and give yourself a minute rest between them. “Pace yourself,” Strout says. “Don’t go all out in the first 20 seconds, then stop: Keep punching the bag even if you’re just touching it.”

Footwork drills:
2 minutes side steps: Start In your boxing stance, take 10 quick steps to the left, then 10 steps right, side to side. When moving to the right, push off the left foot, and when moving left, push off the right foot.
Rest 30 seconds

2 minutes forward and back steps: In boxing stance, take 10 quick steps forward and 10 steps back, back and forth. When moving forward, push off back foot, and when moving backwards, push off front foot.
Rest 30 seconds

2 minutes circle drill A: Put something on the floor to use as your center point. In boxing stance, step using your technique to make a complete circle around the object, then reverse the circle. “Always make sure you stay in your stance and your lead leg is pointing in the direction of the center,” says Strout. “This is to train you on moving away from an opponent.”
Rest 30 seconds

2 minutes circle drill B: Using the same center point, face away from it, keeping your back to it the whole time. Start in your stance and complete full circles in each direction. “This trains you on stalking a moving opponent,” says Strout.

Is there a difference between red, yellow, orange, and green bell peppers?