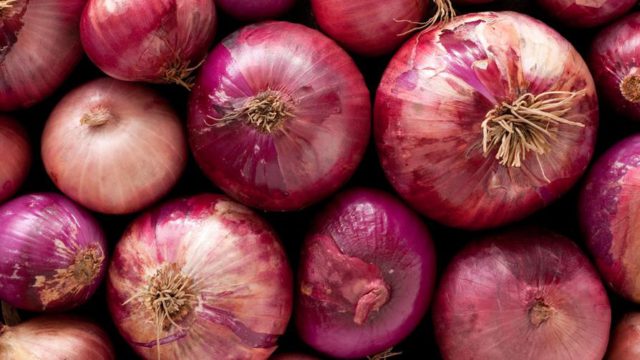 UPPING CONSUMPTION OF fruits and veggies is an easy way to get lots of the flavonoids and antioxidants and other plant compounds that tamp down inflammation, and, in general, help keep all kinds of diseases from popping up later in life. New research from the University of Guelph in Canada has zeroed in on red onions as having some super-high levels of cancer-killing compounds.

Researchers looked at five types of onions grown in Ontario, and found that, though they all had high levels of quercetin—a flavonoid known for neutralizing free radicals—the Ruby Ring onion, a type of red onion, had the highest amounts of the compound. It also boasted large levels of anthocyanin, another flavonoid that boosts quercetin’s antioxidant power.

They then tested extracts of the onion on cancer cells in the lab after extracting the flavonoids with a recently-developed, chemical-free technique, which clears the compounds for use in humans. “We found onions are excellent at killing cancer cells,” said study co-author Abdulmonem Murayyan, a Ph.D. student from the University of Guelph. “Onions activate pathways that encourage cancer cells to undergo cell death. They promote an unfavorable environment for cancer cells and they disrupt communication between cancer cells, which inhibits growth.”

Future research from the team hopes to try the flavonoid extracts on humans and then, hopefully, if that goes well, begin to create red onion extracts that can be added to food, like beverages and baked goods, or taken in a pill to help fight cancer.

LOOK GOOD AT THE GYM