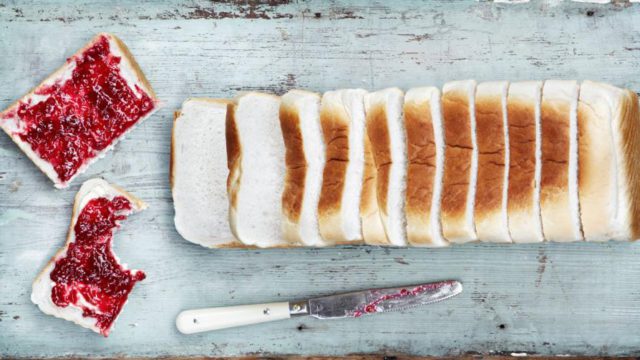 OVER THE PAST few years it’s become popular to banish white bread to the list of blacklisted, unhealthy foods. But a small, new study from the Weizmann Institute suggests the proletarian carb might actually be better-suited for some people than its whole-wheat counterpart.

Researchers randomly enrolled 20 participants who normally got about 10% of their daily calories from bread, according to the study, which was published in Cell Metabolism. In the trial, half the participants got 25% of their calories from processed white bread. The other half ate an equivalent amount of artisanal whole-wheat sourdough bread. (Wheat bread eaters ate more bread in total “because wheat contains less available carbohydrates,” study co-author Avraham Levy explained in a press release.)

After one week of either bread diet, the participants went through a two-week bread withdrawal. They then switched nutrition plans for another week—white bread eaters swapped to whole wheat, and vice-versa.

Over the course of the experiment, researchers looked at the participants’ levels of glucose, circulating fat, and cholesterol. They also analyzed the total amount of calcium, iron, magnesium, kidney and liver enzymes, and signs of inflammation and tissue damage. The researchers also measured the specific makeup of each participants’ microbiomes (the bacteria living in their intestines) before, during, and after the study.

Initially, the researchers found that despite wheat bread’s healthier reputation, there was “no measurable difference” between white-bread-only and whole-wheat-only diets, lead study author Eran Segal said in a press release.

After a closer look at the test results, however, the researchers found evidence that the data had obscured a more detailed result: half the participants responded more favorably to white bread, while the other half had responded better to wheat.

“Different people react differently, even to the same foods,” study co-author Eran Elinav said. “To date, the nutritional values assigned to food have been based on minimal science, and one-size-fits-all diets have failed miserably.”

Of course, this doesn’t mean you should go wolfing down a loaf of Wonder Bread. (There are better sources of carbs.)

What you should do, though, is try to personalize your nutrition plan to your body. If certain foods consistently make you feel like garbage—whatever they are—then it might be your body’s way of telling you that you should work something else into your diet.