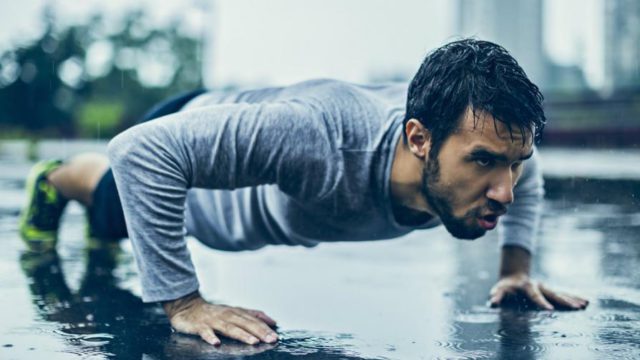 SOMETIMES, HITTING UP the gym week after week can result in feeling like a slog—the weights feel heavier, the treadmill moves slower, and the sweat comes faster. Everyone has bad days at the gym, and for people who are just starting every day can feel like a bad one. But a new study has found that adjusting your perspective in the moment when exercising can make it seem a lot easier.

Psychologists at the University of Freiburg in Germany wanted to see if expectations on the difficulty of an activity can affect how strenuous it feels, so they took 78 adults and plopped them on a stationary bike for a half-hour. Prior to the workout session, they asked them how athletic they were and then gave them compression shirts to wear that they coupled with a video that either talked up the health benefits of cycling or downplayed them. Some also said the shirts would help their biking effort, while others mentioned that they would regulate sweating. All clips were used to try and manage the subjects’ exercise expectations.

The research showed that those with a positive attitude who thought of themselves as athletic found the workout easier, which was not the case for those unathletic participants. But when the compression shirt was talked up to the non-sporting peeps, they showed a significant effect in reducing perceived effort.

“Merely the belief that the shirt would help did help the ‘unsporty’ subjects to have a lower perception of strenuousness during the exercise,” said study co-author Hendrik Mothes, Ph.D., of the Department of Sport Science at the University of Freiburg. The study showed that the findings there can be a placebo effect when exercising or playing a sport, what you think about the activity does make a difference. “Not least, the findings impressively show for all those who don’t consider themselves to be great sportsmen and -women, the right product really can make sport more pleasant, if ‘only’ you believe in it.”

7 tips for finding love in the new year