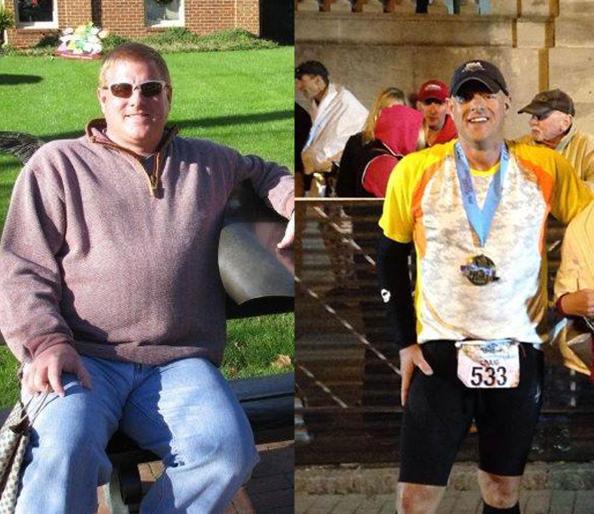 In 2008, I changed jobs and part of that involved applying for some life insurance. Part of that process was to do some blood work and it was determined that I was definitely type-two diabetic. My blood sugars were about twice what would be considered healthy. That tipped things off.

I kind of dabbled around getting into running on my own and wasn’t having too much success with it. I didn’t have a training plan [or] the correct shoes. I happened to have the good fortune of falling into a spin class with a person who was a stranger to me at the time, Amy Livesay. She had a beginner-esque marathon training group. I signed up for it and we met three times a week for about six months and then ran on a blistering hot fourth of July. I finished the half marathon and it was a very emotional moment because I had spent most of my 20s and 30s extremely heavy, with no activity. It dawned on me at that moment that I can do it [an Ironman].

I’ve completely eliminated all refined sugar. I eat fruit and get fructose through apples. I cut out the junk like candy bars and ice cream. I replaced refined sugars and alcohol with things like sparkling water with lemon. When you’re on a bike, there’s no way getting around taking in some Gatorade or other sugar.

In the leadup to an Ironman race, you’re talking about anywhere from 4-6 months of training. I started my work on this one  [Ironman Chattanooga] at about the six month level. It has differed from [the training] for the first once in the sense that I’ve lose the element of fear. The fear just being you’re not going to be able to do a regulation finish.

If I ever do have something in the three disciplines that I’m proud of, it’s the bike. I’m about a B+ on the swim, a C+ on the run, and an A- on the bike.

It’s an easy thing to do, but doing it isn’t a hard concept to grasp as long as you’re willing to do two things. You have to be willing to make a commitment and make sacrifices. Without those two, a 140.6 isn’t going to come to you. If you’re going to do anything of endurance distance — a 140.6 or ultra distances — there’s no way around those commitments.

I was in college and I guess before that the downward spiral was about 2006. One of my best friends passed away and between that and stress from school, I put on weight and got up to 280 pounds by the time I graduated.

It was all my decision. Nobody came up to me, or told me I needed to do something. Out of the blue, I decided I wanted to do an Ironman. In my mind, the first thing I needed to do was run a marathon. I needed running. I was a shot putter and a lineman in high school. I never did any running; I hated it.

Millions of people ask these 10 relationship questions. Do you?