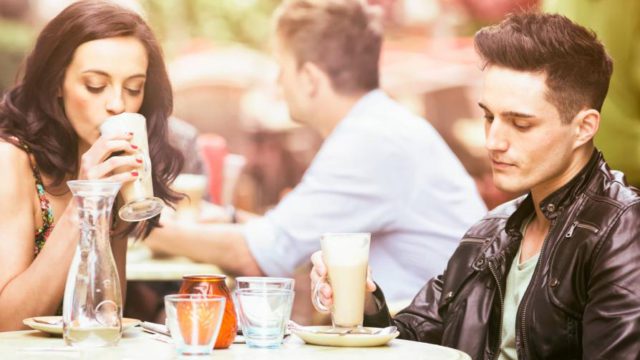 IF YOU’VE EVER tried online dating, you’ve probbaly gone through the pain-staking process of filling out a questionnaire, patiently waiting for your “perfect match,” and scheduling a first date, sweating over every last detail only to find you have absolutely nothing in common in less time it took you to fill out the questionnaire. Not one ounce of chemistry. No spark. Nada.

It’s not your fault, and it’s not necessarily the dating site’s either. A new study from the University of Utah has unearthed a somewhat comforting yet terrifying truth: There’s no tried-and-true formula that predicts attraction.

In the study, published in Psychological Science, researchers analyzed two sets of speed daters who filled out questionnaires covering more than 100 personality traits and preferences. Then, they went on four-minute dates and rated their interactions based on their level of interest and sexual attraction to each person.

The researchers also used an algorithm-learning machine to see if it could predict pairs of people who would be romantically interested in one another based on their shared personalities and desires. Once all the mini dates happened, and the men and women noted who they were into (and who they were totally turned-off by), the matches were compared.

The findings were shocking.

“We found we cannot anticipate how much individuals will uniquely desire each other in a speed-dating context with any meaningful level of accuracy,” lead study author Samantha Joel said in a press release. “I thought that out of more than 100 predictors, we would be able to predict at least some portion of the variance. I didn’t expect we would find zero.”

Turns out there isn’t a way to replicate the experience of meeting someone in real life, according to Joel. So even if two people are a perfect match on paper, it doesn’t mean they’ll hit it off in real life.

“Dating can be hard and anxiety-provoking, and there’s a market there for a short cut,” Joel said. “What if you didn’t have to kiss all the frogs? What if you could skip to the part where you click with someone? But our data suggests that, at least with the tools we currently have available, there isn’t an easy fix for finding love.”

Of course, that doesn’t mean finding love online is impossible.

Optimize your online dating presence. Craft the perfect profile. Select the types of pictures women actually want to see. And learn the best ways to start a conversation on a dating app or site.

Just don’t get your hopes too high until you feel those figurative fireworks in real life.

10 ADVANCED TIPS TO BOOST YOUR STRENGTH

How To Tie A Tie.