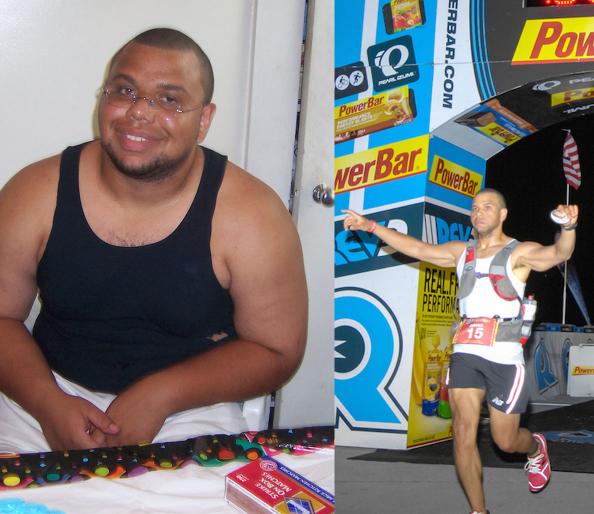 I was in college and I guess before that the downward spiral was about 2006. One of my best friends passed away and between that and stress from school, I put on weight and got up to 127kgs by the time I graduated. It was all my decision. Nobody came up to me, or told me I needed to do something. Out of the blue, I decided I wanted to do an Ironman.

In my mind, the first thing I needed to do was run a marathon. I needed running. I was a shot putter and a lineman in high school. I never did any running, I hated it.

Around 2012, I changed my diet drastically. I cut out a lot of carbs. I cut out fast food altogether. I started eating more vegetables, salads, and fruits.

My first triathlon was in 2012 so I had running experience. It was a sprint; I bought a $50 bike from a secondhand store. I had no idea what I was doing [with] swimming so really all I had was the running. I just decided to jump in and try it. I did that for two years then, in 2013, I did my first Olympic and half-Ironman. I did my first Ironman in September 2014.

I started incorporating a lot more strength training [for Ironman Maryland]. I think squats are one of the biggest exercises. I’ve done a lot of deadlifts. I just started doing power cleans.

I think my favorite discipline would be running and it’s probably my best. I don’t run fast, but I can run for a long time. I’ll say I have pretty good endurance.

I tried losing weight on my own and I lost 31kgs. I was training for a marathon back in 2006. In training for the marathon, because I was still heavy, I ended up breaking up my foot.

I went through gastric bypass surgery and I was alone. I got a heart rate monitor and I went out two weeks after my surgery for a walk. I only made it one mile and I got so tired that I had to

The worst cardio workout mistakes you can make

NUTRITION TO GET JACKED