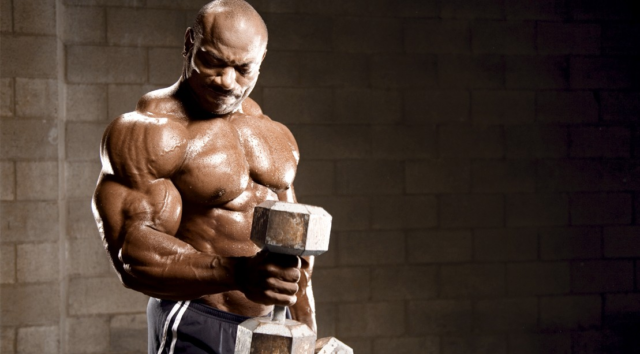 Dexter Jackson has two of the highest-caliber guns ever flexed on a stage, but if you’re looking for the key to bulbous biceps here, the secret is, there is no secret. He does the same things most every other bodybuilder does for moderate volume and moderate reps. A typical routine consists of EZ-bar preacher curls, seated alternate dumbbell curls, and one-arm machine curls, all for four sets of eight to 10 reps. “There are a lot of different ways to do a curl with free weights. and machines,” he says.

His workouts might include a few forced reps and perhaps some supersets, but mostly he performs straight sets. The one constant is quality reps. He doesn’t cheat, and he knows exactly how to maximize the tension on the targeted muscles from stretch to contraction, rep after rep.

Keep reading for six more tips from the former Mr. Olympia, plus five moves that are staples in his workout regimen.
1. Find a Trainer

When it seemed that his physique might actually be fading, Jackson enlisted trainer Charles Glass, a master of hitting all the angles with modified exercises. He’s been Jackson’s trainer ever since, proving you can teach an old dog new tricks.

His shoulder routine seems elementary (overhead presses, lateral raises), but what makes it unique is Glass, who can come up with things like a one arm Smith machine overhead press and an underhand EZ-bar front raise.

2. Know When to Cut Back

This is the part he doesn’t like—all those monotonous meals. “When I retire, I’ll eat like a normal person and weigh less than 200 pounds.” For now, though, eating is a big part of his job. He makes the most of it by spicing up his off-season meals with things like mashed potatoes, turkey bacon, buttered lobster, and steak smothered in sauce. However, when the Blade brings out the cuts during his contest prep, he turns to the diet staples—tilapia, chicken breasts, and sauce-free steak.

The Blade’s remarkable longevity has been possible mainly because he’s avoided trauma. “I don’t do all those crazy, heavy, compound movements that I did when I was younger,” he says. “As I got older, I changed my training. Guys like Ronnie [Coleman] and Dorian [Yates] kind of fell apart at the end because they didn’t change their training. I do more isolation and machine. exercises now. It works for me, as long as I train hard with good form.”

4. Give Machines a Chance

The same principle applies to chest. He built it with the barbell and dumbbell standards, including plenty of bench pressing. Today, a typical routine consists of Smith machine incline presses, seated machine presses, incline flyes, and pec deck flyes.

“The key to arm training is the same key to training anything. You need to feel your muscles working throughout every rep,” Jackson once told us. “Forget about the weight. Focus on your muscles, and focus on those areas of your muscles—like the peaks of your biceps or the outer heads of your triceps— that you want to hit with a particular exercise.”

“One of those things that really bring out the extra qualities in your muscles is posing,” Jackson said. “I can get a great pump from just posing my arms. The thing is, you don’t have to be a competitor to benefit from this. Anyone can benefit from flexing their arms, whether between sets or later at home. It’s going to strengthen that mind-to-muscle connection that’s so important to getting effective workouts. If I have a secret, this is it. Flex your arms.”

My sex drive is slowing down. What do I do?

15 REASONS YOU’RE NOT GETTING RESULTS IN THE GYM

Smoothies Can Be Health Imposters.