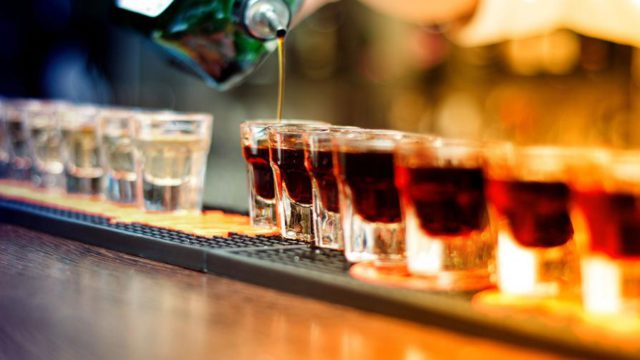 TALLYING HOW MANY grams of protein, fat, and carbs you eat every day can help keep your weight down and muscle definition up,but it requires you to know exactly where every bite fits in these three categories.

No big deal, right? After all, most food and drink breakdowns are pretty obvious—until, that is, you hit happy hour. Where the hell does booze fall on the macro chart?

For instance: With all that malty goodness, beer is obviously a carb, right? Not so fast: Alcohol can swing into either carbs or fat, says Jim White, R.D., owner of Jim White Fitness & Nutrition Studios in Virginia Beach.

Confusing, right? Here’s a primer on how to account for alcohol in your daily macros.

What makes a macro

Alcohol is arguably a fourth macro—though it’s in a league of its own, White says. “Alcohol is of course not an essential nutrient—even if most people wish it were. Alcohol isn’t needed to sustain life, but it does provide calories and energy, two of the main parameters of macronutrients,” he explains.

To be clear: This does not mean you should readjust your breakdown to score 10% of your calories from bourbon on the rocks. But alcohol does have calories, so those have to go somewhere in your daily nutrition chart.

“By itself, alcohol is not a carb, fat, or protein—there are about 7 calories per 1g of alcohol, so from an energy perspective, it’s between fat (at 9 cal/g) and protein and carbs (both 4 cal/g),” says Rachele Pojednic, Ph.D., assistant professor of nutrition at Simmons College in Boston, and staff scientist at Beth Israel Deaconess Medical Center. To metabolize booze, the body converts ethanol to acetaldehyde to acetate, and then shuttles it through the citric acid cycle—which means alcohol acts like both a carbohydrate and fat, she explains.

The truth is you could count alcohol as either a carb or a fat, and you wouldn’t be wrong.

The argument in favor of counting alcohol as fat: Alcohol’s energy density is closer to fat’s (7 cal/g to fat’s 9 cals/g). When you consume both alcohol and fat in excess, both will make you gain weight, White says.

But there’s a pretty strong case to count alcohol as a carb, too. Technically, carbohydrates aren’t essential to life, either (assuming you have plenty of fat and protein). And, like carbs, alcohol also interrupts your body’s fat-burning process, White says. Plus, most beers, wine, ciders, champagne, and mixed drinks also have carbs in them (though straight liquor does not), so you’re already counting at least some of the sips into the carb category, Pojednic points out.

Counting alcohol as macros: How to do the math

Whether you choose to assign alcohol toward carbs or fat, you’re going to have to break out the calculator. Remember how one gram of alcohol doesn’t hold the exact same calories as either a gram of fat or a gram of carbohydrates? That means we have to do a little math. Luckily, the formulas are simple.

But let’s say you want to count that wine against your carb load. There’s 1g of carbohydrate per 4 calories, which means that a 105-calorie glass of wine will add 26g of carbs to your count (105 calories divided by 4g/cal =26g of carbs).

There’s just one catch when counting it against fat: You also have to consider how many carbs are in your drink.

Superman Returns? Man Of Steel Sequel Possibly In The Works.

How to get better at pullups