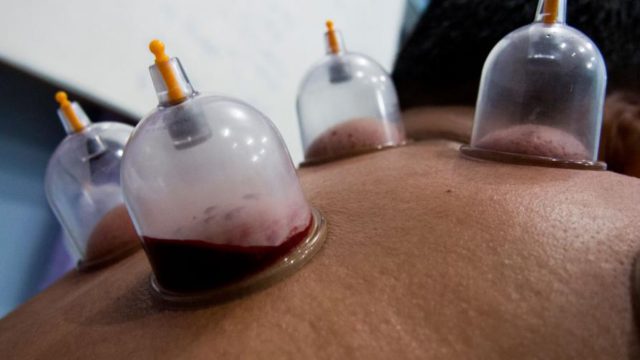 MICHAEL PHELPS POPULARIZED CUPPING WHENhe showed up to the 2016 Olympics with bizarre purplish circles dotting his upper back and shoulders.

But it’s UFC fighter Khabib Nurmagomedov introducing us to a decidedly more extreme variant of the therapy: wet cupping.

In traditional “dry” cupping, “cups are used to place suction over your skin, tissues, and muscles to create a bruise, almost like a big hickey,” says Charles Kim, M.D., a pain management specialist and assistant professor in the Departments of Rehabilitative Medicine and Anesthesiology at NYU Langone Medical Center.

Wet cupping (or “hijama”) ups the ante: The technique draws out your blood.

If you’re squeamish, and you still somehow managed to get past the first photo in this story, then let this be a warning to stop, because Nurmagomedov’s photo of his wet cupping treatment is below, and it is not for people who do not like to see blood.

Again: There is a lot of blood in the next picture.

The process of wet cupping is similar to its dry counterpart, with one exception: Before the cups are applied, the area is sanitized, then tiny incisions are made in the skin using a device called a plum blossom.

“It looks like a long, slender toothbrush with about five metal spikes at the end, which we’ll tap over an area to pierce the skin,” Kim says. “Imagine tenderizing meat. This device is designed to beat the skin and make little holes, so when the cups are applied, the suction draws out blood.”

Next, the therapist will heat the cups with a flame to create a vacuum once it’s applied to the skin. Alternatively, the therapist can use an air pump to suck out any air from the cup and effectively tug the skin up. For wet cupping, the cups are left on the body for five to 10 minutes or longer, causing small blood vessels to burst, which forms discoloration and temporary bruising. You can reduce the possibility of the marks with dry cupping if the therapist applies oils to the patient’s skin, and then drags the cups to various points so they don’t linger on one spot for too long.

“I do it for dry cupping all the time” Kim says. With “glide cupping,” it feels like a pleasant pulling sensation, he says. It’s the opposite of a massage. Rather than pushing and compressing your muscles, you get the release from drawing everything up. As for the wet cupping, yeah, the incisions hurt. But it’s tolerable.

Currently Kim isn’t practicing wet cupping. “I did at Mount Sinai School of Medicine when I was doing cupping demonstrations for the medical students, but it’s just too bloody,” Kim admits. “A full treatment on the upper back, for instance, can get anywhere from a third to a quarter of a gallon of blood,” he adds.

He’s had students faint mid-demonstration: “The blood sits and starts to clot, and get slimy and slushy in the cups,” he says. But patients feel great after—probably even more so than with regular cupping, he adds.

Some people opt for wet cupping over dry, because ancient Chinese medicine suggests it “relieves stagnation and ‘bad blood,’ like bloodletting from the medieval times,” Kim says. “It’s said to relieve congestion and ‘bad energy’ by taking out bad blood so your body creates fresh, new blood,” he adds.

Athletes may undergo a wet cupping session to relieve sore muscles and pain, increase range of motion, and promote faster recovery. Others believe the leech-like nature of the cups can boost immunity.

That said, there aren’t many studies backing up wet cupping’s efficacy—even if it has been used for thousands of years by in China, the Middle East, and among Eastern European countries.

However, one 2009 study, published in Complementary Therapies in Medicine, found wet cupping significantly eased pain in individuals with low back pain after a three-month followup. The participants received three wet-cupping treatments spaced out every three days.

Another 2008 study, published in the American Journal of Chinese Medicine, found wet cupping alleviated migraine symptoms in those with chronic headaches. Headache severity lessened by 66%, the number of headaches per month dropped down to about 12.6 days, and the need to medicate was improved thanks to the ancient technique.

As we noted, all these sucky cups pulling out your blood makes for one messy treatment. “My concerns are infections, because you have to clean the equipment as opposed to just disinfecting cups,” Kim says.

So, what do you do with all that “tainted” blood?

What’s more, there’s no certification to practice cupping. It doesn’t exist. Physical therapists, acupuncturists, and medical doctors practice it, but that means it’s up to you to locate a trustworthy, safe, and competent practitioner. In short, don’t just troll on Groupon for a wet cupping discount. Any medical practice involving blood and no legal regulations is inherently risky.

“I’d do it in a hospital setting where the expert is equipped to disinfect the equipment and dispose of the blood in a professional manner,” Kim says. “The standards of infection control are higher.”

Done incorrectly, wet cupping can lead to infections and skin breakdown. If the cups are left on for too long, the treatment can cause necrosis—death of the tissue, he adds.

Which is better: dry or wet cupping?

“Try dry cupping first,” Kim recommends. And if curiosity gets the best of you and you want to give wet cupping a go, make sure it’s someone who has a lot of experience, works in a clean space, and has good reviews.

Don’t buy a kit on Amazon and try either for yourself. Losing a fight with a cupping kit isn’t pretty…

How a ripped guy works out