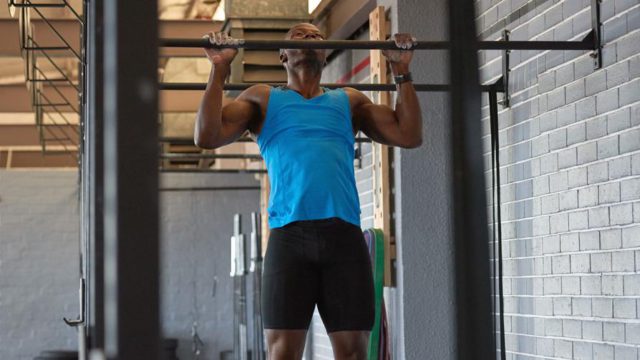 PULLUPS ARE NOTORIOUS for being one of the most difficult bodyweight movements, providing an intense challenge regardless of strength levels. Challenge aside, the pullup puts a huge emphasis on major muscles in the upper back like the lats. Build these guys up and you’re on your way to a wider torso and impressive physique. With so many variations, it’s hard to find out which one is best for your routine and individual goals. We broke down the two most popular variations—the pullup and chinup—and highlighted their differences in form and muscle activation.

The overhand vs. underhand debate

Pullups, done with both hands in an overhand (or prone) grip slightly wider than shoulder-width apart, prove to be the most difficult of the pair. The wide grip isolates your lats, taking away much of the emphasis from the biceps. The underhand alternative—chinups—receives high praise as both a bicep- and back-builder. By utilizing a supinated grip, the chinup utilizes more of the bicep than its wider-grip counterpart. Since more accessory moves are involved to pull the body over the bar, lifters may find that this variation is easier in comparison. Although it still targets the upper back, lifters may have a hard time isolating and engaging their lats during the motion.

Outside of hand position, both pullups and chinups may prove to be trying for many guys simply due to lack of flexibility. Since many lifters spend their day hunched forward in front of a computer, they tend to exhibit a rolled-forward posture—not the best for getting your chin over the bar. According to Dean Somerset, C.S.C.S., “with the back rounded forward the shoulders can’t pull back and down as easily, which makes engaging the lats a hard goal to shoot for, and as a result to complete the movement the biceps have to get the job done on their own.” Lifters may have a more difficult time during the chinup as the hands have to be externally rotated to fully grab the bar. To alleviate this problem and improve performance on both variations, perform some soft tissue work on the chest prior to starting a workout. Also, direct your attention to pinning the shoulders down and back to engage the lats.

To build your back plus increase your relative strength (strength relative to bodyweight), incorporate both pullups and chinups into your routine multiple times throughout the week. They’re great for strength but also as a warm-up exercise prior to a lifting session. Rather than utilizing momentum to power yourself over the bar, keep your form strict to see immediate improvements in strength. Somerset acknowledges that momentum is a key reason many guys aren’t getting stronger.

“There’s a big difference between doing a kipping pullup, which involves a leg whip, and a jerking motion that some people do in their pullups. Focusing on having the strength to do as many reps as possible, and not bombing away with bouncing or jerking to simply complete reps will help a lot of people see improvements,” he says. Improve your upper-back strength by incorporating these workouts that hit both strength and volume into your routine.

Perform the following lift (either chinup or pullup) at the beginning of your routine or secondary to a main lower-body lift like squats or deadlits. Allow at least two days in between sessions for your upper body to recover.