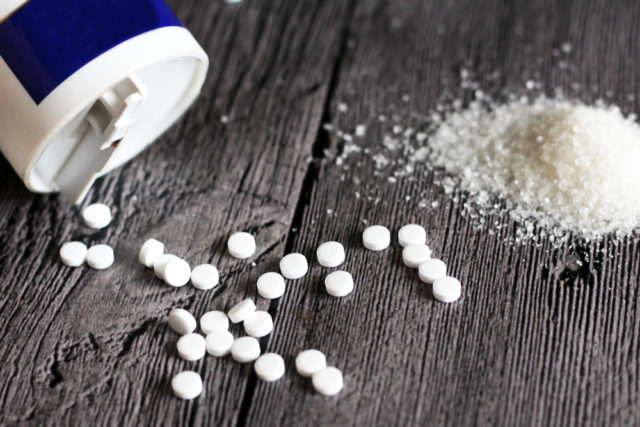 There are no absolutes when we’re talking about how the substances we ingest affect our bodies. No matter what we claim—or what studies claim—we’ll always be proven wrong by examples to the contrary. A perfect example of this is the ongoing debate regarding artificial sweeteners and their effect on fat loss and muscle gain.

How does this apply to you as a bodybuilder? Well, if you’re restricting carbs, you obviously can’t consume sugar on a regular basis. As I’ve said repeatedly, however, if you’re liberally consuming diet drinks and having trouble making progress on an ultra-low-carb diet, the sweeteners in the drinks may be the reason for your stall out.

I’m telling you about this because of a research article published a few months back that’s still resounding in bodybuilding nutrition circles. This particular study showed an increased insulin response as a consequence of pre-ingesting sucralose, the artificial sweetener in Splenda, followed by a bolus ingestion of real sugar.

What this really demonstrated was that just the oral stimulation of “sweetness”— by way of the sucralose—caused an increase in the release of insulin, and poor blood sugar control. This, unfortunately, has been interpreted as irrefutable proof that non-nutritive sweeteners (NNS) make us fat.

A FLY IN THE OINTMENT

The problem with this study, however, is less about the effects of sucralose than it is about the spread of information. What nobody mentions in all this furor is the fact that the subjects of this study were all grossly obese, with body mass indexes over 40—a statistic that becomes more accurate at predicting body fat composition as the number gets higher. You can’t assess this study without focusing on the people studied, and how obese bodies don’t respond the same way healthy ones do.

Sweetness, as far as how the body detects and reacts to it, is something we’re only just beginning to understand. One discovery that seriously challenges our assumption that NNS’s can’t make us fat is the revelation that mammals, including humans, possess receptors for sweetness throughout key parts of our digestive tract. Your body can determine if something’s sweet in your gut the same way it can for your mouth. It’s possible, then, that eating something sweet—even if it has zero caloric value—could cause a hormonal reaction, priming your body to get fat.

To fairly evaluate the results of this study—and this is especially relevant to the bodybuilding community—we need to see if ingesting this same sweetener by itself can cause a reaction in healthy, non-obese subjects. And, shockingly, there’s a study published in 2011 where researchers found no hormonal response to sucralose in healthy subjects. Of course, you don’t hear quite as much about this one, because it didn’t generate sensational headlines like “Coke Zero Makes You Fat.”

We have two studies here with contradictory results, but is that actually what we’re seeing? Or is this more of a conditioned response that obese people have and healthy people don’t? In the case of obese humans, it’s possible that their bodies start producing insulin and other hormones in anticipation of eating, skewing the results of the study—and making athletes think they can’t ingest sucralose.

If you smell, taste, or even think about eating, you might trigger an insulin response before food even hits your stomach. I say “might,” because this isn’t always the case in lean, muscular, athletic humans. In some cases, these people don’t reliably secrete insulin in these situations. Overweight and obese people react differently, primarily from an anticipated response, along with some degree of insulin resistance. Research shows this response to be greater with greater amounts of body fat, and that it can lead to difficulties in clearing blood sugar.

Think about it, though. Obese people have extra body fat in the first place because they’re more likely to indulge in carb-heavy foods more often, and to a greater extent. The body is wise to start its metabolization engine (insulin secretion) early if it’s taking in big loads of carbohydrates on a regular basis. In other words, their engines start for a completely different reason than yours does, and the advice I’d offer them isn’t necessarily applicable to you.

ARE SWEETENERS OK, THEN?

Our discussion of Pavlovian conditioning brings us full circle to a direct examination of sucrose itself. Despite all the vibration in the Twittersphere, did this study show that sucralose actually caused the release of insulin? The answer appears to be no. We can even explore this further, looking at studies where researchers directly inject artificial sweeteners into the gut, bypassing the oral taste sensation. In that case, no insulin response occurred in healthy people.

Going back to my own assessment of the use of artificial sweeteners while on ultra-low carb diets, everything still falls nicely under the aegis of my customary “it depends” response. If you’re not making progress, chances are the sweeteners are problematic for you.

You can’t take a study like this and apply it to everyone across the board. – FLEX