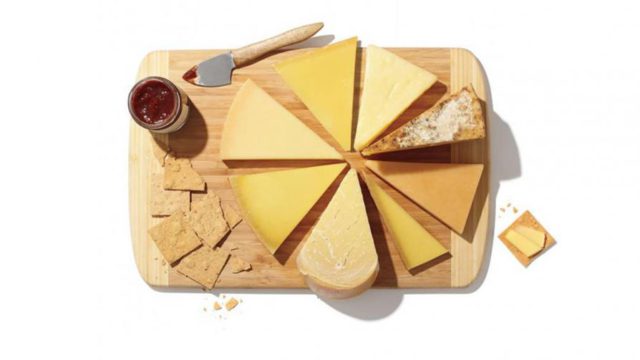 AROUND THE WORLD, few foods are as revered as cheese. Smothered, oozing, sprinkled… it’ll work on virtually anything, sweet or savory, any time of day. But for years, ultra-fit types had blacklisted cheese as unncessarily loaded with saturated fat and cholesterol, fearing that it could clog arteries.

Turns out people who wolf down a hefty amount of cheese and other high-fat dairy products (like milk, yogurt, and butter) aren’t necessarily turning their hearts into cholesterol-ridden time bombs, according to new research from the University College Dublin, published in the Nature journal Nutrition and Diabetes. (For the record, two of the study authors had received speaking fees from Ireland’s National Dairy Council, while the others declared no conflict of interest. So make of that what you will.)

The researchers looked into the impact these foods on markers of body fat and health among 1,500 men and women between the ages 18 and 90. The participants kept a 4-day food log, after which researchers took blood samples and body fat measurements.

Their findings: Cheese heads didn’t have higher cholesterol levels or blood pressure than those who didn’t eat much dairy. Furthermore, the researchers found that people who consumed milk and yogurt tended to have a lower BMI, lower body fat percentage, and smaller waist circumference.

But there’s an important caveat to note: The ‘favorable’ influence of milk and yogurt on body composition doesn’t apply to people following low-fat, high-carb diets. People who ate mostly ‘reduced-fat milks and yogurt’ (low overall fat and saturated fat intake) had the highest scores on a Healthy Eating Index, but higher levels of fat in their blood and total cholesterol, likely due to the bump in carbs.

“We have to consider not just the nutrients themselves but also the matrix in which we are eating them in and what the overall dietary pattern is, so not just about the food then, but the pattern of other foods we eat with them as well,” lead study author Emma Feeney said in a press release.

Bottom line: Full-fat dairy can complement a diet high in vegetables, wholesome carbs, and vitamin-rich protein sources. Milk, cheese, and yogurt have loads of nutrients that can prevent it from hurting your blood cholesterol levels.

But wolf down a whole wheel of gouda and, yeah, you’re not going to do your physique any favors. (Sorry.)

Take a quick lap around your office every day to keep arteries clear and...