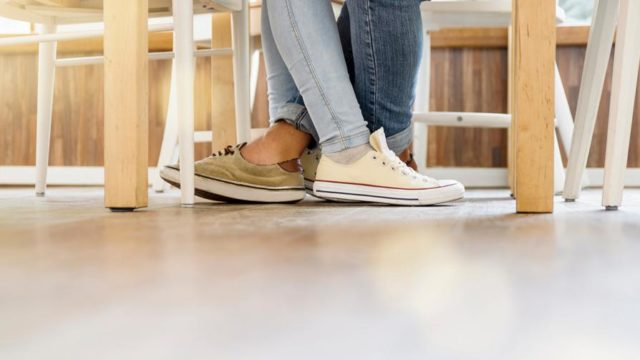 YOU’VE PROBABLY HEARD the claim that men think about sex every seven seconds. While that frequency (more than 500 times per hour) seems extremely high, there’s no denying that guys have sex on their minds at some point during each and every day. It turns out that women do as well. An Ohio State University studyrevealed that guys think about sex 19 times per day (debunking that every-seven-seconds myth) compared to 10 times per day for women.

So, if you’ve wondered why the woman you’re dating or are married to won’t have sex with you, you may have chalked it up to the antiquated theory that guys just think about sex all of the time, while women don’t. But we know now that’s just not true. Since each relationship and situation is unique to the people involved, there’s no one-size-fits-all answer as to why she won’t have sex with you. But, there definitely are some clues depending on the stage of your relationship.

For the guy on the first few dates

Any time you’re starting something new that you’re excited about—a hobby, a job, or a relationship—nerves will set in. It’s natural. It means you care. Just make sure that you don’t overthink things early on.

“Women may be very interested in the guy, completely turned on and really enjoy sex and still want to wait,” says sex and relationship expert Megan Fleming, Ph.D. “Why? Because some women really know themselves. They know if they have sex and orgasm, that releases oxytocin, which is known as the attachment or cuddle hormone. Pacing sex is a way of pacing their emotional involvement because in the beginning, you’re just enjoying getting to know one another and neither of you can predict whether this relationship will last two weeks, six months, or longer.”

Marni Kinrys, owner of The Wing Girl Method and host of the Ask Women podcast, says a lot of women fear the guy will disappear after she sleeps with him. Or she may just have her own personal reasons for waiting.

“It took me nearly two months to have sex with my husband when I met him,” Kinrys says. “I had come off of a bad sexual relationship and was very careful with who I gave myself to sexually.”

When you initially start dating, you have to figure out: Is she interested in me and just taking her time or is she simply not emotionally and/or physically attracted to me?

“It totally depends on the girl and what her beliefs are,” Kinrys says. “But most often if you’re dating a girl, shelling out cash on three or four dates, and there’s still no physical contact, then I’d say you’re a very good friend that buys her meals and you won’t be anything more.”

Kinrys says as long as she keeps accepting dates, replying to contact, and making an effort and progressing physically with you, then she’s into you and you can work together to figure out your sexual boundaries.

For the guy in a relationship

The beginning of your relationship may have been dynamite—over the top dates, nights (maybe even entire weekends) spent sleeping over each other’s places, and now you’re entering that next phase. You’re comfortable with each other, but aren’t aware of all of the little things yet. You’re not sure if you’re not having sex because you said something wrong or the Mexican food at dinner earlier isn’t agreeing with her and she doesn’t want to tell you.

“We all send horrible signals to one another to cover up anxiousness, discomfort, fear, insecurity, lust, and attraction,” Kinrys says.

During this stage, it’s possible that your signals will get crossed at some point. It’s all about how you both handle the situations that arise.

For example, you might want to have more sex, while she just wants to relax and hang out. If a guy has a higher level of libido, it’s possible that she’ll constantly feel pursued and as if the sex isn’t even about her, according to Fleming.

“She might feel objectified and, for many couples, a desire discrepancy can lead to tension on both sides,” Fleming says. “For him, feeling rejected and for her, feeling like it’s not about her and only his needs and personal pleasure. Couples need to talk and let out the air of any tension around frequency of sex so that resentments don’t build up, which creates more distance and difficulty finding a spontaneous or even planned way back to sex.”

For the married man

If you want to have sex and your wife doesn’t, it’s not necessarily because she’s mad at you or you did something wrong.

“More often than not, it isn’t personal and doesn’t have anything to do with the husband,” says Jane Greer, Ph.D., New York-based marriage and sex therapist and author of What About Me? Stop Selfishness From Ruining Your Relationship. “She is probably overstressed, overworked, or overtired—as a result, she’s not in the mood.”

If your wife is usually tired in the evening, Fleming suggests trying to figure out a more optimal time.

“What time of day is better?” Fleming says. “Many prefer morning when they are more rested and relaxed and for men, that’s when their circadian rhythm of testosterone is the highest. Or, is it midday on the weekend? Or before dinner and that second glass of wine that makes her want to drift to sleep?”

Whenever it is, figure out a good time so you and your wife will have more pleasurable experiences together. This way you can stop thinking about sex and start actually having it again.

WHAT ARE ELECTROLYTES, AND DO I NEED SPORTS DRINKS TO REPLENISH THEM?