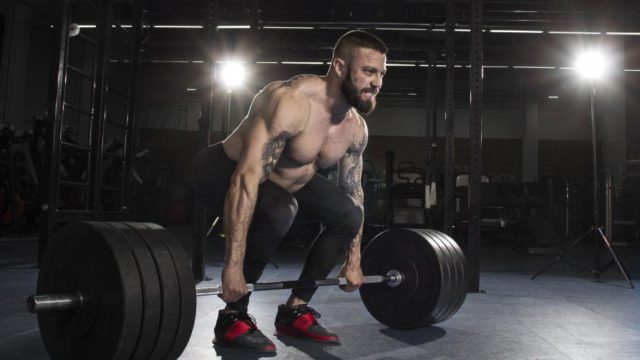 HITTING THE GYM in your trusty, well-worn, comfortable running shoes may sound like a fine idea. In fact, plenty of people do it all the time.

But here’s the reality: Running shoes are not made for lifting weights. If you’re skeptical about going through the trouble of buying new shoes just to lift, we can assure you that you won’t regret it—especially if you’re serious about hitting the iron.

A good way to think about the running-vs.-weightlifting shoe discussion is that every sport has sport-specific gear that you’d probably buy to both look and perform better, and weightlifting is no exception, says McCarthy.

Put another way: Running shoes and weightlifting shoes are on opposite ends of the footwear spectrum, and those differences impact your performance. The most basic—and most important, when it comes to lifting—is that running shoes are cushiony, while lifting shoes are hard. Weightlifting shoes typically feature soles made of plastic or hardwood, which is the opposite of the pillowy soles found on most running shoes. They also tend to have a raised heel, which allows you to squat deeper by reducing the need for extreme ankle mobility in the bottom portion of the squat, McCarthy explains.

Running shoes, on the other hand, usually have heavy arch support. Many also feature a raised toe to facilitate forefoot mobility so that a typical running stride isn’t compromised, and that doesn’t make for a solid base while weightlifting, according to Boyce.

The problems with lifting in running shoes

Running shoes may have their role in supporting the repetitive movement of running, but weightlifting requires a different form of support, says Boyce. When you’re lifting, a rigid sole is best so that the heels can drive into the floor during exercises such as squats and deadlifts.

An unstable surface also inhibits your power output, according to McCarthy. “Any time you’re trying to lift something on an unstable surface, you’re increasing your risk of injury and reducing your output of power because you don’t have the right support,” he says. If you opt for weightlifting shoes and create a solid platform, you can channel all of your power into the lift instead of stabilizing your feet the way you’d have to in squishy running shoes.

Both trainers agree that those squishy shoes can also increase your risk of injury. “If you’re performing compound movements like squats or deadlifts, I can see an increased injury risk due to the fact that your bilateral efforts are positioned on a pair of cushioned shoes that are unstable,” Boyce says. You’re better off with a more minimalistic sole with fewer contours as a base, especially while bearing a heavy load. The more minimal structure of lifting shoes also allows the foot to stabilize itself and get stronger.

Speaking of strong feet, you won’t get them if you lift in running shoes. The arch support of a typical running shoe doesn’t facilitate muscle development in the feet, and even prevents it. “When you’re lifting weights [in running shoes], you’re getting your entire body strong except for your feet, which are essentially encased in pillows that prevent the muscles from being used properly,” McCarthy explains.

Finally, a lack of stability makes it more difficult to learn new movements, leading to poor movement patterns and, over time, injuries due to things such as improper lifts. For example, if you squat on an unstable surface, the knees tend to cave, which puts them under increased pressure and at greater risk of injury.

So, is barefoot lifting an alternative?

You’ve probably seen guys in the gym lifting sans shoes, whether in socks or totally barefoot. In theory, barefoot lifting provides the direct connection to the floor that lifting shoes aim to create. Whether it’s safe for the feet, however, can be a controversial topic.

“Despite the fact that many swear by barefoot training, I believe that most people need some form of support and structure when lifting weights,” Boyce says. In his experience, most people don’t make sure to properly position their feet with a correct arch and foot grip every set. Even when someone does take the time to do so, that position and rigidity can be compromised once the weight gets heavy.

McCarthy doesn’t have an issue with barefoot lifting during powerlifting movements like squat, bench, and deadlift. If you’re going for Olympic lifts (snatch and clean-and-jerk), though, it’s probably a far better idea to wear shoes. Olympic lifts are dynamic—your feet start in one place and end up in another—and that’s where there’s a risk. “If you’re trying to catch a few hundred pounds on your shoulders and your feet are moving, with lifting shoes you’ll hear a pretty loud impact of the shoe on the ground,” McCarthy says. Without shoes, your feet would bear the impact and could potentially get injured.

In the same vein, exercises that involve steps—think walking lunges, rear-leg elevated split squats, and calf raises—can benefit from support. If you perform them loaded with bare feet, they can cause unnecessary stress to the ligaments in your feet, Boyce warns.

The bottom line: Weightlifting shoes are called weightlifting shoes for a reason. They’re designed to help you perform your best and keep your feet from sustaining injuries. The benefits definitely outweigh the cost of an extra pair of shoes if you’re going to get serious and go heavy.

If you opt to go barefoot instead, that’s your call, but get the hell out of those running shoes when you hit the squat rack.

Is it bad if I eat the same thing every day?

The secrets of triathlon training