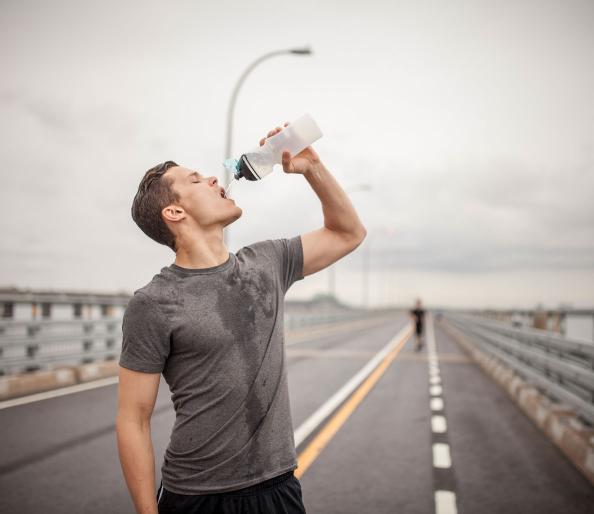 Ironman triathletes compete in a series of three daunting events—a 2.4-mile swim, 112-mile bike ride, and a 26.2-mile run. So, naturally, all that exertion translates to a lot of hydration, right? Maybe not, according to some new research.

Long-distance triathletes and marathon runners actually run the severe risk of drinking too much water and causing hyponatremia, condition when the sodium in an athlete’s blood plummets to a dangerously low levels, according to researchers at the University Hospital of Cologne in Germany. It’s a hydration tightrope: Too little water, and athletes risk dehydration; too much water, and they could seriously throw their electrolytes off balance.

Experts warn that severe hyponatremia can be potentially life-threatenting, according to a CBS report. Hyponatremia can produce nausea, weakness, a drop in glood pressure, and even seizures, according to The National Kidney Foundation. In the case of a 22-year-old fitness instructor who collapsed and died after finishing the 2007 London Marathon, the cause of death was found to be hyponatremia, reported The Wall Street Journal.

In one experiment, researchers analyzed blood samples taken post-race from participants of the Ironman European Championship from 2005 to 2013. The study revealed that out of all 1,089 of the participants tested, roughly 10 % (115 triathletes) documented hyponatremia, and 0.3% (3 triathletes) had severe cases of hyponatremia. The findings led the researchers to conclude that the condition is a serious health risk that threatens participants of long-distance races.

How you can cheat death-by-overhydration at your next big race: experts recommend that you drink only when thirsty, or choose hydration that helps replenish necessary electrolytes—sodium, plus potassium and magnesium—as you rehydrate.

Is diet or exercise more important for weight loss?