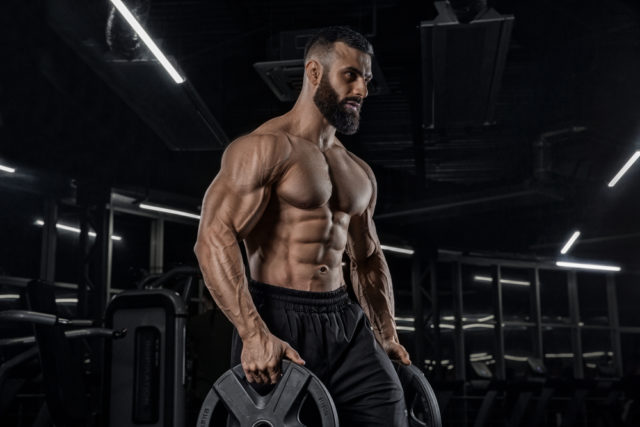 You’ll hear reports about a Hollywood movie star packing on 20 to 30 pounds of muscle in a few months like it’s nothing. Well, most of the time the number is skewed and that added weight includes a lot more fat than that actor is willing to broadcast.

So, that begs the question: Just how much muscle can someone really put on in a month?

“I think definitely a pound or two pounds of muscle. I think that’s very attainable to do that naturally,” says Sebastien Lagree, who was a competitive bodybuilder before he became the founder/creator of the renowned Lagree Fitness Method and inventor of the Megaformer and Supra machines. “Ten to 15 pounds the first year [of weight training] is very realistic for anyone.”

He specifies the “first year” of working out because newcomers to the gym are most likely to experience significant muscle growth compared to a gym veteran, who’s perhaps older.

Curious and determined to confirm Lagree’s synopsis as fact, Muscle & Fitness looked up a bunch of different takes on the subject and almost all agree that one to two pounds—possibly three pounds—is the most muscle someone can really put on in a month.

Earlier this year, celebrity fitness and nutrition expert, Obi Obadike, said it was “virtually impossible” for someone who’s been regularly training to add 30 to 40 pounds of muscle in a year—let alone a few months. However, he did say packing on 18 to 20 pounds in a year is an attainable goal for a new weightlifter. That breaks down to roughly 1.5 pounds per month.

Last September, Brad Schoenfeld, an NSCA Personal Trainer, also told LiveStrong that a beginning bodybuilder can add roughly 2.5 pounds per month to his frame, so that’s keeping it within pretty much the same ballpark that Lagree gave us.

“The body doesn’t like to put on too much muscle at once because then it requires a greater number of calories in those muscles,” Lagree reasons. “The body tries to get more efficient when it adapts to exercise and so, that’s why I think one to two pounds per month is accurate.”

Obviously, having this kind of muscle gain in a month entails following the right workout regimen and what Lagree called “impeccable nutrition.”

But one to two, maybe three, pounds of muscle gain per month is doable.

WIPE OUT YOUR GUT

HOW TO CREATE A HEALTHY DIET PLAN

How to create a healthy diet plan