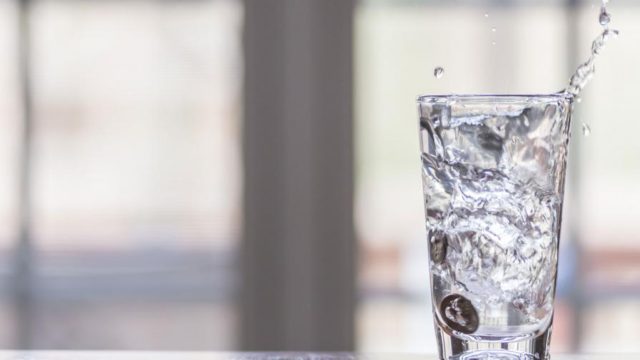 FITNESS AND PUBLIC health specialists often suggest drinking six to eight glasses of water a day to stay healthy and lose weight. Unfortunately, there’s little scientific basis to this recommendation, says Spero Tsindos in an editorial in the Australian and New Zealand Journal of Public Health.

The National Academy of Medicine recommends men get 125oz (around a gallon) of water per day. But staying hydrated isn’t as simple—or as limiting—as filling up a milk jug in the morning and taking the last swig before you go to sleep. Your needs depend heavily on a number of factors: your body size and activity level, the weather, your health, and just how sweaty a human you are. If you’re a big guy exercising in the heat, you’re obviously going to need a lot more water than a smaller person perched on his chair in a cool office all day.

There’s also a misconception that drinking several glasses of water can help you lose weight. The only thing that water does for certain is reduce your appetite. Tsindos points to studies showing that water consumed in food is actually more effective at promoting weight loss. Water even makes up 90% of some fruits and vegetables, like cucumber, eggplant, and kiwi. Research suggests that “eating” our water might be better than drinking it because it’s absorbed more easily, so hydrate more efficiently by filling up on as much fresh produce as possible.

More important, we often overlook other sources of water—such as juices, fruits, vegetables, and other beverages. Many believe that this water doesn’t count, but your body absorbs it in the same way as the ultra-filtered spa water in your trendy aluminum bottle. Everything you consume contains water, and it all counts toward your daily budget. Juice, soda, milk? Almost all water. Coffee and tea rehydrate us, too, says Lawrence Armstrong, an expert on exercise and nutrition. Even beer counts. (But don’t drink a gallon of beer every day.)

Some guidelines suggest you skip caffeinated beverages, which are labeled as diuretics—causing you to lose water by producing more urine. Research, however, suggests that coffee and tea are not as bad as their reputation.

Rather than trying to drink a specific number of glasses of water a day, says Tsindos, you should consider your overall fluid intake. This includes not only tap and bottled water, but also water found in unprocessed fruits and vegetables, and juices—and yes, even coffee and tea.

A few other tips to keep in mind are as follows:

by Shawn Radcliffe and Amos Zeeberg

DEXTER JACKSON PLANS TO COMPETE IN THE 2020 OLYMPIA

15 disastrous scenarios that can seriously haunt your sex life