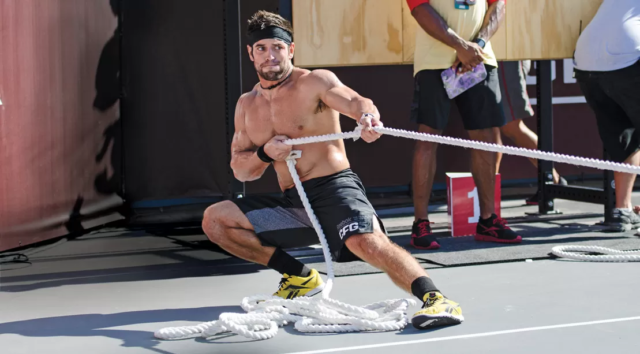 I’m surprised when the guy next to me takes off his shirt in the middle of our workout—not because that’s unusual for a CrossFit class, but because he’s a few feet away from his boss’ boss’ boss: Matt O’Toole, the CEO of Reebok. Like most days around noon, O’Toole is grunting through the workout of the day in CrossFit Reebok One, a 30,000-square-foot gym on the first floor of the company’s new Boston headquarters.

When I’d met O’Toole at the CrossFit Games last year, he’d told me he’s a regular in the class, but I didn’t know whether he was exaggerating. As I watch him in class, though, I start to believe. At 55, he’s fit enough to do complicated gymnastics moves that require serious muscle, like strict handstand pushups and kipping ring dips. And throughout class, the other employees regard him with casual indifference. For O’Toole, this bodes well for his ultimate goal: to make Reebok the global Home of Fitness.

The brand’s shift toward fitness is more of a homecoming than a pivot. Though the company started selling shoes in the U.S. in 1979, it didn’t find major commercial success until 1982, when it released a women’s aerobics shoe. Buoyed by that success Reebok expanded into other markets. Throughout the ’90s, it released products for football, baseball, soccer, and track and then partnered with pro sports leagues, starting with the NFL in 2000. In 2009, though, the brand made a bold decision: to quit an $800 million business and pull out of team sports entirely.

According to O’Toole, Reebok realized there was a new kind of consumer, one who isn’t just a passive spectator. They’re active, style-conscious, and fit-obsessed, and to make the best products for that demographic, the company had to “do more burpees and be in more yoga classes than any other company’s people.”

Around that same time, O’Toole took a CrossFit class. Personally, he was hooked, but he also saw an opportunity as big as the aerobics craze of the ’80s. In 2010, CrossFit and Reebok signed a 10-year partnership.

Soon after, O’Toole got to work on the internal culture. He estimates that 50 Reebok employees were CrossFitters when the two brands partnered, but he wanted everyone onboard. So, in 2011, the company invited all 750 of its employees to a half-day CrossFit seminar, hosted on the lawn of its headquarters, then in Canton, MA. Since then, fitness has become central to company culture. As of 2018, there are 30 classes a day available at the new Reebok HQ, including CrossFit, boxing, spinning, yoga, and aerobics.

Since its CrossFit partnership, sales from training apparel have doubled. And the company has set an internal goal of 100% participation for its fitness programs in 2018. “The secret sauce to sticking with fitness is community,” says O’Toole. “When you have a group of people you’re connected to, it makes it a lot easier to keep coming back.”

From its early days in Bolton, England, to its current form in Boston, the brand has come a long way. Here are some highlights.

THE 6-WEEK DIET AND TRAINING PLAN TO GET LEAN FAST