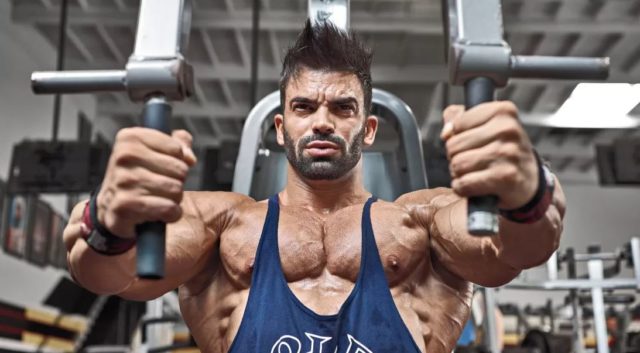 Few industries have been impacted by social media as fitness, and the No. 1 vehicle for serving the bodybuilding subculture is Instagram. It makes sense. The photo-sharing site is ideally suited to feature the phenomenal physiques and physical feats of competitors, personal trainers, and fitness fanatics, who attract followers in the millions and rake in seven-figure earnings as “influencers.” Every kid from 20 years ago who would’ve cut out photos from Muscle & Fitness and put them on his wall for inspiration now just fires up his smartphone and logs on to Instagram.

Today, anybody can build a following and be a star. It’s never been easier to be famous. All you need is a phone and a WiFi connection. But remember to develop an amazing body first.

One of the top personalities on Instagram today is Sergi Constance (3 million followers), an IFBB men’s physique competitor who  nished 12th at the 2017 Mr. Olympia physique competition. Although he’s topped by other personalities like Ulisses Jr. (4.3 million followers) and British sensation Simeon Panda (3.6 million followers—and a former Muscle & Fitness cover guy), Constance is the perfect example of how Instagram has upended the fitness industry. The 29-year-old was born in Spain, hasn’t been on the scene a long time, and didn’t even make the top 10 at the Olympia, yet he quickly rose to Instagram fame. He has more Insta followers than seven-time Mr. Olympia Phil Heath (2.4 million) and four-time Mr. Olympia Jay Cutler (2.3 million). Constance is also a runaway hit on Facebook, with more than 5 million likes on his page. Recently, a brief appearance in Justice League, the superhero blockbuster featuring DC Comics characters, as Zeus in a flashback sequence helped boost his following even more.

Constance’s Instagram account is a prime example of presenting the bodybuilding lifestyle in an appealing way. Of course, it doesn’t hurt that the 6’1″, 215-pound model has smoldering good looks and a classic physique (read: extraordinarily wide delts, flaring lats, a slim waist, and bulging quads), but his mass appeal stems from the fact that he’s always having a good time. He regularly shares his daily life as a successful IFBB athlete: heavy training in Gold’s Gym, Venice, CA, hanging at the beach, consuming nutritious food and supplements, and, of course, showcasing the fruits of his labor. Every physique shot has a professional polish, with clothing and poses that showcase him at his best.

One look at his Instagram account and you know he’s living his best life, and perhaps that’s the true secret of his success and the overall appeal of  tness personalities on social media. Bodybuilding, which started as a small subculture decades ago, is now accelerating to global popularity in novel ways.

At the same time, health trends are worsening by the day. According to research published in the New England Journal of Medicine, it’s estimated that 57% of U.S. children will be obese by the time they reach the age of 35. By promoting the fitness lifestyle in a positive way, Instagram bodybuilding stars are doing more than showcasing themselves—they’re doing a public service by inspiring others to exercise and eat clean. If you’re not regularly on the site, it’s time to join the fun.