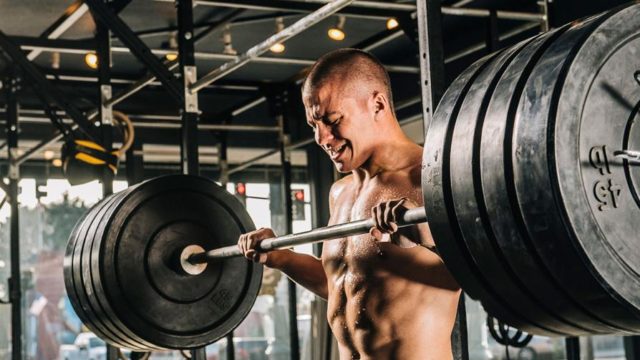 LOOKING AT MARC Megna, a fitness model, former NFL linebacker, and strength coach, it’s hard to imagine he ever had trouble making progress in the gym.

Fortunately, he’s been through the same peaks and valleys as the rest of us, and he’s learned how to enjoy more of the former while avoiding the latter. Here are his tips for overcoming plateaus in fat loss, muscle gain, and strength.

“If you’re dieting strictly, it’s hard to grow muscle because your calories are low,” says Megna. That also means your metabolism will stagnate or get slower, and it will also become increasingly hard to burn fat. “You need to have cheat meals,” says Megna. Make sure you’re getting in at least one high-carb meal a week, and consider adding another if the fat still isn’t coming off. It seems counter-intuitive to eat fattening foods when you’re trying to get lean, but doing so will restart your metabolism and make the diet easier when you return to it. Slashing more calories isn’t the answer.

When you perform the same exercises every week, you’ll reach a point where your body can’t make any more adaptations to them—you’ve become as effective at performing those lifts as you’re going to get (for the time being). “Start changing it up,” says Megna, who trains pro football players for Bommarito Performance Systems in Aventura, FL. “We do bench presses, then the next week switch to floor presses, then board presses the following week.” While the exercises you choose will force you to vary the loads you use, you’ll still be training the same muscles (so don’t worry if you’re using 25 pounds less than you do on the flat bench when you switch to an incline press, for example). The variety in the lifts changes the way those muscles are recruited, so your body won’t be able to figure out what you’re doing. That’ll make you stronger.

Periodization is a fancy word for planning your workouts over the long haul so you can avoid plateaus. The way you do it doesn’t have to be complicated. Megna advocates simply switching up your sets and reps slightly from workout to workout. “You can do four sets of 10 reps, then go to five sets of five, and then three sets of 15.” In this example, you’d have a heavy day (five reps), a moderate workout (10 reps), and a light day (15 reps), so not only does your body not adapt to your training as fast, you’ll also need to allow for more recovery between tough sessions and train the broadest range of muscle fibers.

Megna recommends training hard for three weeks and then spending one week working with lighter loads— maybe 60% of the workload (weight, sets, and reps) you’ve been using. A “download” week allows you to continue training but at a lower intensity, so your body has more time to rebuild after the three tough weeks that preceded it. The next week, you can train heavy again, and you’ll feel more refreshed.