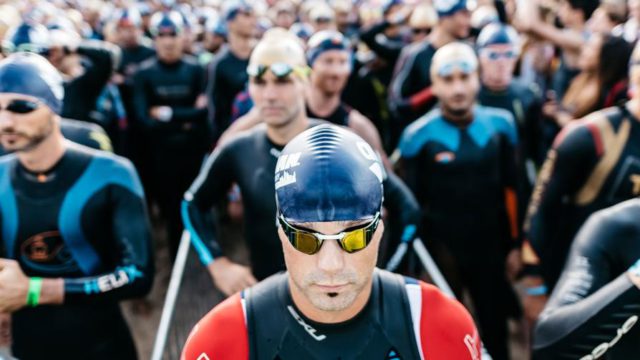 IS THERE ANY better ego-booster than getting to say you’re a triathlete? Although the first triathlon only happened back in 1974, the race has quickly become one of the definitive benchmarks of overall fitness, endurance, and athleticism.

More intense than completing a marathon or biking a century, nothing says “I am fit” in quite the same way. And the sport is only gaining in popularity. In the past five years, the number of triathlons has more than doubled to nearly 2,000 events around the globe. There are a remarkable 2 million competitors taking part in races each year. In other words, if you’ve ever dreamed of crossing that triathlon finish line—even if it’s not in first place—there’s no better time to take your mark.

You don’t need to be in perfect shape to take on a triathlon, says Libby Burrell, director of sports development for the International Triathlon Union. “You just need a clean bill of health.” If you’re not a natural runner, biker, or swimmer, spend some time brushing up on your skills. Then, when you feel ready to start an overall training program, Burrell suggests looking for a local race that’s at least eight weeks away. Make sure the training program you create includes a good mix of endurance, strength, and speed work—but don’t go crazy and try to do too much too soon. “It should fit in with your work and family life, and still allow sufficient recovery time between workouts,” she says.

When it comes to training for a triathlon, nobody knows more than Chris McCormack, the 2010 Ironman champ and author of the book I’m Here to Win. We asked “Macca,” as he’s known, to guide you through your first race:

– Transitioning from training in a pool to swimming in open water
– Swimming in a crowd
– Paddling against a current or waves
– Swimming one continuous distance, instead of laps across a pool

“Find a good position on the starting line. If you’re a strong swimmer, migrate toward the front; weaker swimmers toward the rear. Expect to be hit and climbed over during the swim. It’s a normal part of the race. Make sure you also take your time putting on your wetsuit correctly. Pull the excess rubber up to loosen the material around your shoulders. This gives you a much bigger range of motion so you don’t blow your shoulders.”

“Make sure you know the exact location of your bike and how to get to it after the swim. Putting a towel or a balloon up next to it will make it more visible and can save you a bunch of time. Also, make sure you have your bike in an easy gear for when you mount it after the swim. All your blood is in your arms so you’ll feel strong, but you need to remember you don’t have the same sort of power in your legs after the swim—at least not initially. Finally, always ride one gear easier than you feel is possible in the earlier stages of the bike. It’ll help you to maintain your energy level. Build intensity as the ride progresses.”

“Running in a triathlon is difficult. Off the bike, concentrate on shortening your stride and picking up your cadence. Trying to stride out is not your best option. Shorter strides with a higher cadence will help you get the blood back to your running muscles quicker. Another word of warning: Whatever pace you’re running out of the transition area, it’s too fast. Even if it feels easy, it’s too fast. Trust me. The run is where it all happens. Fatigue starts to set in. This is where the entire race for everyone unfolds. Concentrate on your rhythm and staying hydrated. The key to running your best triathlon is to be able to finish faster than you started. If you can control your output, nothing feels better than passing people toward the end.”

Never worry about where you’re going to place, says Burrell, especially if this is your first triathlon. “Finishing should be your only goal.” Macca agrees. “Remember, you will get through the race and you will have a blast doing it. Enjoy the overall experience. Smile for your finish photo and keep your head up!”

1. Always allow at least 2–3 rest days per week.
2. Alternate skills. You should never train for the same activity two days in a row.
3. Always vary intensities between practice sessions.

THE BEST NUT AND SEED BUTTERS FOR HIGH-PROTEIN DIETS

11 REASONS YOU HAVE NO ENERGY